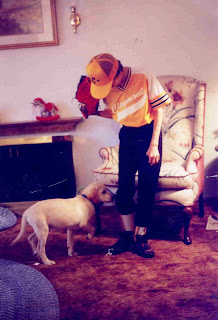 We got the old dog back in 1992 from the Humane Association, the same year my son made the 10-Year-Old Little League All-Star

Team.It wasn't my idea. I was against the idea. Not that I disliked dogs, but we had some cats and my wife was often annoyed by the barking of a neighbor's canines. I had lived with dogs all my years growing up and knew their ways and needs. She had never had a pet as a child and only our Iguana, hamsters, gerbils and cats up to the point she said we should get a dog. She had already announced this decision to the kids and I was voted down along with the standard agreement that she and they would feed, care and walk the animal. You know how long that agreement lasted - about as long as peace treaties in the Middle East or a politicians campaign promise. The dog may have been my wife's, but I was the dog's. Oh, it didn't just happen overnight. It was an insidious, but unstoppable process. It began with the request I walk him, because he was too rambunctious and strong for anyone else to control, she feared he might get loose and run into traffic. Thus it began and soon he was mine and I was his.

I walked him twice everyday (sometimes three times) for eleven years and he was a good dog. He never went to the bathroom on his walks so didn't force me to carry plastic bags of his leavings. This was good, but had an occasional downside. If he felt the urge for either bodily function, he would turn and hightail it for our home and yard. This was hard on me, keeping up and hanging on and expecting a heart seizure at any moment.

But Labs are old at eight and after eleven years he slowed down and walks were hard on him and grew shorter and shorter, and when he sighed at the mere thought I gave him rides twice a day in the car. I'd take him around the countryside and he would watch the scenery and nod to the other pooches we passed with a "look at me" wink.

He is too old for even that now. He can't climb up into the car anymore with his bad hips and poor feet. He hobbles across our floors and we must aid him out to do his business. We live in a home with no ground level entries. There are always steps to get up and down and sometimes he manages, but most times he doesn't. We help him do that, sometimes with a towel beneath his belly to support him, sometimes just holding his sides because he has loss enough weight we can lift him now.

I don't know how much longer he will be with us. He was always the good dog and he obviously wants to stay. He sleeps a lot. He doesn't complain. He dreams a lot about running, I think, for his feet go during naps. He is happy for our attention. He trusts us.

I'm getting old myself. Sometimes my legs ache when I go up and down those same stairs as he. And just as he trusts us and depends on us to hold him up and guide him in his weakness, I trust in God and depend on Him to hold me up and guide me in my weakness. I thank God that he brought such a wonderful animal into our lives. The Wolfer may be old and decrepit, but is a puppy at heart. 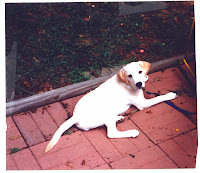 (The music on the slide show is "Old Dogs", written and performed by Bill Stains, copyright 2007 by Red House Records.)