I have friends who are poets and I have friends who have no time for poetry. Some view it as wasted words often too obtuse to be deciphered. Some decades back I wrote a piece on Robert Frost's poem, "Design". I don't agree with either conclusion I believe the poet was hinting at. I believe there was design in the creatures and plants descrived by Frost, but agree in the uncertainty that their meeting in the scene he saw was designed for that moment. He contemplates two choices, one of predesitation and one of chance. He leaves out any other possibility. I opt for a third, but do not wish to delve into the deep waters of that theological discussion here. I merely want to say to those who think poems only frothing words of no substance that the vast and varied fields of ideas between each line are wide and fruitful. 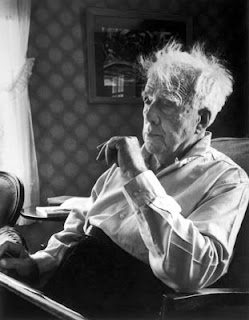 DESIGN
by
Robert Frost
I found a dimpled spider, fat and white,
On a white heal-all, holding up a moth
Like a white piece of rigid satin cloth--
Assorted characters of death and blight 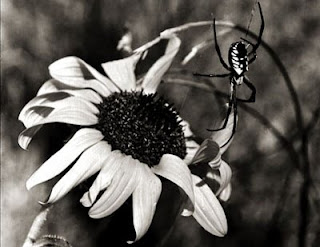 Mixed ready to begin the morning right,
Like the ingredients of a witches' broth--
A snow-drop spider, a flower like a froth,
And dead wings carried like a paper kite.
What had that flower to do with being white,
The wayside blue and innocent heal-all?
What brought the kindred spider to that height,
Then steered the white moth thither in the night?
What but design of darkness to appall?--
If design govern in a thing so small.

The sonnet “Design” is Robert Frost’s vision of forces beyond nature. The title is the basic motif. The poem is developed by carefully counter pointed images. The images display the ambivalent questions in the poet’s mind. These questions present an antithesis: Do the innocent exist haphazardly or do they exist enslaved to predestination?
The poem’s meaning revolves about the image-motif of “whiteness”, the traditional symbol of purity and innocence: a “white spider” upon a “white heal-all” holding a “dead white moth”. This “white-on-white” theme is further supported by such light terms as “morning”, “snow-drop” and “frost”.
There are several possible meanings for “white”. The first is a depiction of “innocent”. The spider is “kindred” to the Heal-all, therefore also innocent. This innocent motif is carried by other images. The spider is “dimpled...fat and white”; something fed, healthy and new, such as a newborn baby. The moth is held like “rigid satin cloth”; the baptismal gown of the baby at the font, the wedding-gown of the bride at the alter, both innocent portrayals. The “innocent Heal-all’s” name symbolizes cure, health and even resurrection, rebirth, new life. These “assorted characters” are “ready to begin the morning’. They are as fresh as “snow-drops”, “flowers”, and as light as “froth”. The spider carries the moth like an innocent child carries a “paper-kite”.
Counter pointing the freshness and innocence is the presence of death. Here the image-motif “white” takes another meaning. “White” is paleness, ill health, the pallor of death.
White is non-substance. It has the strange ambivalence of “nothingness” that can be colored either “black” or “white”. In this poem, “white seems to contrast with the “darkness”, but are these really separate images? “Darkness” is man’s ignorance, a cover over truth, hiding the “design”. Darkness may be the cloak of evil intent. “White” may be something else.
There is more to the image-motif of “white” than innocence. The “innocent”, after all, are gathering “characters of death and blight”. Indeed they are. Spiders, as any reader of gothic literature knows, are associated with death, decay and evil intent. Moths are symbols of plague and blight. Even the “innocent Heal-all” is a member of the “gathering’, for its healing powers are superstition, and is used by those whose final hope is to cure the incurable.
In this new “white” motif, the “rigid satin cloth” is not the baptismal gown, but the lining of a coffin. The light “froth’ dissolves and beneath its insubstantial surface boils the putrid “brew of witches”, most certainly brewed with evil intent of insidious design. The innocent child carrying a kite becomes the bearer of a corpse. The “paper-kite” is broken and will not fly again. All this revels the darkness.
What does the darkness contain? What appalls?
Throughout the poem is the basic motif “design”. The “assorted characters” are “mixed” like “ingredients” in a recipe. The spider is a “Snow-Drop Spider” famous for spinning webs of symmetrical and intricate design. Moths and butterflies are collected for the design of their wings. Is there “design” in their fate as well? Is it of evil intent?
The poet fears such “design”. His “characters” are presented as innocent. They represent possible victims of some great “design’. This “design” is usually hidden behind the merciful “darkness” of our ignorance. The poet has had a glimpse of this “design’ and it frightens and appalls him. He uses appalling creatures to represent his vision, for if such a “design’ exists then everything is predestined and we have no control over our fate.
As an afterthought, the poet states that such a “design” would not extend to such insignificant creatures. What occurred was not “design”. It was accident. There is no evil intent, no reason to be appalled.
There is still something else. The “darkness” hid something, which the poet saw. In the night a white spider climbed a white Heal-all and killed a white moth. We return back to the white-on-white motif for our answer. The darkness hid -- nothing! The poet saw a chance event of small creatures and invented a litany and ritual, a design of froth. The froth dissolved and reveled no “design”.
The poet tries to comfort himself by saying if there is a grand “design”, it does not extend to arachnids and lepidopteron. But if there is a grand “design”, does it apply to mankind? The poet ends wondering if there is any design” or only a “white-on-white” nothingness that man must fill himself.

"On Design", by Nitewrit, Temple University, Philadelphia, PA 1970 and collected in Tomb of the Temple Tomes 1972. 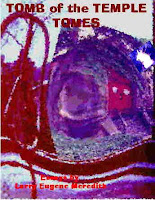 Email ThisBlogThis!Share to TwitterShare to FacebookShare to Pinterest
Labels: A BOOK Weeping a Night Rejoicing the Morning, my history, poetry, Written 2008 in Delaware