Nitewrit the Carney: Having a Fun Day 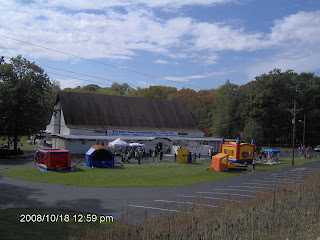 This past Saturday the church I attend had a Community Day BBQ. Besides a lot of good food, there were games and small rides.
It wasn't a fund raiser. The churches I have attended do not practice fund raising. Those who worship here supply the funds as the Lord leads them.  No, everything in our little carnival was free, no one paid a cent, not to get in, not to eat, not to play a game or take a ride. We offered our neighbors a fun day, food and free Bibles if they wanted one. 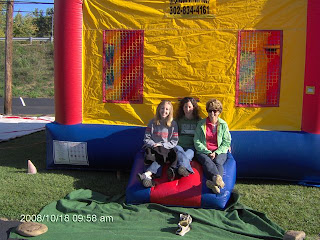 We opened up at 10:00 and ran the fair until 3:00. Most of these pictures were taken early. In got more crowded as the day progressed into the afternoon.
This lady and her daughters were there to man the Moon Bounce.
We had live music playing by different talented musicians all day and in the afternoon the Zoo brought some animals out for demonstrations and petting. 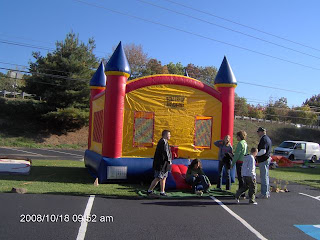 Most of the booths were blowups. That's the Moon Bounce, or possibly by the shape, was called the Castle Bounce here.
It was wall to wall kids inside by noontime. By the way, the heavy-set man on the left is my Pastor.
The tall fellow on the right wearing the motorcycle hat is my Sunday School teacher. 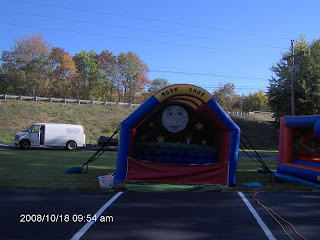 Here is where I became a Carney, the Moon Shot.
You can't see the balls floating on jets of air toward the back, but the object was for the players to knock those balls over with pitched balls.
Had a little problem. The original targets were about the size of a soccer ball, but none came with the booth. When a man came supposedly with balls for this, they turned out to be balloons. I placed a balloon over the air jets and it shot right out the roof of the booth and disappeared.
I ended up using two of the four pitching balls as the floaters.  Smaller targets, but at least they stayed atop the air jet and didn't disappear into the wind. 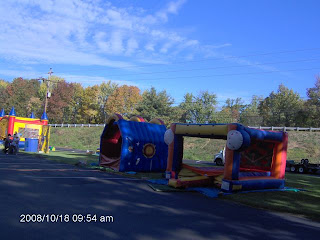 Next door to me was a batting cage game. It was run by Modesty, a young woman in our congregation. Ah, she had it easier. A ball would be batted off an air jet tee toward holes to the rear of the booth. But the ball after hitting the back would roll into a groove in the center of the floor, roll down the groove to where the air jet was then drop into a bag along side.
I had to retrieve all the balls thrown in my booth. Back and forth I went all morning. It wore me out and if the ball stuck toward the far back of the target area, when I reached back to get it, the air jets would blow my hat off. Oh, the sacrifices we make! 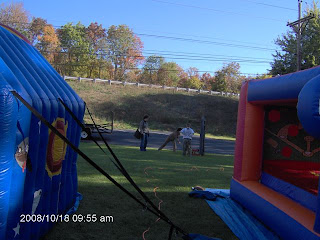 The device you see between my Moon Shot and Modesty's Batting Game is a strength tester. You know, you strike a board with a big hammer and it sends a stick up the chimney to strike a bell...if you have the strength. Wasn't too hard, several small children were ringing the bell, although the person running it sometimes helped.
A teenage couple came by and the boy went over to hit the bell. Bang, and the stick rose a few inches. he tried several times and couldn't ring that bell. His girl friend was laughing, but he took it well. 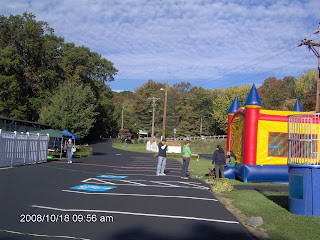 Of course, as I said, there was no fee to play, no ticket to ride, and everyone got to choose a prise out of a basket win or lose. Just a fun day. 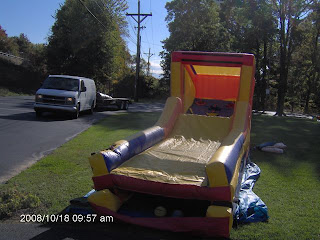 This was another game, skee ball. 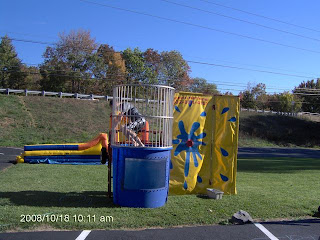 Ah, but here is what drew a lot of attention. Hard to believe we church folks can be so sadistic, isn't it?
The dunk tank.  Somebody sits up on a board and people throw balls at a small target. If they hit the target, the sitter gets dunked in the tank. This is our Youth pastor climbing out of a dunking. 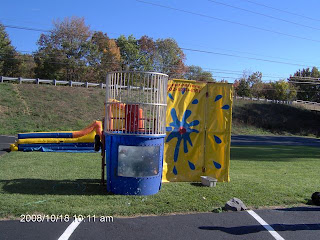 Oops, their he goes again into the tank.
When I walked over to the church from my house (about a mile), it was 45 degrees Fahrenheit with a stiff wind blowing. It probably felt as bad climbing up on the board after the dunking with that wind as it did hitting the water, which was just cold tap water. No heated tank.
I tell some more about this later 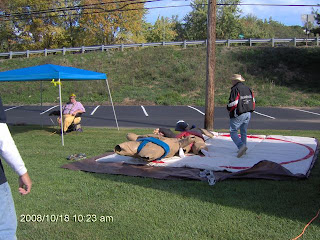 I had a lot of youngsters and little kids at my booth. Popular with the adults was the Sumo Wrestling.
See, you climbed into these puffy suits and became Sumo stars. Problem here is you had to lay down to wiggle into the suits. 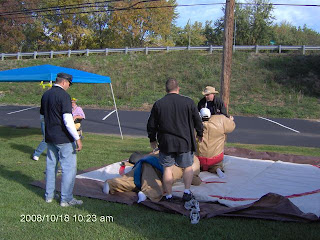 Once contestants were suited, they became more turtle than wrestler and couldn't get up. People had to lift them to their feet.
You had to help them up anytime they fell over too.
Twice I was almost wiped out by flying Sumo Wrestlers while snapping these photos. (Again that is my Sunday School teacher and my pastor with backs to you.) 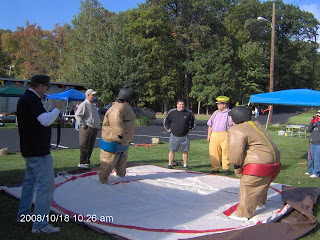 As my Sunday School Teacher prepares to take some pictures of his own, the wrestlers get ready to strike a proper pose.
Actually, my Pastor and the fellow in the yellow pants next to him could play Sumo without putting on the suits. 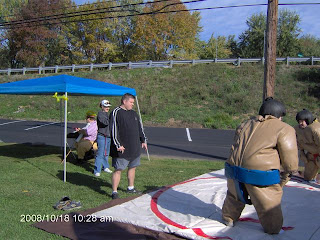 We have a very good Pastor and he has a great sense of humor.
He'd probably make the same remark himself. 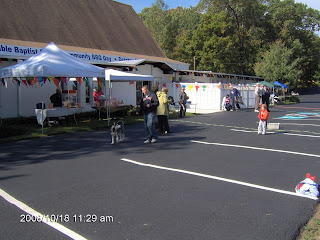 Even pets were welcome.
Here on the midway we had the popcorn and cotton candy concession.
I love fresh popcorn, so i made sure I got a bag. 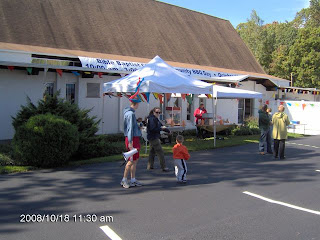 Our Youth Pastor as barker, walking around in a crazy balloon hat with a bullhorn calling people to the events. 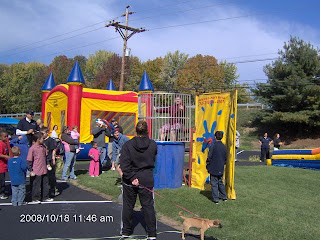 Ah, yes back to the Dunk Tank.  That's our Pastor on the board now. Last Sunday they had a ballot in church to elect the five people we'd most like to see in the Dunk Tank and they actually did it.
All but the number one selection, one of the leaders in our church and something of a character and ex-Marine. They had a sign up, that he said he had to work, then the note, "what kind of an excuse is that for a Marine". My daughter, who was in the Army, but served under a Marine Command on one tour of duty got a kick out of that.
Note the Youth Pastor around the corner of the tank about to take aim at the target. 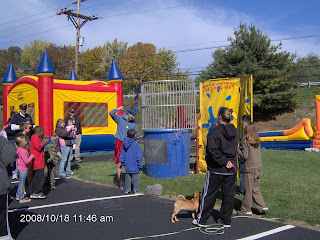 "Yeeeessss, got 'em!" he yells as the Pastor disappears under water.
I had told the pastor I hoped he'd be able to talk on Sunday to give his sermon.
He was. He spoke on "What God told us About how to Handle a Financial Crisis". 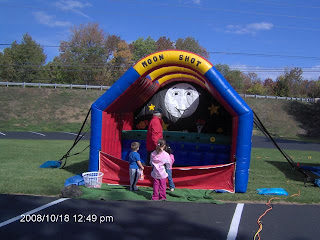 Here is the Moon Shot again. That is not me inside. That was the fellow they drafted to relieve me.
I was very grateful. As I said, after over two and half hours, I was worn down.
Now I could go get something to eat. 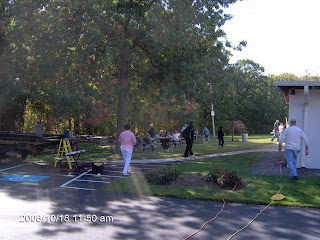 Just following these folks heading for the barbecue. 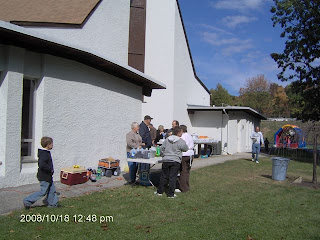 I had a good meal here, barbecued chicken, potato salad, cole slaw, a shrimp-pasta salad, baked beans and a cupcake.
Tasted pretty good after that workout in the cold air running the Moon Shot.
I even ate the shrimp, which is something I don't like.  Nope, not a seafood lover. 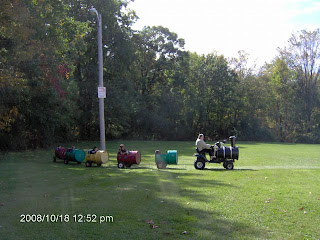 And so my day kind of ended, but the party and the train chugged along for a couple more hours after I left.
We had some new faces in church this morning, people who came to our Community Day and decided to visit our service. All but one of our free Bibles was given away and it looked to me as if everyone who came had a great time.
Posted by nitewrit at 12:42 PM