Birth of Christ: A Preview and Preface 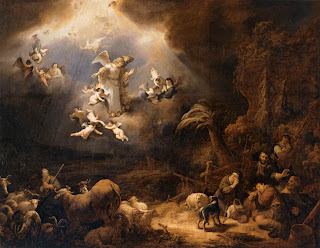 Nevertheless, there will be no more gloom for those who were in distress. In the past he humbled the land of Zebulun and the land of Naphtali, but in the future he will honor Galilee of the Gentiles, by the way of the sea, along the Jordan-The people walking in darkness have seen a great light; on those living in the land of the shadow of death a light has dawned.

You have enlarged the nation and increased their joy:  they rejoice before you as people rejoice at the harvest, as men rejoice when dividing the plunder. For as in the day of Midian's defeat [Read Judges 6 and 7], you have shattered  the yoke that burdens them, the bar across their shoulders, the rod of their oppressor. Every warrior's boot used in battle and every garment rolled in blood will be destined for burning, will be fuel for the fire.

For to us a child is born, to us a son is given, and the government will be on his shoulders. And he will be called Wonderful Counselor, Mighty God, Everlasting Father, Prince of Peace. Of the increase of his government and peace there will be no end. He will reign on David's throne and over his kingdom, establishing and upholding it with justice and righteousness from that time on and forever. The zeal of the LORD Almighty will accomplish this.  Isaiah 9:1-7
Tomorrow I will begin my own Twelve Days of Christmas. There won't be a partridge or pear tree in sight, but plenty of Angels, shepherds and Wise Men.
Have you ever considered the name of this Holiday, Christmas? What does that word mean? The "Christ" seems obvious enough, I mean we are celebrating Christ's birthday. Does "mas" mean birth? No, the word is actually two words squashed together and means "Christ's Mass".  Of course, most of we Christians associate the word Mass with the Roman Catholic Church, but then where does that come from? Does Mass simply mean a large crowd coming together for worship? No, Mass is the English equivalent of the Latin, "Ite missa est", which means, "you are dismissed." This predates the Roman Catholic Church and goes back to the early celebrations of the Lord's Supper, or Communion. Communion in those days became known as the, "Dismissal". There are two theories of the origin of this name for Communion and most likely it is combination of both for both make sense. One is that before Communion was taken, those who were not members of the group were dismissed. The other is at the end of the Communion the leader would say, "Ite missa est". Thus the word Mass actually refers to  the Lord's Supper or Communion.
The interesting thing is this ties the word Christmas when we celebrate the birth of Christ with the practice Christ instituted as remembrance of His death and resurrection.  Without that death and resurrection there would be no reason to celebrate the birth.
Of course, this birth wasn't always celebrated. To do so was once considered irreverent for such celebrations were done for Pagan Gods.  Before 273 when December 25 was settled upon, there were a number of speculations on the date. One theory put it as March 21 because it was believed that was the date when God created the Sun. I imagine the actual date varied because it was accepted the Sun had been created on the fourth day, which was Wednesday and I imagine then Christ had to be born on a Wednesday. Well, maybe, after all Christ has been called "the Man of Sorrows" and "Wednesday's Child is full of woe". But nobody really knows the actual date.
So why December 25? Well, Constantine kind of made it the official date when he gave Christianity most favored religion status and created the Holy Roman Empire in 336, but the date had become traditional as far back as 273. It was chosen as an easy transition for Pagan converts who already had big celebrations on that date. December 25 was natalis solis invicti. You can almost figure that out. Nativity or birth of the solis (sun) invicti (victorious or something similar). It actually translates as "birth of the unconquered sun". Okay, because we Christians are celebrating the birth of the real unconquered Son.
Another celebration that was popular with the Roman Soldiers also occurred on that date. This was the birthday of an Iranian god, Mithras, Sun of Righteousness".  Lot of worship of the sun in those days. people also had big festivals to the winter solstice around the same time of year. (You might view this as a predecessor to the modern religion of Global Warming.)  At any rate, we took a lot of the trappings of this holiday from ancient Pagan celebrations: "gift-giving and merrymaking from Roman Saturnalia; greenery, lights, and charity from the Roman New Year; Yule logs and various foods from Teutonic feasts" (sources: www.orlutheran.com, www.christianitytoday.com, www.scrollpublishing.com, Wikipedia).


Personally, I feel December 25 would have been closer to the conception than the birth of Jesus. Why? The major events surrounding Jesus generally correspond to the Jewish holidays. His death was at Passover, the Holy Spirit came on Pentecost, etc. I believe His birth may have corresponded to one of the fall feasts, Yon Kippur perhaps. We also know shepherds were in the fields around Bethlehem at the time and that would be odd for December, but not in September. By October, however, shepherds would be bringing their sheep out of the fields into more protective environs before winter set in.
Jesus was six months younger than his cousin, John the Baptist. I believe there is good reason to think John was born around Passover, "the Elijah who is expected each Passover".  If Passover fell in March of that year, then Jesus would have been born in September. Counting back nine months would have put the conception in December.
Anyway, Here are some things you need to know if you read my next twelve posts:

This is more than just the Scripture text of Christ's birth. The four Gospels are harmonized as a narrative with a number an annotations to explain the time and the stories behind the story. Passages in the narrative are color coded on this manner:
OLD TESTAMENT, MATTHEW, MARK, LUKE and JOHN
The words of Christ are in Red.
Text in BLACK is non-scriptural interjections or alternate translation.
The Scriptural texts used come from the New International Version.
Some redundancy has been edited out of the narrative.
About the color-coding: there has been a traditional assignment of colors to represent key aspects of Scripture. Blue represents prophecy, brown represents temporal blessings, red represents salvation and green represents the Holy Spirit.
The four Gospels also address four aspects of Jesus Christ in their thematic approach to His life.  Matthew is His Kingship, Mark is He as Servant, Luke is He as Savior and John addresses His Deity.
I have tried to match the colors to the Gospel and attribute. However, I chose to use orange for Luke (Savior and salvation) in order to reserve red for the Words of Christ.
I use Blue for the Old Testament quotes because, in most cases where they apply to the Gospels, they are prophetic.
I hope you will enjoy this and find it informational. It will begin tomorrow with the pre-incarnate Christ and some background on the changes in the 400 years between the Old and New Testaments.
Meanwhile, I wish all my readers a very Merry Christmas and God's blessings in the New Year.


Your servant for Christ, Larry

Illustration: "Angels Announcing the Birth of Christ to the Shepherds" by Govert Teunisz Flinck, 1639
Posted by nitewrit at 11:59 PM