I Guess Some Things Change 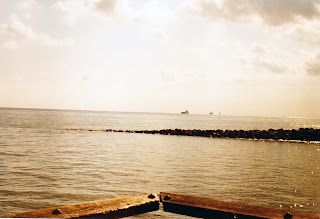 The Old Goat's been cleaning out the clutter of years lately. Buried in a box of forgotten and useless papers was an AAA Triptik. It was from the second year of his marriage when The Kid and his fairly new bride went on a vacation through Virginia. Amazingly, The Kid had made notes on the journey.

They started out early in the morning of August 11, heading south from Pennsylvania down through Delaware. The first day was just to get down into Virginia via the Chesapeake Bay Bridge-Tunnel. (The photo to the left was taken from the bridge.) They stopped and stayed at the Admiralty Motel-Hotel in Norfolk that first night. It was a fairly upscale motel and the room fee was $12.00. 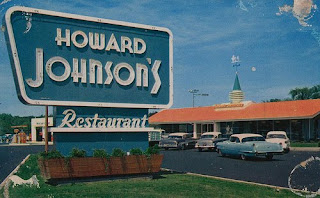 On the way down the had lunch at the Dover, Delaware Howard Johnson's.  Back in those days you didn't have to travel far to see a Ho-Jo's along the road. They use to be the exclusive rest stop along the miles of the Pennsylvania Turnpike and there was one not far from where The Kid grew up that he had visited often in his youth. They're all gone now, of course.

The Kid had the Hot Turkey Sandwich and Mrs. Kid got the Tuna-Egg Salad Bowl. That lunch came to $3.70 including the tip. Cost the Kid more in tolls that day, which were $4.65. 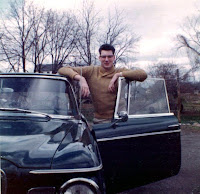 They had a 1961 Studebaker Lark in those days. The Kid had bought the car just before they wed. The Kid also had dark hair; heck, The Kid had hair period, back in the 'sixties.

They ate dinner in the Admiralty Mayfair Room. Mrs. Kid had the Shish-kabob and a strawberry parfait. The Kid gobbled down more turkey, this time the full Roast Turkey Dinner topped off with a chocolate parfait. Parfaits were a pretty popular and common menu item at the time. Total dining bill, including tip, was pretty high, $8.50.

In the morning it was off to Williamsburg.
Posted by nitewrit at 9:21 AM

Email ThisBlogThis!Share to TwitterShare to FacebookShare to Pinterest
Labels: BITS