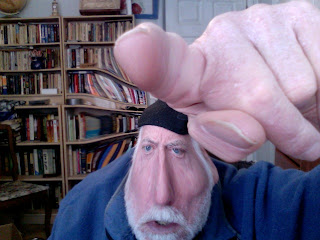 That big-nosed (for sticking it where it isn't wanted, I guess) man on the left waving an accusatory finger is a narrow-minded, superstitious, uneducated, anti-science boob who can't think for himself believer in fairy tales.

At least that is the way my portrait was painted in a rather aggressive email I receive some six months ago.

I don't think all those things are true. Surely my nose isn't that big!

The biggest surprise about this email was it came out of a clear blue cyber sky from someone I don't know and never heard of and it told me to rethink my request to be her Facebook Friend.

I beg your pardon? I had never heard tell of this personage. What am I doing? Am I making Friend requests in my sleep?

The person began by stating, "I am an Atheist," which is a fairly empathic declaration of faith. Yes, faith, it takes faith to be an Atheist, too.

Okay, fine, and I am a Christian.

We are both human beings.

As a human being you are allowed to choose to be an Atheist if that is what you believe. I'm going to recognize we will have a somewhat different worldview, not see everything quite the same way, but we still have a lot of humanity in common to build a casual relationship upon do we not? We share the same world and struggles within it. And being a Christian doesn't necessarily make me better or worse than anyone else, although that email certainly painted me to be dumber than the average bear.

Ah, but there's the rub. I might say something about God and Christ and love and creatures (can't say creatures since that implies a creator) and all that...uh...fairy tale stuff.

Now granted, since you are an admitted Atheist and I am an admitted Christian, I will have some concerns about your future beyond this world that you won't have. I might even go into my room and pray for you, but...shhh...whispering here...it isn't because I hate you. Please forgive me for doing that. Just as you as an Atheist believes all that is unnecessary, I as a Christian believe it is.


My friendships have never been built on the labels the world, nature or an individual has pinned upon their sleeve. My list of friends includes blacks and whites and browns and yellows. (I never actually had a red friend, although you might count my wife as pinkish, that is, she is one-quarter Creek.) My friends are male and female, heterosexual and homosexual, skinny and fat, tall and short, Christian and non-Christian, Jew and gentile and Arab, too. I have God-fearing friends and "Maybe-there-is-a-God-I-just-don't-know" friends, and friends who believe in nothing. I have Democrat and Republican, Progressive (whatever happened to Liberals, because I was sure I used to have more Liberal friends than anything and now nobody says they're Liberals), Conservative and downright confused about-it-all friends. I have even been on good speaking terms with a couple of Communists. I'm an equal-opportunity friendly guy.

It has been this way all my life. I've judged my friends for "the content of their character" long before Martin Luther King used that phrase in his most famous speech.

Uh, did I just use a bad word, "Judged". Oh dear, sorry, I forgot, "Judge not, lest so you be judged." Somebody said something like that. It wasn't King. Now , who was it? Let me think about it.

While we do that, here is the core of the email sent to me.

"I have little patience with people that feel they have to "share" with me, I've been there, done that. Science always wins. I am well educated in world religions and have no need to follow it up with superstition or fairy tales. With that said, I do agree with the old saying, "to each his own", but that doesn't mean I want them (bible thumpers) "sharing" with me on my page ....Understand?
"I prefer people who can think for themselves."


If you really think about it, this is a very insulting letter to send to any Christian, especially one who doesn't even know you.


So, how do I respond to this email? Let me start by saying I think this person is...


See this becomes a reverse Catch-22, doesn't it? If I criticize some bad behavior, this gets thrown at me by those who don't believe in Jesus in the first place. They get to stand in judgment of me, but I am restricted from making any judgment about them. It ends up being used to excuse any kind of excessive behavior one wishes to engage in then.


Well, isn't that illogical? If I am walking down the street and a purse snatcher jumps from an alley to grab an old lady's pocketbook, I am to just go on my way. She struggles to hold on and he takes out a knife and begins to stab her, and I am not allowed to judge this person.


Now just a minute, that is an extreme example. Yes, but it makes it no less valid. It says, "Judge not, that ye be not judged," not Judge only in cases of blatant extreme violence of one person against another, right?


I think if we extend the passage fully I might even be justified to some extend if I began judging this email writer in harsher tones than she without provocation judged me. I won't, but Matthew 7:1-2 (KJV) is saying that is what she should expect to happen.

You see, if you go around superficially judging others without careful examination you must expect they will do the same to you. I judge you, then you judge me. Then what do we have? Just a lot of who shot John going on. We have anger and further misinterpretations and no one wins.


I was judged and found wanting without this person ever getting to know me simply because she has preconceived ideas of what a Christian is. Sad to say many times we Christians do the same thing. We judge first and quickly condemn and confront. From a comment later in her email she may have experienced just that at times in her life, been judged by Christians without a true trial, and now she is measuring it back on me. We can judge bad behavior; otherwise, how to we know not to engage in bad behavior? But how do we ever know a person's needs if we hit them over the head with the guilty stick before we even say hello? How do we ever do what we were commissioned to do if we have condemned our neighbor already?


It is so easy to jump to conclusions, isn't it? We know who isn't going to Heaven, right? We have out list of wrongdoers:  the sexually immoral, idolaters, adulterers, sodomizers, thieves, the greedy, drunkards, slanderers and swindlers. Well, before we are quick to judge, remember to whom Paul said that and what came at the end of the passage in 1 Corinthians 6:   "And that is what some of you were." Yes, and so were some of us.


You don't begin the relationship with judgment, you begin it with love of your neighbor and an Atheist or whatever is your neighbor. You be the good Samaritan; God will be the judge.


And I still say my nose isn't that big. 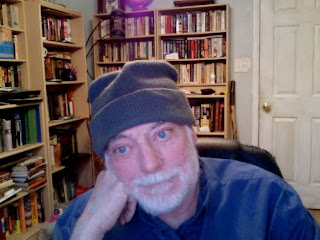 Email ThisBlogThis!Share to TwitterShare to FacebookShare to Pinterest
Labels: A BOOK: Work in Progress 2011, hypocrisy, Tolerance