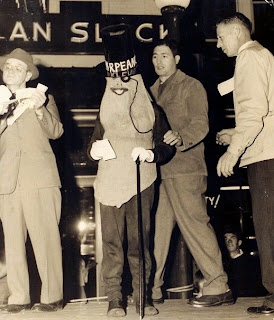 I was thinking about fig trees again. This is probably because I am a nut. Now I know that figs are not nuts, but now a days we Christians are considered by the world to be nuts, at least, if we really mean it. It wasn't always so. When the picture of me as Mr. Peanut was taken, saying you were a Christian was perfectly acceptable.  (The photo was taken in 1951, I was ten years old and just won a costume prize in a Halloween Parade. My grandmother had made the suit out of long underwear and a potato sack.)

I also know that peanuts are not nuts, but legumes. But that is beside the point. Frankly, I am not certain why being called a nut is an insult. Nuts are very nutritious and healthy. They are also something which grows and brings about new life. Isn't this part of the commission of being a Christian?

Anyway, I want to talk about Fig Trees and the End Times, and I know when we dare venture into this whole arena of Christ's Second Coming, we get branded as double nutty. Well, I'm not a date setter or any of that stuff, but I am somebody who believes that the Apocalypse is getting closer and it has something to do with a fig tree. So the first thing I want to discuss here is (wait for it) fig trees.

Let me present a harmonized version of Jesus with the cursed fig tree:

The next day early in the morning as they were leaving Bethany, as Jesus was on his way back to the city, he was hungry.  Seeing in the distance a fig tree by the road in leaf he went up to it to find out if it had any fruit, but when he reached it, he found nothing on it except leaves, because it was not the season for figs. Then he said to it the tree, “May you never bear fruit again! May no one ever eat fruit from you again.” And his disciples heard him say it.
Immediately the tree withered.
When the disciples saw this, they were amazed. “How did the fig tree wither so quickly?” they asked.
Jesus replied, “Truly I tell you, if you have faith and do not doubt, not only can you do what was done to the fig tree, but also you can say to this mountain, ‘Go, throw yourself into the sea,’ and it will be done. If you believe, you will receive whatever you ask for in prayer.”
Matthew 21:18-22 and Mark 11:12-14 Luke 21:29-31
(Now if you want a detailed look at this instance, then you can go to my series called, "Russelling the Fig Tree" consisting of several posts about it beginning with this one, Cliches and Round Abouts. )

I believe the fig tree here was a sign and a substitute for Israel and Judaism. When did this occur? After Jesus had entered Jerusalem to the cheering crowds waving fronds and calling him king, what we Christians call Palm Sunday. These people had blossomed along the road like leaves on the fig tree and it would seem there was the promise then of fruit, of the acceptance of their Messiah.

Yet, here was Jesus along with his Apostles kind of hiding out in Bethany after that event, not being welcomed into the Temple in Jerusalem by the leaders of the faith at all. He was keeping away because there were plots to have him killed. Instead of it being time for the bearing of the fruit of his ministry, it was time for him to die for mankind. He was coming down from Bethany for that purpose, for the Passion Week.

What happened to the fig tree with its leaves, but no figs? It withered and no one would eat its fruit again. This is exactly what happened to Israel after the rejection of The Christ. They withered and their people were carried away and dispersed across the world, the nation was no more and their Temple was torn down. Their religion could no longer be practiced as the Law of Moses demanded. It appeared they were done as a people.

But in that very week, Jesus spoke to his disciples about a fig tree as a sign of his Second Coming.

“He told them this parable: “Look at the fig tree and all the trees when they sprout leaves. Now learn this lesson from the fig tree: you can see for yourselves and you know as soon as its twigs get tender and its leaves come out that summer is near. Even so, when you see all these things happening, you know that it, the kingdom of God, is near, right at the door.”
Matthew 24:32-33, Mark 13:28-29

The fig tree of Israel sprouting leaves again. How could that be? Israel was gone, its inhabitants gone. But again, Scripture had predicted Israel would arise from dry bones as a nation again, because God had made promises to Abraham and his descendants and Israel must exists for these to be fulfilled, which is why there have been so many attempts by the world to destroy israel. Yet in 1948 there it was again and today it stands where it stood and its people are back. But what does this mean? It means summer is near when the fruit will appear. It means Jesus is at the door.

But many other things were to happen when this fig tree appears and it will find itself encompassed about by all of the world, against it, ready to rip it out by its roots and cast it on a fire. And then we will soon see Jesus return.

I suggest we watch the end of this month, specifically September 28 through the 30th.  No, I am not predicting dates for anything, just saying we should take note of these days in light of the world turning against Israel, a dangerous thing to do. On September 28 an United Nation vote looms on the status of Palestinian Statehood. Which ever way this vote goes, I think it will result in wrath against Israel. 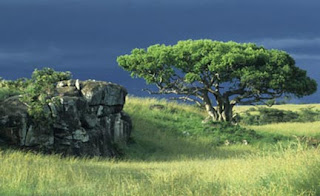 September 29 is Rosh HaShanah, the Jewish New Year, the time it is thought the Hebrews were freed as slaves in Egypt and also the time in is believed that God created the world. Certainly a date for new beginnings. It also is believed according to Jewish tradition that it marks the time when God decides who will live and who will die.

It may be interesting to see how this month plays out for the fig tree.
Posted by nitewrit at 8:26 PM