Getting Here Part IX: Atheism Has No Holy Days 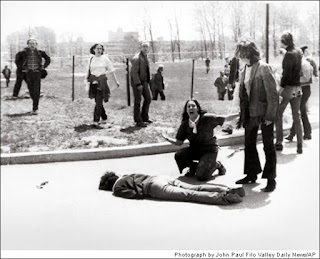 There are those who call the 'Sixties the Decade of Love and Peace. But exactly when was that? It really wasn't the 'Sixties, not 1960 through 1969 anyway. Do you mark the beginning when the Beatles arrived in 1964? Or did it begin in 1967 at Haight-Ashbury during the Summer of Love? Psychedelic Art became popular in 1966 along with the Nehru Jacket, was that the beginning? The Hippie-look was everywhere by 1968, but many would count Woodstock as the apogee, not the beginning. If someone asked me to put borders on that period I would say it was from November 22, 1963 to April 30, 1975, the assassination of President Kennedy to the fall of Saigon.

Odd choice some may say, but those events pretty much framed the period because what was so peaceful and loving during that decade?

There were fiery riots in cities across the nation. There were dogs let loose on people who just wanted to sit down at a lunch counter. Medgar Evers, Malcolm X, Martin Luther King Jr and Robert F. Kennedy were all gunned down. The Vietnam War raged through all those years, with the disgrace of My Lai and the chaos at the retreat in Saigon that brought that undeclared war to a disgraceful end. If people wore flowers in their hair in San Francisco for the summer of love in 1966 you had the summer of madness in the Hollywood Hills in 1969 with the Manson murders. If Woodstock symbolized love and peace, then it all fell apart at Altamont in December 1969. Truth is since the fall of man in the Garden of Eden there has never been a decade of love and peace.

Maybe the truth of this occurred on May 4, 1970 when four college students lay dead at Kent State University (picture above). 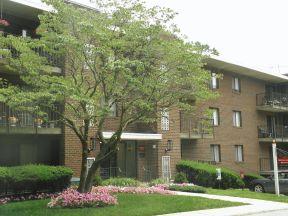 My own life seemed to reflect that period. 1970 was probably my most successful year as far as my writings being published. My byline was appearing in several different publications, even on the covers and two of my poems had been selected for an anthology of American poetry that year. But as the new year began I was beginning a job at a fourth company since May 1969. By summer we left the roach-infested apartment in Philadelphia and moved to a "luxury" apartment in Aldan, Pa. I don't know if they defined the place that way, but they were luxurious to us after where we had lived.

They were good enough that Joe Watson (pictured left) one of the stars of the Philadelphia Flyers lived there. My wife sometimes met his in the laundry room. She taught that young lady how to operate the machines. The laundry room was sort of the social gathering place for the housewives in that place and my wife made friends with another lady living on our floor. We were soon invited to their apartment for a dinner and we became very close friends with this couple over the next five years.

But not all was so great for us. Since Lois had lost that first baby in 1963 she had suffered two more. Both had happened around the fourth month, so were classified as miscarriages. Now in 1970 she was preggers again. She got through the fourth month this time, but as the fifth month progressed it happened, she said she felt she was going to lose it. 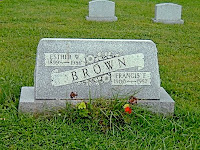 I took her to Fitzgerald-Mercy Hospital. Ironically several years hence I would be working at that hospital, but then it was just the closest. The baby was born, but not strong enough to survive. This was bad enough, but Fitzgerald-Mercy was a Catholic Hospital run by a group of nuns. Because of this the baby was baptized and given last rites. They all told my wife we had to name the child and arrange a funeral. We named him Michael, contacted a funeral director in West Chester and buried the baby in its small casket atop my paternal grandfather's grave in The Grove.

This hit my wife very hard. I wanted her to stop trying to have a child. We were 29 years old and had now lost four babies. It was hopeless, even the doctors were saying so. We were not going to have children. So, what was the purpose of life? I didn't believe in any God or Heaven or Devil either. It was all an accident of time and space, a meaningless chance encounter of some mysterious cosmic chemical. All this meant was you were born, lived several years and died. That was all there was. I might have been changing jobs a lot, but I worked hard when I had them and for what? There was only one reason, to have the money to enjoy this short life we people lived. I decided the purpose of life was pleasure. You know the old motto, "If it feels good, do it." Well, we were going to do it while we were young enough to enjoy it and we would worry about old age when we were older, like after 40.

And so we went for pleasure. We were still good people, we certainly though so. We weren't hurting anyone. My mother wasn't too pleased with our lifestyle, but we were adults and she had no say in our life. Then one day I received a letter from the minister of my parent's church. He said a lady in the congregation had come to him and said my mother was unhappy with how I lived and thought he should try to talk to me.

I hit the ceiling. How dare this lady butt into family business and how dare he criticize. Churches were full of fools and hypocrites. I called him and asked to meet and this began my Atheism activism. Now I began having debates with ministers right in their churches. I wrote letters, often full of blasphemous language. Worse yet, I felt I was winning these debates. When one minister told me it didn't really matter what the members of his congregation believed it was an "ah ha" moment to me. What was he doing preaching anything to them, then, if it didn't matter?

Meanwhile we were getting together regularly with the couple down the hall, the lady my wife met in the laundry room and her husband. He was ten years older than the rest of us and had a somewhat shady background, at least according to him. He had been some kind of mercenary in Vietnam, talked about having killed one or two people somewhere in the past. I don't really think he was making things up. He also had at that time 72 tattoos, and this was long before tattooing became an in-thing.

We went back and forth between our apartments often. Evenings were similar. We played cards and swapped stories, often x-rated and drank. We drank a lot. For some reason alcohol had little effect on me. I could drink anyone under the table, but I'd still be walking a straight line, not slurring my speech and totally conscious and in control. I don't know why, it just was. I never forgot the night before and I never experienced a hangover. It drove my friend nuts. Most of our evenings ended when I either helped guide him back to his apartment or picked him up from where he passed out and carried him to his bedroom.

The four of us went out together. On one occasion in southwest Philadelphia I had to drag him into the car and escape before the police came when he insisted on getting into a game of street hockey with a bunch of kids. He had once played semi-pro hockey. A mother called the police. There were other times I pulled him out of bars before the fights started.

My old gang of friends had disappeared by this time. My closest friend, Joe, was in Vietnam. The rest disappeared as I changed jobs and addresses. So this couple was our social circle now. There wasn't much artistic talk. This was just party time and drinking.

I'm trying to be discreet about my life in this period. There was a Jekyll and Hyde aspect to my life. Family and old friends didn't see this part of it. I was considered as nice, a hard worker, a decent fellow, which I honestly saw myself being as well. The drinking and the sex was private and hurt no one. And as far as I was concern my campaign against religion was a beneficial endeavor. I was exposing this sham called religion. 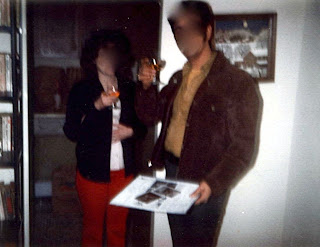 The couple we befriended at the apartment house weren't our only friends in this period. There was another couple as well. We met them in a lingerie shop. There was drinking involved on these get-togethers, too, but that wasn't the focus. This relationship revolved totally around sex. I don't want to go into details here. I do want to emphasize this was not a wife-swapping situation. I have never had sex with anyone other than my wife in my life. This was games, this was picture-taking, this was spending the night in the same room and having breakfast in the nude. In other words, this was not a healthy friendship.

The road I had taken as the 1970s began and we neared thirty years of age, was drought with sin and danger. If it had continued I do not know where I would be today. Like the pornography it would only grow worse in order to get the same thrill. It is also true my attitude toward the world was not very positive either. Underneath the constant partying was a feeling of worthlessness. My wife was also having more and more bouts of depression.

But something must have changed the direction of my life or I wouldn't be writing this now, right? Something did and it came out of one more great loss.

Email ThisBlogThis!Share to TwitterShare to FacebookShare to Pinterest
Labels: BITS, Concepts of good and bad, sex, sin, Written in Delaware 2013