Flocked Together Feeding...: Part 1 of a Testimony and a Challenge 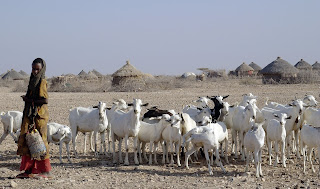 I am an older man with ALS. What of my age doesn't slow me down, the disease does. Physically I am somewhat limited and will grow worse. This may seem the time to kick back and rest on the sidelines, but truth be told, I'm in a race and this is part of what I can still do. I can tell my story and stories of Jesus and challenge you to stay in the race. If you haven't yet, don't hesitate to strap on your running shoes and join in, for the hour is getting late, I believe.  This then is part one of three about sheep and goats.

(On the left, Goats in Ethiopia, 2006)
"When the Son of Man comes in his glory, and all the angels with him, he will sit on his throne in heavenly glory. All the nations will be gathered before him, and he will separate the people one from another as a shepherd separates the sheep from the goats. He will put the sheep on his right and the goats on his left. Then the King will say to those on his right, 'Come, you who are blessed by my Father; take your inheritance, the kingdom prepared for you since the creation of the world. For I was hungry and you gave me something to eat, I was thirsty and you gave me something to drink, I was a stranger and you invited me in, I needed clothes and you clothed me, I was sick and you looked after me, I was in prison and you came to visit me.'
"Then the righteous will answer him, 'Lord, when did we see you hungry and feed you, or thirsty and give you something to drink? When did we see you a stranger and invite you in, or needing clothes and clothe you? When did we see you sick or in prison and go to visit you?'

"The King will reply, 'I tell you the truth, whatever you did for one of the least of these brothers of mine, you did for me.' Matthew 5:31-40

(My daughter doing for the least of these in Kenya, 2006)

Jesus was the "Good Shepherd".  He knew the difference between sheep and goats, but many people outside of farmers don't. Driving through the countryside and seeing these animals, often mingled together, Urbanites might lump them together as one and the same. They have some similarities, but in fact are two distinct species. Both can be beneficial. Goats provide food and milk and sheep provide food and clothing.
A common expression is "they are just a herd of sheep".  People say this derisively meaning people who blindly follow something with no mind of their own. Jesus often referred to His followers as sheep. Does this mean we Christians are a mindless flock?
Researchers at Babraham Institute in Cambridge have done testing on these animals. They found sheep to be very intelligent. Sheep, like humans, can recognize each other individually. "Sheep have highly developed social awareness and interactions." They can become agitated when separated from the flock, with good reason. The reason the sheep will follow their leader anywhere is protection from the predators waiting to devour them (much like Satan, that hungry lion, wishing to devour the Christian). The predators of the world will hone in on the individual sheep that strays from the flock.
The goat has some different characteristics. The goat is "very curious, intelligent, extroverted, flamboyant, and playful". The play of young kids develops their ability to escape predators, abilities to dodge, duck, leap, run and whirl. They don't think they need a leader or the flock, they can do it all on their own.
Goats have a characteristic that gives us another saying: "butting heads". If sheep will follow a trusted leader for their own protection, goats will compete for leadership by butting heads. They do this to establish dominance and the hierarchy of the herd. They get very aggressive during mating season. They may follow a dominate ram, but their individual will is to be that ram. A good shepherd will separate his sheep and goats during these aggressive times so the goats don't harm the sheep.
There is another interesting difference between sheep and goats, their eating choices. It is often said a goat will eat anything. This is a myth, still goats aren't overly selective either.  Sheep are grazers and picky. According to North Carolina State University studies ("Production and Utilization of Pastures and Forages" - Technical Bulletin 305  North Carolina Agricultural Research Service, North Carolina State University, Raleigh, NC. 1998) sheep "are selective grazers, choosing plant parts which are of higher quality (and more digestible)."
Goats are browsers. Remember goats are very curious. "Because of their inquisitive nature and tolerance of 'bitter' or high tannin material goats may eat unpalatable weeds and wild shrubs that may be poisonous, such as cherry or milkweed." (N.C. State University, Ibid.)
So how do we apply this to the passage in Matthew about the separating of the sheep and goats, and why? Well, sheep and goats are often flocked together, like members of the church. They may look and behave similarly at times, but the sheep will be obedient to the leader, because this will protect them. The goat will try to usurp the leader if possible, or at least challenge and butt heads with each other. The goat will not choose the best food for its growth, (the Word of God), but will seek worldly ideas out of curiosity and devour them even when they are poisonous. The goat and the sheep may seem contented in the same pasture, but the goat will be eyeing the temptations elsewhere rather than keeping its eyes on the true leader.
And like the Urbanite driving through the countryside, we can't always tell the one from the other.