Rambling on About Spiders and Moths

In "Design", Robert Frost asked what brought the spider to that height, what brought the moth; Predestination or chance? We also must ask what brought the man to the edge of the cliff in the last post. Spiders spin where spiders spin and moths fly where moth's fly, but people wander where they wish. Spider's may be predestined to spin webs to catch food and moth's may chance to be caught in sticky strands, but humans act with free will.

When I go on a walk, I choose from many venues. There are factors that play into my choice, yet often it is because I enjoy variety. Chance seldom, if ever plays a part in where I walk, unless you say when I was in Washington DC I walked around the mall and when I was in New York I walked up Broadway. If I walked well-worn routes in strange cities it was because I was in a strange city to me, not by chance. There were reasons I was in that city.

I do not see predestination in where I walk near where I live. Most of those walks are uneventful, just a bit of exercise enjoying the peace of my surroundings. Sometimes something does happen and it is significant that I happen to be there when it happened. In some such cases, I believe God did direct my feet in that direction.

God is not easily understood and even harder to explain. For instance, Matthew 11:29-30 quotes Jesus saying, "take my yoke upon you and learn from me, for I am gentle and humble in heart, and you will find rest for your souls. For my yoke is easy and my burden is light." Yet just a 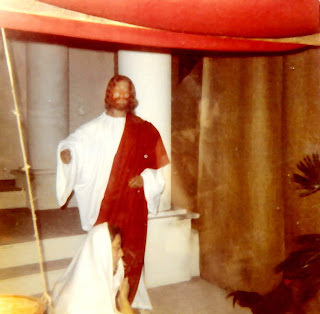 few verses earlier in Matthew 10:38 Christ states, "and anyone who does not take his cross and follow me is not worthy of me". This seems contradictory.

When one thinks of bearing their cross, they have to envision Christ bearing his cross up Golgotha, beaten and bloody, going to his death in torture. If we are yoked to Christ in this, how can it be easy and light? Because the cross is for the flesh and the yoke is for the soul, and understanding the concept and knowing the experience does not make it easy to illustrate in words.

Frankly, we all bear our crosses. If we are alone, disconnected to God, these crosses will weigh greatly upon us. If we carry our crosses yoked to the Lord that weight will be distributed and easily carried and we will know at the top of our hill we will find rest. See, very, very difficult to convey this.

But what disconnects us from God and adds so much weight to our crosses? Sin. When we yoke to Christ he lifts away our sin and our burden is lightened and we are connected to God.

No. Christ offers his yoke and says "take my yoke". It rests upon us gently and lightly, unlocked. We have the free will to step from under that yoke. We are not prisoners in a chain gang, forced to obey God's will. We who have put on the yoke with Christ want to obey God's will. But sometimes we slip away and then we add weight to our crosses until we ask to come back under the yoke. Again, hard to make clear with our limitations of language.

One thing that should be clear, however, is how strong our own will can be and that alone should prove against predestination ruling every aspect of our being. If this were not so, then God would have been guilty of the sin when Eve and Adam ate the forbidden fruit, for it would have been predestined to happen. They would have been helpless to resist. I believe man and woman were created perfect, but to be perfect there must be ability to choose. Eve and Adam choose to give into temptation and made themselves imperfect, and their imperfection has been passed down to us all.

Jesus Christ was as much human as he was God, that is, he was all human and he was all Divine. Again, another of those things difficult for us to fully understand. He was born of human egg, but not of human seed. He did not carry Adam's sin in his birth. Still that didn't protect him from human frailty. He was prone to all the hurts and pain of any other human, including all the emotions we feel. Look at his life and you see him tired, you see him joyful, you hear him weep, you watch the fury of his anger, you see the anguish in his prayers just before his arrest. You also see him tempted, but unlike Eve and Adam, he doesn't succumb to the tempting. He resists, he stays in obedience to God the Father and he remains perfect.

But you see in these things that he faced that choice, as do we. Only there have been times I have missed perfection. There have been times when I have stepped over the cliff and clung to some convenient root hoping it would hold me. Fortunately, I believed the voice above that told me to let go and He would save me, and I let go of the roots.

The photograph of Jesus was taken by Nitewrit at the Nashville Country Music Wax Museum in 1975.
Posted by nitewrit at 11:30 PM

Email ThisBlogThis!Share to TwitterShare to FacebookShare to Pinterest
Labels: BITS, Concepts of good and bad, faith, sin, Written 2008 in Delaware