Avoid the If Bridge 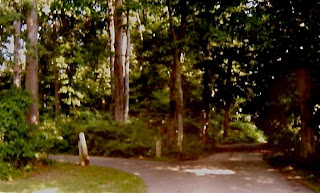 Often I hear people say,  "if only I had done this or that I'd be better off today". I call this taking the if bridge. It's a shaky bridge at best.
A man is traveling to a town. The trail takes him through a forest.  It has been smooth going, but in the middle of the woods he comes to a fork in the path. He isn't sure which is the best way. One path is wider, but the other seems to turn more in the direction the town lies, so he takes it.
For a while it is pleasant and smooth going, but then the way becomes a bit rough. He comes to places where fallen trees block the trail and he has to climb over them. Beyond this he must ford a low place filled with muddy water. Sloshing on with wet shoes and stained trousers, he fights his way through a mile of overgrowth, which snags in his clothes and scratches his skin. After a few more obstacles, he arrives at the town. He is battered and bruised, tired and tried, scratched and sore. He looks back and says, "if I had only taken the wider path I'd probably gotten here sooner and in better shape."
Perhaps that is true. But he doesn't really know. Perhaps the other path never came to the town. Perhaps a mile down that path he would have been mauled to death by a bear, or fallen over a cliff or sunk into a pool of quicksand. He only knows one thing if he had went down the other path. It would have been different. Whether it would have been better or worse, he doesn't know.
We make many choices in life. Once made, they are made. We can only guess whether our choice was the best one, because we cannot know what would have been different if we had chosen the other.
Let me give a personal example. After I graduated from high school, I took a temporary job hanging samples of a new cleaner on doorknobs. This giant company was doing field marketing. A team of full time employees came to an area in these panel trucks. They hired local people to fill out their crew, college students on summer break, people like me, a high school grad looking for a job or others looking for any kind of work. We were driven to various sites and given a case the samples to hand out. After a few weeks, once the area had been covered, the local people were let go and the permanent crew moved on to another county or another state.
In the last week of my employment, the boss of the team called me aside. He told me he liked my work ethic and offered me the chance to join the permanent team. This would have meant I would have had a full time job and have the chance to travel all around the country. Maybe I could have worked my way up in this giant company.
But I was only just 18 years old and at that time you were not legally an adult until you were 21. To take this job, I had to have written permission from my parents. My parents didn't think it was a good idea and so I had to turn down the offer.
I don't know what my life would have been  if I had taken it. What could have happened to a young man traveling about the country with a group of other young men, being away from home for weeks, maybe months, at a time, sleeping in motels and being in different towns and cities all the time?
I have no idea. I know some things that probably wouldn't have happened if I had taken that job.  I would have never met the girl I married, never had the children I had and might have become a totally different person.
Think about that next time you look back toward the "If Bridge". You don;t know what you would have found on the other side, but think about what you wouldn't have that you do have. You don't know if things would be better or not. Don't waste your time then even thinking, "if only  I..."
This is my advice for life in general, but it has a spiritual side, too.
Matthew 7:13-14  Enter through the narrow gate. For wide is the gate and broad is the road that leads to destruction, and many enter through it. But small is the gate and narrow the road that leads to life, and only a few find it.
You make choices in life and there are many forks in the road. There is one choice you don't ever want to say, "If only I..." If you think you missed this path, then you go find it again and take it. You may find that path has rough spots, but you need to be on the right path to get to the right destination, not the easy road to nowhere...or worse.
Posted by nitewrit at 6:50 PM

Email ThisBlogThis!Share to TwitterShare to FacebookShare to Pinterest
Labels: A BOOK Weeping a Night Rejoicing the Morning, Beyond Common Statements, Choices, Life, my history, Paths, Written 2008 in Delaware