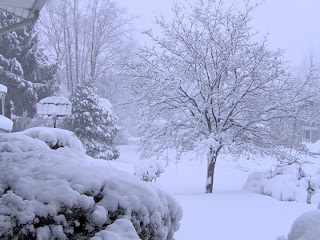 Two people react to a winter morning:
"Ah, it snowed this morning. It began early, the lawn was white when I awoke. I stood at the window and enjoyed the beauty of the landscape. The ground was clean and dazzling white and there was a festive trim of icicles hanging from each trees. Behind me was the comforting crackle of the fireplace blaze. It was wonderful."
"Aw, it snowed this morning. It began early, the roads were already slick when I started out. I could barely see out the windshield and the landscape was only a smooth gray slate that confused my whereabouts. There were patches of ice and a car behind nearly slid into me.  It was terrible."
Would we question the veracity of either speaker? Would we say they were describing two different storms? They could be, but there is no reason to doubt it is the same storm despite how much the descriptions vary.
How it was explained depended on where the viewer was. The first observed it from the side. The other from the middle.
Even if in the middle, a person's description might vary depending on when they tell it and to whom. If the second speaker had been hit by the skidding car an initial news report might say, "A car was found off the road against a tree along Route 40 during this morning's storm. The driver was taken to the hospital complaining of chest pains. The accident is under investigation."
A later report might elaborate. "The accident on route 40 reported on earlier was caused by ice. A vehicle, which left the scene prior to arrival of emergency crews, had skidded and pushed the accident victim off the road into a tree. The driver of that car was taken to the hospital for examination and treatment after complaining of chest pains. It was determined the victim was suffering from bruised ribs. Police are searching for the other driver."
No one would claim the first news report was describing a different event or the differences in the second report invalidated the event. The initial report is a brief summary of an event. The second goes into more detail of how the event came about and the results.
Or the victim, when visited by family, may say, "I was driving to work in the storm when I was hit by another car. I thought I was having a heart attack." Later, retelling the events, the victim may give an account with all the salient details.
In fact, a short burst about an event followed by a more elaborated telling is not at all uncommon in literature, whether fiction or nonfiction. It is a popular devise to catch one's interest. I have beside me Les Standiford's, Meet You in Hell: Andrew Carnegie, Henry Clay Frick, and the Bitter Partnership That Transformed America. Chapter One describes an event of "a late Spring day in 1919"; the next 295 pages elaborate on the how and why of it.
I see no discrepancy in the Bible when this same thing is done. I don't say it was told this way in chapter one and another way in chapter two, it must be a different event or a different person writing. One can be an amplification or a summary of the other.
So God created man in his own image,in the image of God he created him;male and female he created them. Genesis 1:27
This is the account of the heavens and the earth when they were created. When the LORD God made the earth and the heavens-- and no shrub of the field had yet appeared on the earth and no plant of the field had yet sprung up, for the LORD God had not sent rain on the earth and there was no man to work the ground, but streams came up from the earth and watered the whole surface of the ground-- the LORD God formed the man from the dust of the ground and breathed into his nostrils the breath of life, and the man became a living being. Genesis 2:4-7
Or a telling can be given for different purposes or circumstances.

So I made the ark out of acacia wood and chiseled out two stone tablets like the first ones, and I went up on the mountain with the two tablets in my hands.  The LORD wrote on these tablets what he had written before, the Ten Commandments he had proclaimed to you on the mountain, out of the fire, on the day of the assembly. And the LORD gave them to me.  Then I came back down the mountain and put the tablets in the ark I had made, as the LORD commanded me, and they are there now. Deuteronomy 10: 3-5
To claim that this passage means the ark was just a simple wooden box and choose to give that claim more validity by dismissing the descriptions of the Ark of the Covenant in all other passages is cherry picking at its worse (as one author has done, claiming he has found the lost Ark).

The LORD said to Moses, "Tell the Israelites to bring me an offering. You are to receive the offering for me from each man whose heart prompts him to give. These are the offerings you are to receive from them: gold, silver and bronze; blue, purple and scarlet yarn and fine linen; goat hair; ram skins dyed red and hides of sea cows ; acacia wood; olive oil for the light; spices for the anointing oil and for the fragrant incense; and onyx stones and other gems to be mounted on the ephod and breastpiece.
"Then have them make a sanctuary for me, and I will dwell among them. Make this tabernacle and all its furnishings exactly like the pattern I will show you.
"Have them make a chest of acacia wood—two and a half cubits long, a cubit and a half wide, and a cubit and a half high. Overlay it with pure gold, both inside and out, and make a gold molding around it. Cast four gold rings for it and fasten them to its four feet, with two rings on one side and two rings on the other. Exodus 25: 1-9
The Deuteronomy passage is an informal speech in the first person, given by Moses before the people as a summary of all that had happened up to that point. He skims through events quickly, not boring with details. His statement of making a box doesn't mean it was a plain wooden box nor that it was made first.
The Exodus passage is more formal and in the third person. It is a detail accounting of what happened and goes into a full description of the Ark, the tabernacle, the implements of worship and even the clothing of the priests.
Don't ignore the complete Scripture for a phrase. It is like those who claim the Hebrews crossed the Red Sea at a place where the water is only a few inches deep and sometimes even dry because of the winds. They ignore that an army in chariots drowned in those "few inches of water". They never mention the second time this type of miracle occurs when Joshua lead the people across the Jordan.
Posted by nitewrit at 8:05 PM

Email ThisBlogThis!Share to TwitterShare to FacebookShare to Pinterest
Labels: A BOOK Weeping a Night Rejoicing the Morning, Bible, credibility, Written 2008 in Delaware