And The Attacks Scale Upward 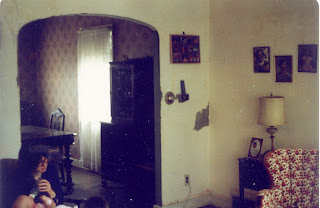 Our new daughter lived through the night. She was behind wired glass, inside a small glass rectangle called an incubator with a thousand tubes running into her. Every couple of hours they stuck a needle in her heel. She had jaundice and had to be under special lighting. my wife and I had opposing RH Blood factors, so the baby had to have a blood transfusion. She had a fever, she had something else, she had that. We could only hold her outside her little box for a brief time each day. The kid looked like a yellow plucked chicken with a tongue too large for her mouth. I said she looked like Alfred Hitchcock. She weighed 3 pounds 6 ounces.
Three weeks later, Noelle came home on New Year's Day 1981 inside a big red Christmas stocking (Picture on the right).
God had blessed us with another miracle. The hospital blessed us with a number of bills. Well, we'd just have to put off owning a house for awhile.
My wife's father had been acting erratically for awhile. (Her mother had died when she was 17.) He was convinced there were people hiding in his bushes at night, that someone might break in to rob him. He had demanded my wife return the house key and he kept a loaded gun under his pillow. He said if anyone tried to break in he would shot first and ask questions later. Needlessly to say when he wasn't answering the phone in May, my wife was concerned. We drove to his house, but no one answered the knock.  My wife went up the street to her uncle, who was her father's best friend, and he called the police. No one wanted to try and break in remembering that gun with which he slept.
He was unconscious. An ambulance took him to the hospital and they took him to surgery. the man had suffered from emphysema for years. He had lesions in his brain, apparently the effect of working with asbestosis in his youth. During surgery he had a heart attack and died, but the doctors brought him back to life.
If you call it life. He was on machines. The doctors told my wife any decision to turn off the machines were hers. They couldn't advise one way or another. I looked into her father's eyes and there was nothing there. Why they brought him back when he died made no sense. I talked with my wife. We prayed. She told them to turn off the machines and when the electricity died, so did he.
She was an only child. All his estate went to her. We had a house of our own, but like the first car I got at 16 when my grandfather died, it came with a mortgage of guilt.
The house was free and clear, but something of a mess. He had kept the outside up nicely, but ignored the inside. It was dingy and dark. junk was piled everywhere, old TV parts, a lifetime of old papers, the power mower and other yard tools stashed in the dining room. We found over $3,000 dollars in envelopes taped to the bottom of bureau drawers. The house was not really fit to move into with a baby and a three year old.
I spent all my free time in this house fixing up, cleaning, hauling away junk and painting. We wanted it ready to move into by the end of July because our lease was up August 1. I was working hard to make it and finally, sometime in July, I brushed on the last dab of paint and it was ready.
I didn't go there the next day, because I had classes that night, but on the day after I took my wife and two kids to see how nice a job I did.

When I put the key in the lock, I thought I heard a strange noise. I threw the door open and I saw the source. Water was running down all the walls. The living room ceiling lay in a heap upon the floor, all the wallpaper had peeled off and all the hardwood floors were buckled.
I dashed down to the basement where the water shut off valve was located. I jumped into water up to my waist, fortunately I wasn't electrocuted. Firemen had to come to pump out the water.
A inflow pipe had burst in the upstairs bathroom. How long it had been flooding the house, I don't know, but our interior ceilings were ruined as were the floors, all the kitchen cabinets and appliances and the furnace.All the wiring and plumbing would have to be replaced. Basically, the house had to be gutted and rebuilt to be livable.
My daughter Laurel huddled shivering on the stairs. For years after she would have nightmares when it rained. The photo at the beginning of this post is my wife feeding Noelle in the ruined living room. You can see the despair on her face.
My father-in-law had insurance, but it would do only limited and basic repairs. We had to decide whether we wanted to stay there or sell the place. We were tired of moving. We decided we were going to stay in this house for a long time and would spend the extra money to built it with higher quality than the insurance would cover. Now I had to get a mortgage to cover the costs of this rebuilding and the remaining bills from Noelle's birth.
But it seemed my wife's three wishes had been granted: I had a job I liked, we had babies of our own and now we had our own home. Maybe we really could settle down for a while.
And then in early 1982 my wife said: "Honey, I think I'm pregnant again."
There was no thinking about it. She was. This time she got to a doctor and he determined so much scar tissue had built up she wouldn't be able to deliver naturally. Once again it was back to bed for the term and in August she had a Cesarean delivery of our last child, a son. he was also born prematurely.

He was the giant of our litter. He came into the world weighing 6 pounds 10 ounces. The hospital placed him next to a baby weighting over 10 pounds. We named him Darryl, not realizing that in the future this would subject us to a never-ending series of "Larry-Darryl-and-Darryl" jokes thanks to Bob Newhart.
Having a third child brought up another decision. The house we had was somewhat small for a family of five. Combining this with my long drive to Delaware everyday, we decided to sell the house after all and move once again, this time to Delaware. We have lived in this Delaware home for over 26 years now. I was employed by that bank for 21 years. Our kids grew up healthy into nice people and Noelle was not blind. Both she and Laurel were Honor Students. My wife and I have been married 47 plus years and I've been a Christian almost 34 of them.
Through it all we have persevered.
And the first thing I did when we moved to Delaware was look for a Bible-Believing church.
Posted by nitewrit at 10:05 PM