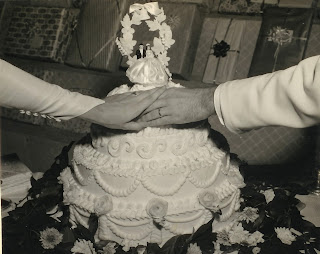 Love will see us through. All we need is love. We can live on love.
Sayings, movies, songs, many things in media tell us we can overcome any obstacle if we are just in love. This is about the love between two people. You got me , babe, and I got you. Love conquers all.
There is a song by that title written by Nanci Griffith and Charley Stelf. The lyrics tell about several couples, a "brown-skin girl" and a white soldier, a "wheel-chair bound" senior citizen marrying a divorced man, people from "far and near", different backgrounds, economic situations and race. The song assures us each time that love conquers all.
So far, no problem really, true and lasting love can overcome many difficulties. Still, it takes work to make a marriage last, as well as love, even where two people are as alike as peas in a pod. I have no doubt that for the couples, so far, in the song love could see them through.
It is the last example that raises the far more important spiritual question, not the physical.
It is of a Muslim girl marrying a Catholic boy. Love will conquer all it tells us again.
Before I began dating the woman who became my wife, I went with several others. The last of these girlfriends and I were very much in love. One day, after we had going steady for several months, she told me we couldn't see each other anymore. Why? She was honoring her mother and father's wish to break it off because they saw we were getting serious. The problem?She was Roman Catholic, I was not.
Harsh? Yes. Unfair? Maybe.            Good idea? Yes.
Do not be yoked together with unbelievers. For what do righteousness and wickedness have in common? Or what fellowship can light have with darkness? 2 Corinthians 6:14
Harsh passage? Yes.  Unfair passage? Maybe by worldly standards.               Good idea? Definitely.
The quote from Corinthians was not specific to marriage, but it applies here as well as to other relationships. But why do I say something seemingly harsh and possibly unfair is good?
Relationships, even between individuals deeply in love with each other, are full of conflicts. For example, one may be an early riser and the other a night owl. One might want to be out on the town at midnight, the other wants to be in bed so to get up with the sun. The other might hit you with the alarm clock if you tried to awake them to see a sunrise. Such a difference calls for compromise if conflict is to be avoided. If one or the other is too insistent on their lifestyle prevailing it can lead to real difficulties in the marriage. Yet this is a difference of no real significance.
There are many such conflicts that must be resolved in a successful marriage. Each gives a little here, gives a bit there and they accommodate each other's particulars. If they can't do this, the marriage will fail.
But if the difference is spiritual belief, how can one give a bit or bend a little to accommodate the other and stay true to their faith?
Oh, you may say, we just won't impose our separate belief on the other. That part of our lives we will keep private to our self. And perhaps you can, perhaps you will, but what do you do when children come?
Let's suppose no children come. Does that Muslim girl go to Mosque and the Catholic boy go to Cathedral and at home never speak of God? Do they argue they are not unequally yoked because they are both believers in God, the same God, the God of Abraham? Yet their view of Christ is quite different. Can they ignore that difference if they are devout to their religions?
To the secular and the nominally religious a difference in faith is no more consequential than the early riser versus the night owl. Asking if love conquers all in this situation is a good test of the depth of your faith. Certainly it is for the Christian.
"For God so loved the world that he gave his one and only Son, that whoever believes in him shall not perish but have eternal life. For God did not send his Son into the world to condemn the world, but to save the world through him. Whoever believes in him is not condemned, but whoever does not believe stands condemned already because he has not believed in the name of God's one and only Son." John 3:16-18
To the Christian there is no salvation and no doorway to God except through Christ. Perhaps you could pretend this doesn't matter in your outward approach to the one you love, but how does a Christian endure the agony of knowing the one they love is condemned? How could one as a Christian keep silent and live in peace when so yoked? Your love for your spouse can not conquer this condemnation. Only the love of God and your spouse's love of God in return can conquer all and without that your yoking together with an unbeliever will be a heavy burden upon your heart.
Posted by nitewrit at 11:56 PM

Email ThisBlogThis!Share to TwitterShare to FacebookShare to Pinterest
Labels: A BOOK Three Ways to Sunday, Beyond Common Statements, Choices, love, Written 2008 in Delaware