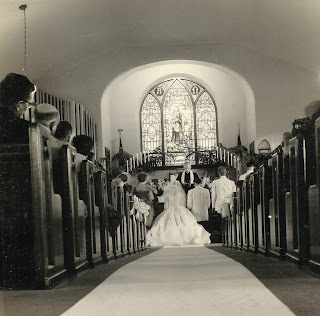 We were in a group a few evenings ago having a discussion about marriage. Some one asked if we were Christian when we wed and I answered, "nominally". Why did I say that? After all, we were wed by a Minister in a Methodist Church before a host of witnesses. A beautiful stained-glass window depicting Christ as the Good Shepard shown before us. The vows were the standard Christian ones.

I have told of my early exposure to the church, where I was sprinkled as a baby in the Grove Methodist Church and later attended Sunday School and Methodist Youth Fellowship in Downingtown.

My wife's family were Lutheran and she had a similar background of attendance, although in her case, her parents were regular church goers, in fact her mother played the organ.

In 1956 my parents bought a home in Bucktown and at the end of ninth grade I moved to the new home. I thought I left church behind at that point, but for some reason when my parents settled into their new home, they also settled into a life of church going, to a Methodist Church in Spring City. Immediately the pressure was on me to go to church again. This time I had no out, not being able to point to their lack of church going as a reason why I shouldn't go either.
I was stuck.
But the next year I turned 16. I got my driver's license and I had a car. I soon struck a bargain. I would go to Sunday School, but not church. This was agreed to. What did I see as beneficial in this? Sunday School was shorter for one thing. It began at 9:00 and ended 45 minutes later to allow for preparations for the church service at 10:00. The service itself, although scheduled for an hour, often ran longer, especially on communion Sunday.

The second benefit was it gave me time alone at home while my parents and Grandmother, who was living with us at this time, attended church. I could use this time perusing the magazines hidden under my mattress. Actually, I never hid anything under my mattress. I had a safer cubby hole for hiding that kind of material. (Is there any need to explain further? I think not.)
The first Sunday of this new arrangement, I had just gotten home to the now empty house and changed from my "good" clothes when someone rapped on the door. I knew it was a stranger, because they came to our front door, which no one used who knew us. When I answered, there were two people there, Jehovah Witnesses, and the only way I could get rid of them was to buy a book. I probably should have taken this as an omen, but instead I just made certain I didn't answer any knocks at that door.
This went on for a while, except I found Sunday School deadly dull. This was probably because it was deadly dull. The man teaching it simply was not suited to teaching teenagers. Soon I worked out a new deal with my folks. Instead of Sunday School or church, I would go to the Sunday evening Methodist Youth Fellowship meetings. There were no trips to Dick Thomas's Brick Oven from this church, but the meetings were still more interesting than Sunday School. Sometimes we even had cookouts and hayrides.
The next year, I was elected President of MYF. I decided to shake things up and changed the structure from what it was to one of open discussion of Bible stories. I played Devil's Advocate, asking questions attacking a lot of the passages we read. I was right back to what I was at Downingtown with my "okay, then where'd God come from" challenges. Everybody took it I was just trying to make them think and the discussions were lively, enough so that our membership grew as new teens heard about what we did and came to the meetings. I was praised for my leadership. I was praised as a shining example of Christian youth.
But I was no Christian other than a nominal one. I didn't ask my questions to spark discussion. I meant them. I asked them to challenge the beliefs of those attending, to shake their faith if I could.
When my wife-to-be and I met, we were barely out of high school. When we married, she was 19 and I was 20. I was not that long out of MYF. My parents were still faithful attendees. There was never a doubt we would be wed in that church. Thus we had a proper Christian wedding 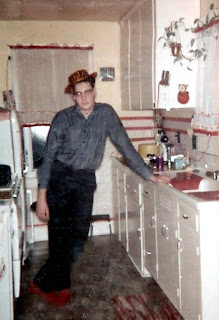 before a long ordained Methodist minister. Yet, I wasn't a Christian, not really. I had never professed any belief in Christ. I thought I was a good guy, but I wasn't a spiritual one.
If I was only a Christian-in-name at my wedding, I was to go a long way down a different road after the honeymoon. I still thought of myself as a "good" guy, and probably in comparison to some, I was, but after a while I even renounced the nominal tag of being a Christian.

Email ThisBlogThis!Share to TwitterShare to FacebookShare to Pinterest
Labels: A BOOK Three Ways to Sunday, Concepts of good and bad, my history, Written 2008 in Delaware