Welcome to the Real World 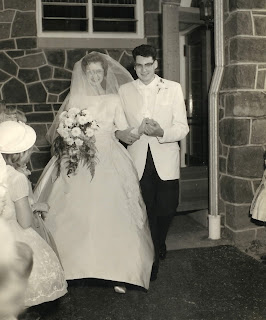 After getting married, I was free of church. My wife and I didn't attend any church. We were riding high and fine without any help from religion. We both worked for the same big oil company and both made what was considered better than average salaries for our age, our position and our time. We bought a four bedroom Cape Cod house even before the wedding. We had a new car. We had Honeymooned throughout New England and Canada and we went to New York and Virginia the next year. We ate out regularly in fairly expensive restaurants. (Keep in mind that you could buy steak dinners for two with drinks for $12 in those years.) We would rather go off to the shore for the weekend than spend anytime in a church. We started off having it too good, so who needed God.

When things went south, we blamed God.
We were fine with two salaries, but when my wife lost her job it was difficult to meet all the monthly bills so the trips and high end restaurants disappeared from our routine. Then my wife became pregnant.
She was two-thirds through term and home alone. I was at work in Philadelphia, a trip I made every week day by train. We lived halfway between each of our parents, a half hour drive to either one. My wife didn't drive then. She felt she was going into labor and called our doctor.
He told her that was impossible. She asked him to come out, but he refused. He told her he would have the drugstore deliver a prescription to her to ease her pains. It was just as the drug arrived that the baby came. She didn't go to the door and the delivery man left. She delivered a boy, who lived briefly and died.
She placed it in a pan in the bathroom and called me. I left work and caught the next train home. When I got there she was in the bedroom. I asked if she had called the doctor again, but she hadn't. I called him and he came to the house. After he had attended to my wife, I asked what we should do with the baby. "You can toss it in the trashcan for all I care," he answered.
Not exactly great bedside manner.
As my wife recovered from this loss, our financial situation continued to worsen. Her father was giving us about $20 a month to help pay the bills. (Again, $20 was a fair amount back then.) Finally, we decided we need sell the house and engaged a realtor who put the House for Sale sign up by the driveway.
During this period a friend of our's visited with her boyfriend, who was a black man. This visit was observed and it was perceived this couple were house-hunters. Soon we received a warning from the Realtor not to sell to any Negroes, not that she (the Realtor) cared, but some people might make trouble. We told the Realtor we'd sell the house to anyone who wanted to buy it. Next we started getting threats that we better not show it to any niggers if we didn't want all our windows smashed out.
I don't know if anyone would have carried out their threats. The house sold soon after the threats to a white couple. Perhaps the Realtor pushed the sale to get rid of us "nigger-lovers".
We didn't make any money on the sale. It was a down market at the time and we sold for slightly less than we bought. We had no escrow built up. We had no savings. We were naive and didn't think we could rent any where and we moved in with my father-in-law. (My wife's mother died while she was in high school.)
This was not a good arrangement. Things reached a point where we separated. She stayed at her fathers and I moved back with my folks. We both began dating others, although no formal separation was filed or any talk of divorce had happened.
I quit my job at the oil refinery and she got a job at the University of Pennsylvania. I was spending my time writing, although I did take a part time job at a chewing gum maker.
After a few months we went back together, but on the condition we leave her father's. We moved 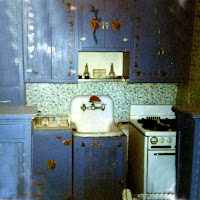 into an apartment in Philadelphia's University City area, a place that had seen better days. It was an interesting place, occupied by college students, drug addicts, prostitutes and radical Black Power groups. The building behind us was a college dorm and all kinds of things were hurled from its windows into the alley behind us. (To the right is a picture of our kitchen there.)
We were living on her wages, which weren't great, and the very few dollars I sometimes got paid for a piece I wrote and sold. Sometimes I would walk along the streets, looking about the trolley stops for dropped change. I usually found a couple dollars each day and that often bought something to eat.
But it was an adventure. We were living the Hippie life. I was actually getting published regularly. In the summer, I got a job with a publisher and we had money now to go to concerts at The Trauma, The Kaleidoscope and the Main Point, even to a Dylan show at Convention Hall. We had the Hippie car, a VW Beetle.
Soon after I got that job my right to vote was challenged and I had to take off from work and go to court. But that is another story. 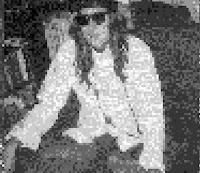 Our experiences from spoiled newlyweds to Hippie activists was complete. We had "soul", but not The Spirit. One of my campaigns, my cause, was to show up the hypocrisy of ministers and I was back to smugly throwing those challenging questions at pastors again.
Oh, I was so smart when in my twenties. I knew everything then and I knew there was no God.
Here is what I didn't know:
"A man's own folly ruins his life,
yet his heart rages against the LORD." Proverbs 19:3
Posted by nitewrit at 11:45 PM

Email ThisBlogThis!Share to TwitterShare to FacebookShare to Pinterest
Labels: A BOOK Three Ways to Sunday, beginnings, Life, my history, sin, Written 2008 in Delaware