Seven: The Number of Completeness 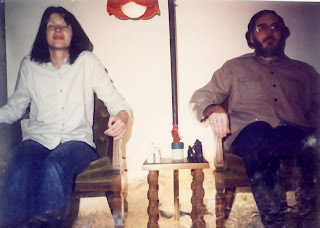 And do this, understanding the present time. The hour has come for you to wake up from your slumber, because our salvation is nearer now than when we first believed. The night is nearly over; the day is almost here. So let us put aside the deeds of darkness and put on the armor of light. Let us behave decently, as in the daytime, not in orgies and drunkenness, not in sexual immorality and debauchery, not in dissension and jealousy. Rather, clothe yourselves with the Lord Jesus Christ, and do not think about how to gratify the desires of the sinful nature. Romans 13:11-14 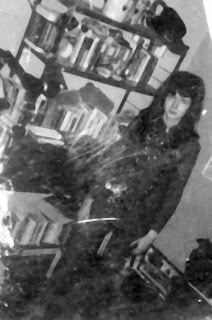 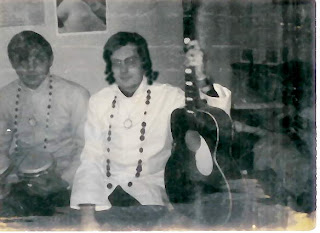 My wife on the left, was to be the vocalist in our band, "Ethereal", music by Jim (with bongos), lyrics by me (holding guitar).
Those weren't costumes, we actually dressed that way.
THE EARLY 1970s
Parties, Sex and Booze 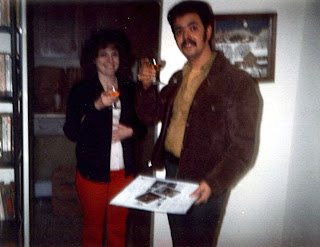 B. and W. in rare photo - fully clothed
This is not the case with the Polaroid photos on the sheet W. holds in his hand. 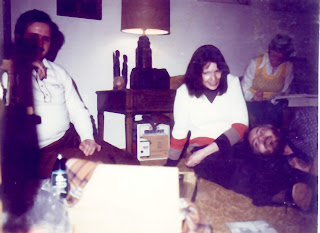 J. (far left) and L. (far right), friends through both periods, part of the Hippie group, a writer and later Vietnam war hero. They named their first child after me.
My wife and I are in the center. The little chest on the table next to my wife held a canister of Scotch and a canister of Wild Turkey Bourbon.
There was a well-stocked bar somewhere in the room, our idea of high sophistication. 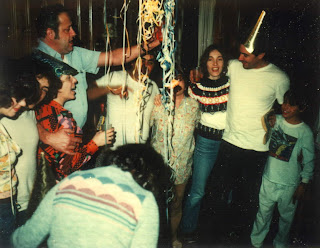 New Years in the Poconos. We and nine other couples use to rent a lodge each Christmas week. This was actually a good time. Despite the toasting, there was little drinking. Mostly we went sledding, ice boating and popped popcorn in the fireplace. Note there were children present. Several of the other couples were social workers and longtime friends of my wife's back to high school. 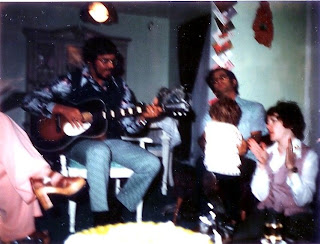 One of several parties with V. and M. V. is playing my guitar. Another gathering where mostly sanity prevailed. Note again the presences of children. V. was from the Caribbean and of African-Indian decent. The couple with the child on the right were Jewish. M.'s foot is on the left, she was a "good" Catholic Jersey Girl. 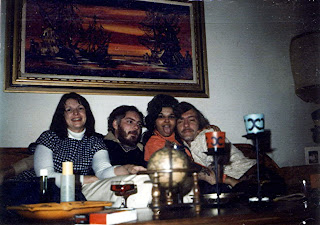