What's in a Name; Service and Miracles 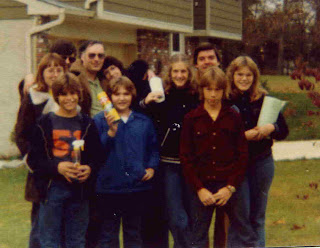 And on March 1, our baby girl was born weighing in at 5 pounds. The steroids must have worked on those lungs because she came out protesting loudly.
We named her Laurel. Many people assume this was after me, since my name comes from the same root and both Larry and Laurel mean Victory. This is not the case at all. We named her in honor of the members of Laurel Hill Bible Church who prayed constantly for her delivery. We gave her a middle name meaning "Little Christian", because Christ was now central in our lives.
My wife assured me that this time she did have her tubes tied.
Those gentle readers who have been regular followers of this Blog know God wasn't through proving what man couldn't do, He could.
One autumn day in 1980, as we walked along a chill street going to an early Christmas party, my wife says to me, says she: "Honey..."
"Ut oh."
"I think I'm pregnant again."
"But your tubes..."
"Lied...again."
"How long?"
"I don't think long. Maybe I'm in the second month."
A couple weeks later I am sitting in the waiting room of a hospital waiting to hear she had a miscarriage when a doctor comes out saying, "Congratulations, you have a daughter."
There was no human hand this time, no prayer circle, no laying in wait in bed, no steroids. My wife who could never have a baby and had that proved wrong now had it proved wrong medical aid was needed to do so. In a couple more years, we had a third, a son...and then she really did have her tubes tied. (More about these children next time.)
Today I believe in God. I believe in Jesus Christ and the Holy Spirit. I believe the Bible is God's Word. I believe all the promises God has made and that Jesus is coming again, perhaps very, very soon. I believe anyone can be saved if God draws them to Him. I don't believe it is ever too late until you die. In September of 1975, I was 34 years old. I had been spiritually dead a long time. I was a sinner who though he was a good guy, who didn't think the things he did were sins. Now next September I will be a Christian for 34 years. Half a life of sin, half a life of Salvation, half a life of growth in the Lord to go (using Yogi Berra logic again; I know fractions better than that).
So when I got saved I never faced any troubles again.  Yeah...right!
To be Continued: A Fairy-Tale Ending?
Posted by nitewrit at 10:20 PM