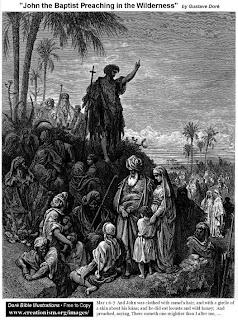 John the Baptist Prepares the Way

Perhaps some recall, in the beginning of the year I said one of my resolutions was to create my own Harmony of the Gospels in a translation I prefer. I try to also add some history and commentary as I go.  I have slowly been working on it. I have just gotten up to John the Baptist's ministry. I added the first part on John coming to the wilderness the other day.

You will see on my Night Writing in the Morning Light Blog a Blurb to the right showing the last update. However, the latest will say "two months ago" and above you see a date of January 4.

This entry was not posted to my Harmony on that date.  I am backdating the posts so the narrative shows chronologically with the Scripture on my Harmony Blog, so the latest post always shows the earliest post date.  Just thought I'd confuse everyone). Maybe as I go I will also post each new entry here as well.

Anyway, here was the first post on John appearing:

The beginning of the gospel about Jesus Christ, the Son of God, in the fifteenth year of the reign of Tiberius Caesar[Tiberius Claudius Nero BC42-AD37]-—when Pontius Pilate was governor of Judea [AD 26-36 Died AD39],, Herod [Antipas] tetrarch of Galilee [BC 4-AD 39 Died AD39],, his brother Philip tetrarch of Iturea and Traconitis[BC 4-AD 34 Died AD34], and Lysanias tetrarch of Abilene[AD 29 – see Note 1] — during the high priesthood of Annas[AD 6-15, President Sanhedrin AD15-66] and [Joseph, son of Annas, see note 2] Caiaphas, [AD18-37] the word of God came to John son of Zechariah],  in the desert.

Note 1.  An inscription was found on a temple from the time of Tiberius (the Roman emperor from 14 - 37 AD), which named Lysanias as the Tetrach of Abila near Damascus, just as Luke has written.

"For the salvation of the August lords and of all their household, Nymphaeus, freedman of Eagle Lysanias tetrarch established this street and other things."

Therefore the 15th year of Tiberius is the year 29 A.D., and it lies within the reign of the August lords. This evidence supports Luke's reference that Lysanias was a tetrarch around the time of John the Baptist (29 A.D.).

Note 2.  Annas, who’s name means "The grace of Jehovah" was the son of Seth and appointed high priest of the Jews in 6 A.D in his 37th year. He was high priest from 6 to 15 A.D. but as long as he lived he was the virtual head of the priestly party in Jerusalem. He was chosen to the high priesthood by Quirinius, the imperial governor of Syria; obliged to give way to Ismael by Valerius Gratus, procurator of Judaea, in the beginning of Tiberius' reign, 14 A.D. Eleazar, the son of Annas, followed Ismael; then Simon; then Joseph Caiaphas, son-in-law of Annas (John 18:13).

In the time of Christ high priests were appointed and removed at the command of the Roman governors. Although removed from office, Annas' power and influence was so great that five of his sons, as well as his son-in-law Caiaphas and his grandson Matthias, also became high priests. Years afterward he lost the high priesthood, but even then he was popularly considered as still in office and was called "high priest"; even after Pentecost his name appears first in the list of priestly leaders:

Acts 4:5-7 "And it came to pass, on the next day, that their rulers, elders, and scribes, as well as Annas the high priest, Caiaphas, John, and Alexander, and as many as were of the family of the high priest, were gathered together at Jerusalem. "

In John 18:19, 22 the high priest is undoubtedly Annas, although in vs. 13 and 24 Caiaphas is mentioned as the high priest. Annas is referred to in connection with the beginning of John the Baptist's ministry, which took place "in the high-priesthood of Annas and Caiaphas" (Luke 3:2 ), as though father and son-in-law were joint holders of the office.

It seems clear that due to his ability and force of character he was virtually high priest, although Caiaphas had the title. When Jesus was arrested, He was first brought before Annas (John 18:13). It was apparently Annas who questioned Him about His disciples and His teaching, and who gave orders to one of the officers standing by to strike Jesus with his hand (18:19-22). After the questioning, he sent Jesus "bound" to Caiaphas.

John 18:19-24 "The high priest then asked Jesus about His disciples and His doctrine. Jesus answered him, "I spoke openly to the world. I always taught in synagogues and in the temple, where the Jews always meet, and in secret I have said nothing. Why do you ask Me? Ask those who have heard Me what I said to them. Indeed they know what I said." And when He had said these things, one of the officers who stood by struck Jesus with the palm of his hand, saying, "Do You answer the high priest like that?" Jesus answered him, "If I have spoken evil, bear witness of the evil; but if well, why do you strike Me?" Then Annas sent Him bound to Caiaphas the high priest."

He was undoubtedly the ruling voice in the council that condemned Jesus, although nothing is said about his part in the proceedings that followed the preliminary questioning. He was present at the meeting of the Sanhedrin before which Peter and John defended themselves for preaching the Gospel of the Resurrection (Acts 4:6).

Annas is called "high priest," Caiaphas, John, and Alexander are called "of his kindred." He lived to old age, and he had five sons apointed as high priests. http://www.bible-history.com/HighPriests/NTHIGHPRIESTSAnnas.htm

In those days John the Baptist came, preaching in the Desert of Judea and saying, "Repent, for the kingdom of heaven is near." This is he who was spoken of through the prophet Isaiah. As it is written in the book of the words of Isaiah the prophet:

"I will send my messenger ahead of you, who will prepare your way A voice of one calling in the desert, 'Prepare the way for the Lord, make straight paths for him.

Every valley shall be filled in, every mountain and hill made low. The crooked roads shall become straight, the rough ways smooth. And all mankind will see God's salvation.'

2 Speak tenderly to Jerusalem, and proclaim to her  that her hard service has been completed,  that her sin has been paid for,  that she has received from the LORD's hand  double for all her sins.

3 A voice of one calling: "In the desert prepare  the way for the LORD; make straight in the wilderness a highway for our God.

4 Every valley shall be raised up, every mountain and hill made low; the rough ground shall become level, the rugged places a plain.

5 And the glory of the LORD will be revealed,  and all mankind together will see it. For the mouth of the LORD has spoken." Isaiah 40: 1-5

There came a man who was sent from God; his name was John and so John came. He went into all the country around the Jordan, baptizing in the desert region and preaching a baptism of repentance for the forgiveness of sins. He came as a witness to testify concerning that light, so that through him all men might believe. He himself was not the light; he came only as a witness to the light.

John wore clothing made of camel's hair, with a leather belt around his waist, and his food was locusts and wild honey.