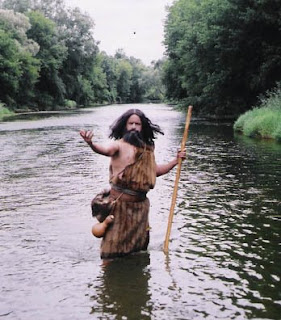 I added some additional informtion to my Harmony and am also posting it here.  This answers some questions I was asked in the comments, as well. LEM

Perhaps we should talk about John’s appearance and diet here.  I have seen several artists’ renderings of John the Baptist and some present a character out of the Flintstones, a Neanderthal of a man in a brief costume of fur. All he needs is a thick club resting on his shoulder and he could be Ally Oop.  It others and some films, he is presented in an unruly long beard and a great bush of untamed hair as if performing a Wild man of Borneo act in the circus sideshow. Why would throngs of people come out to be baptized by such a creature? They’d more likely flee the other way thinking him possessed.

Scripture simply says he wore clothing made of camel hair and a leather belt around his waist. His clothing has been wove from camel hair didn’t necessarily have to look much different from what others wore.  Some Bible historians believe he wore a simple robe similar to and recognized as that worn by many Old Testament Prophets, for indeed, he was the last of these.

I rather imagine John was pretty clean; after all, he spent most of his day in water. His hair and beard may have been kept smoothed down by that element. Besides, nowhere in scripture does it say he was anymore hairy than anyone else. Some suppose he was a Nazirite because Gabriel had told Zechariah, “He is never to take wine or other fermented drink”.  But it is never said a razor will never touch his head. John MacArthur is one who claims he was a Nazirite, but nowhere in Scripture does it say John took such a vow. He may have had a well-trimmed beard and been bald for all we really know.

PORTION OF THE NAZIRITE VOW

1 The LORD said to Moses, 2 "Speak to the Israelites and say to them: 'If a man or woman wants to make a special vow, a vow of separation to the LORD as a Nazirite, 3 he must abstain from wine and other fermented drink and must not drink vinegar made from wine or from other fermented drink. He must not drink grape juice or eat grapes or raisins. 4 As long as he is a Nazirite, he must not eat anything that comes from the grapevine, not even the seeds or skins.

The other question about John concerns that Breakfast of Champions, locusts and wild honey.

We probably have no difficulty with the honey part. Honey is one of our oldest known foods, being mentioned as such as far back as 2100 BC; that’s BC, folks. Honey is “an organic, natural sugar alternative with no additives that is easy on the stomach, adapts to all cooking processes, and has an indefinite shelf-life.”

John the Baptist is living in the wilderness and is going to eat what is available and plentiful there. Grasshoppers or Locust (there is a difference, but most people wouldn’t make the distinction*** on seeing one, nor do the Gospel writers necessarily make one and translations sometimes say grasshoppers) are a common food in certain regions of the world. John probably found them delicious when sweetened by honey. The word translated as locust is “akris”.

Akris: a locust, particularly that species which especially infests oriental 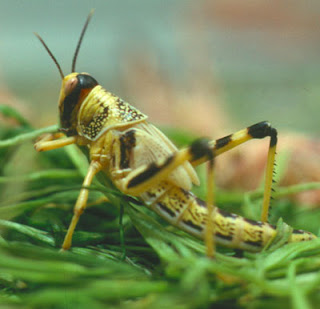 countries, stripping fields and trees. Numberless swarms of them almost every spring are carried by the wind from Arabia into Palestine, and having devastated that country, migrate to regions farther north, until they perish by falling into the sea. The Orientals accustomed to feed upon locusts, either raw or roasted and seasoned with salt (or prepared in other ways), and the Israelites also were permitted to eat them.

There are, however, some winged creatures that walk on all fours that you may eat:

those that have jointed legs for hopping on the ground. Of these you may eat any kind of locust, katydid, cricket or grasshopper. But all other winged creatures that have four legs you are to detest. Leviticus 11:21-23

This all seems pretty clear, so why any question? 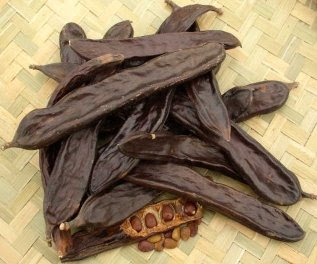 Others argue what John was eating the fruit of the Locust Tree. This is an evergreen tree that grows as high as fifty feet and in the spring produces a huge quantity of pods called Carob. These pods are sweet inside (lot of sweet piling up here with the honey). In some parts of the East, these pods are called “St. John’s Bread” and people there believe this is what John the Baptist ate. And Carobs are dried and used as food for both cattle and people.

There is nothing in the statement that “his food was locust and wild honey” that precludes John eating other things. At the time of his ministry he was pretty busy and these things were handy and easy to prepare. Growing up he probably ate the traditional kosher meals of his parents and even as an adult might have had occasion to supplement his regular limited diet. And since John would have been very exact in trying to obey God in all things, he surely took part in the required Ceremonies and Feasts. And eaten the Passover lamb. So, lets focus more on his purpose and his ministry than his mealtimes.

***It is very common for people in my area to call the cicada, locust and to call actual locust, grasshoppers, since locust and grasshoppers look very similar. A cicada does not resemble either much, though.

Email ThisBlogThis!Share to TwitterShare to FacebookShare to Pinterest
Labels: Beyond Common Statements, BITS, Harmony of Gospels, John the Baptist, Traditions