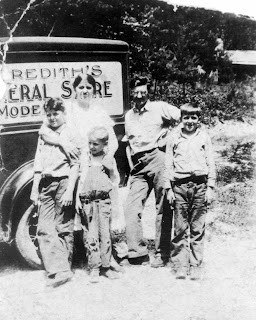 When I was a boy in my father's house,
still tender, and an only child of my mother,

he taught me and said,

"Lay hold of my words with all your heart;
keep my commands and you will live. Proverbs 4:3-4

Well, maybe not.
They only commands I can remember my dad ever telling me to lay hold of were these: "Don't get an 'F' and don't get a girl in trouble."
Perhaps not a lot of guidence, yet as I consider it, fairly good advice. Making an effort to never fail and avoiding the disasters of immoral sex are not that bad a credo for success in life, at least from a purely secular viewpoint.
Although relations between my father and I were strained when I was a child, I look at my father with a great deal of admiration today. He had his flaws, but in many ways he is a good role model and he always provided. Given his own tough start in life that is saying a lot.
He was born in 1918. We are celebrating his 91st birthday this weekend.
In the first picture in this post, my dad is the boy on the far left, the one with his mother's arm about him. His youngest brother, Francy, is the blond boy next to him. His other younger brother is on the right in front of their father, Benjamin
Franklin Meredith III. His father had about a half-dozen years left to live when this photo was taken. Everyone else in the photo is now deceased, except my dad.
My father left school after sixth grade. He had missed some schooling because they thought he had Tubercolousous as a child. They were wrong, he didn't. Then as he began in Jurior high, he decided he had enough of books and teachers and he quit. he became a poster boy for a bad example. He would wander down and loiter on a bridge near the school. One day a teacher pointed him out and told the class to "take a good look at a fellow who would never amount to anything".
My dad was cursed from the beginning. His grandfather owned a lot of property where they lived and several houses in the county seat of West Chester. he also had a farm and a general store. My father was named for his Grandfather, William Wilson Meredith. It didn't help. His grandparents hated him from day one.
My father's mother, Florence, worked for the family. She married his father in 1918. He was 19, she was 27. My father was already conceived at the time of the marriage. His grandparents resented Florence, claiming she seduced the boy, that she was a golddigger and they took their anger out on my dad, although a
newborn has no responsibility in the choices of those who created him.
When my father was 18, his own dad died of pneimonia, as did his maternal Grandfather and his Grand Uncle. All three died within a couple of weeks of each other. My dad went into the CCC (Civilian Conservation Corps) in order to support his mother and two brothers. There was little support or encouragement coming from his paternal grandparents. His Grandmother tried to prevent him from doing this. "You aren't joining the CCC. That's for nobody but ne'er-do-wells and niggers." [I debated using that word, but I don't believe in hiding realities for the sake of sensibilities. This is a quote and reflects both the mean attitude of my dad's grandparents toward him and the prejudices of those times.]
My dad spent time in the CCC and worked on the Skyline Drive in Virginia. The money he made went back to his mother. She and his brothers lived in a home owned by his grandfather in Modina, Pennsylvania on a street then called Meredith Row. (Now called Meredith Court it is made no more upscale by the name change.) 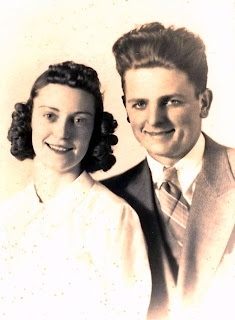 My dad met my mother on a blind date to an amusement park. They obviously hit it off. My mother lived in Whitford with her parents. My dad would walk the ten miles from his home to hers to visit. he would often stay for supper and sometimes sleep on their porch overnight before hiking back to Modina.
I don't think they were a bad looking couple. (I once had a head of hair like that, too.)
My dad was 5 foot 11 and had a very muscular build in his youth. My mom was 5 foot 2, with eyes of blue and auburn red hair.
Between 1936 and 1938, David O. Selznick conducted a nationwide search for a "fresh face" to play Scarlett O'Hara in the film "Gone with the Wind". I imagine it was more a publicity stunt than a serious talent 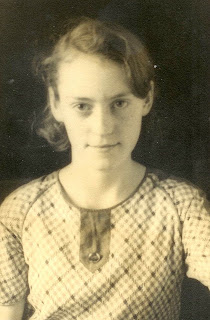 search, but my mother was one of the hundreds of young women interviewed. My mother would have been 16 to 18 years old at the time. I don't have a phot of her at the time. I do have one at age 15.
My mom and dad married on her birthday in 1940. (I came a year and a week later.)
Posted by nitewrit at 3:28 PM

Email ThisBlogThis!Share to TwitterShare to FacebookShare to Pinterest
Labels: BITS