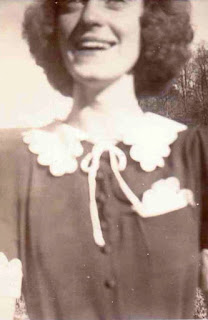 My mother suffered a stroke on April 1, 2012. Before that day she had been independent, albeit sometimes using a cane. She was caretaker to my dad. The stroke was in the Pons area of her brain stem. It took away the use of her left hand and left leg and led to a feeding tube inserted in her side. So she loss her ability to walk and eat, and to do much handling of things. The speech was unaffected.

Her mind was clear and focused until the end. During the last few days when she was actively dying this brought even the experiences Hospice nurses to tears. One told me this was the darkest thing because my mother was aware and responsive to everything going on and most people by that stage were not.

My father sat beside her bed holding her hand those last few days. On Sunday morning he had a build up of fluid in his lungs and they took him to the hospital.

I sat with her Sunday afternoon and held her hand. I told her not to worry about anything. All was taken care of and under control. I told her I loved her and bid her goodnight. 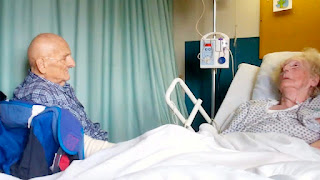 Dad holding mom's hand the day before the end.

I want to tell a story and a last lesson my mother taught me about what we should value.

My mother was born in 1920 and her growing up was not in a home her parents owned. There was a prominent family named Thomas, one of the founding families of the Quaker Track in Chester County, Pennsylvania called Whiteland. My mother’s family was tenants on George Thomas III’s estate “Whitford”, in an old white house back of a pond. The “big house” she called it. There was a Blacksmith Shop down the lane from them. That smithy was still working when I was a boy.

She was nine when the Great Depression began and it lasted until she was a grown woman. The family had some hard times. My mother said one of her fondest memories of childhood was every Christmas Mr. Thomas would come to the house and give her a new pair of gloves.

Her dad pulled weeds for a dollar a day. The average America salary was $26 a week, he was making five or six. Her mother became a maid for the wealthier in West Chester and at some point teenage mom labored in the dark of a Mushroom plant, while dreaming of being a motion picture star.

She even entered a talent search for an unknown to play Scarlett O’Hara in “Gone With the Wind”, but she didn’t win. Somebody named Vivian Leigh got the part. The movie premiered in 1938 and in that year a friend asked mom to go on a moonlight cruise with her, her boyfriend and a friend of his. That’s where she met her Rhett Butler back 74 years ago. He was this tall, wavy haired fellow known as Wild Bill.

He must have thought this little 5 foot one, 98-pound redhead was something, because he’d walk the 15 miles from Modena to Whitford to see her, sometimes sleeping on her porch before walking home again.

Just before they married in 1940 he lost his job and after the wedding they were so poor she went to her home to live and he to his. And so they lived separated the first month of their marriage and except for World War II that was the last time Milly and Willie weren’t together until she left him last Sunday night.

On Monday, when a nice lady from the Hospice went with my daughter and I to the hospital and told dad mom was gone, he quoted Scripture to us. There was once a day when no one would have believed that Wild Bill would ever quote Scripture. It was right after he said, “She was the love of my life and I will miss her.” It was part of a verse from Hebrews. He said, “Well, it says don't it, it’s appointed to every man to die? And now she’s better.”

My daughter, Laurel, and I brought her things home from Pembrooke (the nursing home) that same day, five cartons. Five Cartons was all that was left of what she gathered in her 92 years, mostly clothes, which we donated to Goodwill. All her worldly goods are gone. And it made me think of Matthew 6: 19-20, and made vivid the truth of that Scripture. “Do not store up for yourselves treasures on earth… store up for yourselves treasures in heaven.”

But she did have some valuable treasures here as well. She had a group of friends, who loved enough to care for her and dad these last years and see them thought when they couldn’t always do for themselves. Thank you and bless you all for loving my mother.

And she had a man who even after 72 years of marriage insisted on sitting by her side all her final days holding her hand.

I spent a few minutes alone with mom on the Wednesday afternoon after she passed. It was a sneak preview just for her son of the girl who once dreamed of being a movie star before her final last staring role on Friday. I told her not to worry; dad would be by her side soon.

And they can enjoy their Heavenly treasures together. 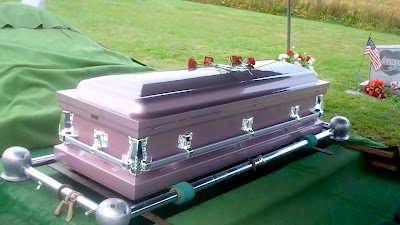