A Wanderer At Journey's End 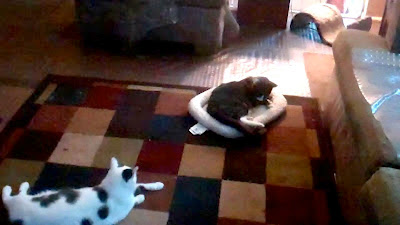 Death is all around me. It is like a heavy fog that will not lift. It covers me like a blanket at night and a cloak during the day.

Last Friday we buried the body of my mother and yesterday, October 2 on his 94th birthday, my dad entered Hospice Care for his last journey.

And last night at 11:54 PM another journey came to an end. Hobo Joe died.

I do not know what his original name was nor how old he was. He had belonged to someone at sometime. He was neutered and housebroken and for a large cat genteel with people. A Snowshoe Cat we believe, my daughter said he had Siamese in him because of the shape of his head, and he had those large white feet. If so, it was an apt breed for we first saw him in the storms of 2010, those blizzards that hit that year and buried us in feet of snow.

He came wandering into our yard every day a-sudden during that chill time. He would look at you and vocalize, but then hurry off into the brush. Our own cat, Brad, a Houdini of a cat, escaped the house for a while and the two of them were often somewhat distant companions hunched against the winter background. We finally corralled Brad and now this large black cat was alone again.

All that winter and that spring he haunted our yard at times. We put food out for him, but he was caution to any approach. Until one May evening, just when my daughter arrived home from work. It was a pleasant warm late afternoon and my wife, Lois, was working on the bushes before the house when the cat appeared in the drive. Lois sat down upon the stoop and called to him and he looked over. Eventually he ambled close and let her stroke his head and he didn't flee when my daughter pulled in and came up the walk. Laurel, who is a VetTech used to working with cats scruffed him and carried him into our home. We placed him in the bathroom with a cat bed and he settle upon it and slept.

This lost wanderer had a new home and a new name, Hobo Joe.

He quickly adapted to the family. He was the biggest cat and not mean, but assertive. None of the others were about to give this stranger any trouble.

One summer night not long after, my son came home carrying a scruffy, scared, starving kitten he had rescued from the parking lot where he worked. He named the kitten, barely weaned, Kerouac. For what ever reason, Hobo Joe took this kitten under his wing. It was if they were father and son and they forever bonded.

I have been stoic through these harsh few months and days, but I almost lost it this morning when Hobo  managed to walk feebly down our hallway toward the kitchen, as he always did when I got up. He lay down halfway to rest. He suddenly flopped over and I had thought he was gone, but when I touched him, he got back onto his haunches in that positions cats often take. It was then that Kerouac came over and began to groom him.

Somewhat later I placed him on a little carrier bed and took him into the living room to be with me. Kerouac came over and lay down a few feet away as if in vigil for his adopted father. That is when I took the photo at the top of this post, Hobo Joe laying halfway between Kerouac and the light at the end of the tunnel of his life.

I had to go and tend to my own father in the afternoon and expected Hobo would be gone when I returned, but he was still alive. I was with them last night until the end.

Hobo Joe was one of my favorites. He was one of the three that always greeted me when I awoke in the morning, the same three who would be waiting at the door every time Lois and/or I would come home from somewhere, our little welcoming committee of Mark, Kerouac and Hobo Joe. Now it is diminished by one.

I will miss him, he was with us such a short time.  Rest in piece, your hobo days are done. 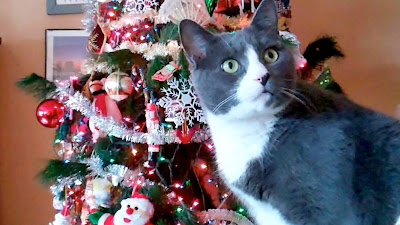