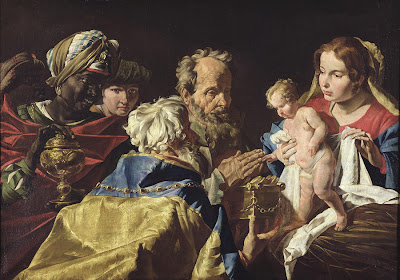 I read today that Christmas sales were down this year. The alleged reason was people were holding back in fear of the fiscal cliff. If this is true, I do not know, but I know this is what Christmas has been reduced to in my country - how profitable stores are in December.

How sad and how did we end up down this road of Christmas shopping being our most worshipped seasonal god?

As far as I know it began with the Magi, better known in pop culture as the the Three Wise Men, although it may have been three hundred wise men in that caravan to Bethlehem. Scripture never places a number on them.

After Jesus was born in Bethlehem in Judea, during the time of King Herod, Magi from the east came to Jerusalem and asked, “Where is the one who has been born king of the Jews? We saw his star when it rose and have come to worship him.”
When King Herod heard this he was disturbed, and all Jerusalem with him. When he had called together all the people’s chief priests and teachers of the law, he asked them where the Messiah was to be born.
“In Bethlehem in Judea,” they replied, “for this is what the prophet has written: “‘But you, Bethlehem, in the land of Judah,  are by no means least among the rulers of Judah;  for out of you will come a ruler  who will shepherd my people Israel.’”
Then Herod called the Magi secretly and found out from them the exact time the star had appeared. He sent them to Bethlehem and said, “Go and search carefully for the child. As soon as you find him, report to me, so that I too may go and worship him.”
After they had heard the king, they went on their way, and the star they had seen when it rose went ahead of them until it stopped over the place where the child was. When they saw the star, they were overjoyed. On coming to the house, they saw the child with his mother Mary, and they bowed down and worshiped him.
Then they opened their treasures and presented him with gifts of gold, frankincense and myrrh.  Matthew 2: 1-11 NIV

Out of that rather odd assortments to a baby out modern tradition of gift-giving evolved. Now buying and giving gifts has eclipse most everything associated with Christmas. We got to have a good gift, too. Look at that poor shepherd boy fretting over not having a gift worthy to give a king. Actually, other than the wise men, I don't recall anyone else heading down to the stable with gifts in hand. And when the Magi arrived, perhaps two years after the birth, they didn't take their gifts to a stable either. Joseph and mary were living in a house when they showed up.

The gifts of frankincense and myrrh were hardly what you or I would present a child, ointments for burial. But this was a gift pointing to the future. The gold probably financed Joseph and Mary's flight into Egypt to keep the child safe from Herod. I don't know what they would have done with a Chia Pet, Snuggie or what-ever the gimmicky gift of 2012 might be. At any rate, they didn't give presents to each other, they gave them to Christ.

Last week as we drove up to Toms River to do hurricane relief we passed a church. Its sign read, "Christmas is not your birthday!"

But you know what? It could be.

Why has Christmas been celebrated with such joy all these centuries? It hasn't been because of the gifts we hand each other every December 25, it hasn't been the visit from Jolly Ol' St. Nick or the singing of Rudolph the Red-Nosed Reindeer.

It's been because of the gift given, not by the Magi, but by God. It is the gift of the babe in the manger, a child given to die horribly so we could live eternally.

I have nothing against the exchanging of gifts if given out of love for those we give to and not with expectations we will be glorified for what we gave. Nor should we give with any expectation to be given in return. But after we have unwrapped all these worldly treasures that by next year will be lost, broken or forgotten we should seek the gift that all of this should represent. That gift of salvation given to the world on that first Christmas Day. 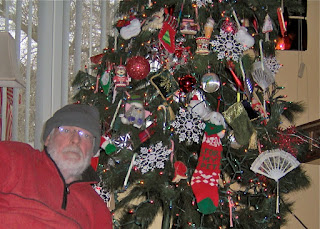 There is nothing else of such value.

Top Illustration: Adoration of the Magi by Mattias Stomer
Posted by nitewrit at 9:19 AM