Getting Here: Part 1 - Making of a Loner 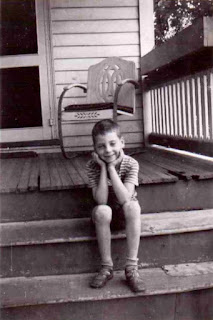 I thought it wise to tell how I first got lost, how I found myself in an empty black hole and how God rescued me.

Part 10: God But a Heartbeat Away

And so we begin at the beginning.

Just before my parents wed, my father lost his job at a scrapyard. They couldn't begin married life together because they were too poor. Each remained living with their parents. In my father's case this meant his mother and two younger brothers. His father had died during his late teens and he had supported the family by joining Roosevelt's Civilian Conservation Corp. 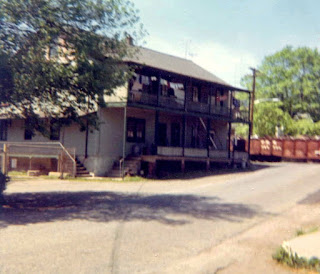 My father was a high school dropout and rapscallion as a boy, not the best credentials for entering adult life. Now wishing to live with his wife, he was forced to beg a home from his grandfather and namesake, who held the sins of his parents against him. His grandparents all but disowned him and berated and insulted him through his youth. But his grandfather, who owned most property about the town of Modena, did allow him to rent a bug-infested apartment next to the train tracks. This became my first home. 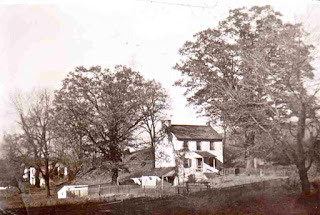 It didn't remain so for long because of that bug infestation. My parents rescued me from the insects nightly dinner plate (my crib) to the country climes of Whitford, moving in with my maternal grandparents, who rented an old house (pictured left) on the estate of George Thomas III, a prominent member of Chester County's founding families. This had been my mother's childhood home. It was not to become mine.

In December of 1941, for reasons I have never learned and probably never will, we moved again,   grandparents, parents, Nellie my mother's dog and me, to Downingtown. The picture atop this page is me, age 3, sitting on the front steps of the new home my grandfather rented for us. My grandfather was a carpenter and eventually repaired that floor. By the time of this picture my father was in the South Pacific fighting the Japanese.

From all accounts, I was a happy, outgoing, friendly, trusting lad then. I always looked so in my earliest photographs prior to 1947.

An event occurred at the beginning of that year that was to change the child I was into something different. After 1947 I would become an often unhappy, withdrawn, socially awkward, suspicious, but self-dependent boy. In the prior year my dad returned from the war and eventually got a job as a long-distant truck driver. He had been away for two years and now he was seldom home during the week. Our relationship grew as distant as his weekly delivery destinations. But even more affecting upon me was he moved us into the swamp house (pictured right). 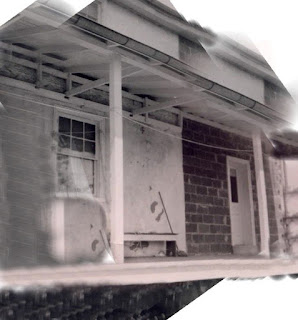 He got it rent free from his employer and because he was a returning vet. It was in the country, removed from nearly everything and everybody I knew. It sat down a long lane partially surrounded by a marsh. Behind was a cornfield and to the other side a cow meadow. The nearest neighbors were a mile up the highway and none had children near my age. My father was on the road all week and my mother didn't drive. It was desolate isolation.

It is not completely true there were no children my age. There were three boys, brothers, one a year older, one a year younger and one just right. But I only knew them the one summer. Their father was killed in the war and they attended the boarding school in Hershey three-quarters of the year. In that summer we became "best" friends, playing cowboys at each other's place. They had a sister. She was the youngest, about four. I witnessed her death on the highway, going with her brothers from my place to hers on the last day of summer. The boys went back to Hershey and I never saw them again.

We lived in the swamp for two years, until my dad changed jobs again and we lost the house. I wasn't unhappy living there. For a child with my imagination and curiosity it was almost a Garden of Eden. There was so much to explore and the close changes of environment, swamp here, open meadow there, a sledding field behind, a woods in walking distance, made for great adventure in my imagination.

And I was free from many restrictions other kids had. Traffic was no concern as long as I stayed away from the highway. There were few rules imposed upon me. I explored at will. I was generally left to my own devices, entertaining myself by inventing games and stories. I grew very self-sufficient.

I wasn't completely cutoff from civilization. I went to school, of course, to a school I remember nothing about as an adult. It has been erased from my memory for some reason. School apparently was not the center of my life at the time. I also was shucked off to my grandparents on weekends when my dad came home. I would be dropped off Friday night and taken home Sunday evening after dinner. Obviously an arrangement that did little to bring me and my father together.

I spend many of those weekends in the company of my grandfather (pictured left), who I loved dearly. He was the father and man figure in my life. He was a gruff man, well-known about the town and well-liked. His delights were cigars, whiskey, chewing tobacco, fox hunting, boxing matches and telling the occasional dirty joke. He had an admirable vocabulary of cusses as well. He took me on many a fox hunt and to the dives and dingy bars that dotted the county. Probably if I actually didn't spend most of my youngster days in the company of the womenfolk I would have glommed onto his habits, but despite my affection for the man, his delights did not become my own. He died from the ravages of alcoholism with I was sixteen.

At the beginning of 1950 we moved back to Downingtown, back in with my grandparents at first. I was back on the old block and in the school where I had begun first grade. I was now in third grade with the same children I knew then, some of whom lived on that same block and were once my closest friends. Everything seemed the same, but that was an illusion. I was different.

Living in the swamp I had learned to be alone. Back in town it didn't take my contemporaries long to show as far as they were concerned that was all I was and should be, a Loner.