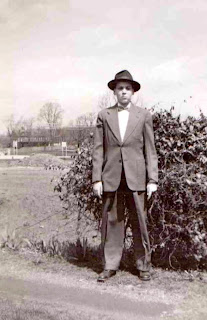 Most people are born into a religion. Given the time and place of my birth it is not surprising that religion was Christianity. I was Baptized several months later at the Methodist Church where my parent's had married.

My family had a religious history. My mother's had a long affiliation with the Methodists on her father's side and the Reformed Church of Christ on her mother's.

My father's paternal ancestors had landed on these shores in 1683. They were among the Welsh Quakers chartered part of Chester County, Pennsylvania by William Penn. His mother's side, which had arrived from Scotland in early 1774, were longtime Presbyterians.

Although many of my ancestors were very devout, not much of that religious background was apparent in my life. No one was going to church on any regular basis, perhaps on Easter or Christmas. We said grace at Sunday dinner, a task that fell to me once I was able to talk well enough. My prayers were pretty short and repetitive.


In 1950 we moved back to Downingtown from the swamp.  I had left that town halfway through first grade and came back halfway through third, a mere two years that may as well been 200. These were years during which my old classmates formed cliques and bonding.  I wasn't there thus was left out of that process.  My best friend from earlier days had moved away. The boys I once considered friends now made fun of me, even bullied me.

Some girls I knew from before remained friends, but playing jacks and hopscotch with Iva and Judy hardly won the other boys over to my side. At recess I was one of those left dangling to near the end when sides were chosen for games. I didn't know the fundamentals of most team sports, except soccer for some reason. Soccer was not the game of choice in town; it was football and baseball.

Religion started off every day at school.  In those times the school day opened with the Pledge of Allegiance to the Flag, The Lord's Prayer and a reading from the Bible. No, I wasn't sent to some Christian academy, these were public schools. Any Christian Love espoused by any of those passages didn't last beyond the closing of the Bible and first bell. I remained some kind of pariah to most of these kids. 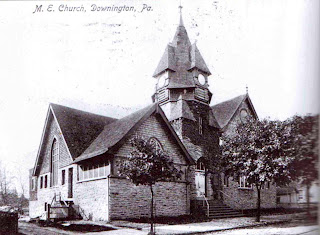 Also, once back in town, it was decided I should go to church.  Each Sunday I was dressed in my one suit and "good" pair of shoes and sent walking the length of Washington Avenue to attend Sunday School at the Methodist Church. I hated it. For one thing the direct route took me through the territory where a gang of older boys always came after me if I was spotted. For another, no one else in my family was going to church, why me? I found Sunday School terribly boring, plus I wasn't excepted in with the kids there either.

I didn't see much value in any of this religious stuff. It was something to be endured because adults made you do it. God wasn't answering any of my prayers. I woke up in the morning and my enemies were still there.

As I aged it only got worse. I was tall, thin and gangly, with a slightly hunched back. I was sometimes called "Quasimodo" or worse. By seventh grade I also had to wear glasses, so "four-eyes" got added to the insults.

These things drove me more into myself. I was perfectly happy being alone. I began to write and spent a lot of time in the town library. When I began Junior High I stopped going to Sunday School. I just made such a fuss about it my mother gave up trying to force me.

Now, I don't want to paint  a picture of being a totally pathetic figure huddled in some dark garrett. It is not that I didn't make friends, but they were generally considered "different" too. Stu was the only Jewish kid in town at the time, a fact that exposed me to anti-semitism. Ron was as thin and gangly as I and threw like a girl. Dave wore glasses and had weird hair. Franny was black and thus I also became exposed to racism. He wasn't even allowed to visit my home. Bill was small. Sam was a girl; a Tomboy. None of my friends reflected much in the way of religious beliefs, except Stu and his were mocked by my father, who wasn't altogether approving of my friendship with a Jew. He didn't even know about Franny. 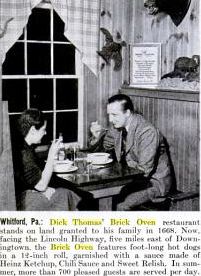 Overtime I took part in various activities that I enjoyed, Boy Scouts in particular. I also began going to MYF meetings in Ninth Grade. A boy in my class invited me, but I only went because they were going to a favorite restaurant of mine at the time, Dick Thomas' Brick Oven. I thought I'd go that one time, but I enjoyed the evening and began going regular.

The Pastor decided we should know about different religions and over several weeks a priest, a rabbi, a whatever would come and speak to us about what they believed. I found it very interesting, but it did nothing to bring me closer to God. They all seemed very sincere. How was I to know which was right? Maybe none were? I asked the Pastor one day, "If God made the universe, then who made God?" He gave some stock "with God everything is possible" and left it at that. I thought I had him; I thought I was pretty smart.

Boy Scouts, MYF, Babe Ruth Baseball and my paperboy job all came late in my junior high years and before too many months of involvement with any of them my parents moved us out of town again. After years of living with my grandparents or renting a house nearby, my parents managed to buy a home of their own. It was several miles north of Downingtown out in the country.

I was back into a form of isolation again.

Much to my surprise and chagrin after moving my parents began to go to church, and of course, expected me to begin so again as well.  I was 15 when we moved. I was forced to join them in the pew every week, but when I turned 16 and got my driver's license I made a deal. I would go to Sunday School, but not Sunday Service.

It was not that Sunday School thrilled me. It was even more boring than the one at Downingtown. However, when Sunday School ended I came home to an empty house while my folks were at church. I wanted to have that alone time. I had some special magazines hidden away in a back spot of my closet I wanted to read, or more precisely, magazines with pictures I wanted to look at.

If religion was supposed to make you feel good, then I had a new religion and these magazines were my bibles.

I soon made another deal with my parents. I would go to MYF (Methodist Youth Fellowship) rather than Sunday school. MYF met on Sunday evenings. It was more fun than Sunday school. Yeah, we had lectures about the Bible, but then we played games. Sometimes we had outings, hayrides or cookouts. 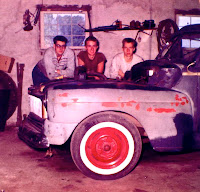 As it were, I was elected President of MYF. I actually had power over the agenda of our meetings. I changed the lectures to discussions. I would introduce some Bible story each meeting and then play Devil's Advocate to get the arguments going. The meetings were pretty lively and our membership began to grow. I was being praised because of this, but in reality I wasn't just playing Devil's Advocate, I was trying to ridicule these stories.

The move from Downingtown changed much in my life. My social circle had widened. I still was friends with Stu and Ron, but now I had other friends and we spent our spare time on cars, girls and parties. Days were for souping up our cars and nights were for drag racing up and down Pottstown's main street. 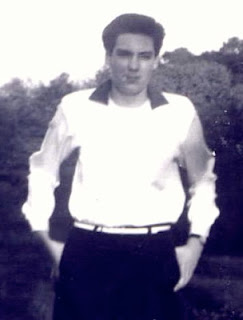 Life had changed for me at my new school as well. The first year I remained a fringe character, although I wasn't being subjected to the constant put-downs I had experienced in Downingtown. I was sitting at a typewriter many nights that first year, typing out short stories and poems not yet knowing this would make me popular in the next year. Writing had been an escape from the world, now it was to become a door into the world.

When you are a loner who has lost your religion stepping through the door into the world can be a dangerous step.