An Experiencing God Journal; Putting Out a Pet Peeve 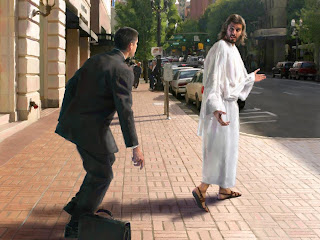 You can look at the photo on the left and interpret it one of two ways. You can see it as the businessman dropping his current life on the spot to follow Jesus calling, which is the photographer's intension. Or you can see a man lurching forward in some trace-like stance after a charismatic figure, just a sudden spur-of-the-moment impulse.

I say this because of the man's stopped, ape-like posture. I know it is suppose to indicate the man has just placed his briefcase down, but it still comes too close to presenting a false picture of the passage it was taken to illustrate, Mark 1:16-20.

Passing alongside the Sea of Galilee, he saw Simon and Andrew the brother of Simon casting a net into the sea, for they were fishermen. And Jesus said to them, “Follow me, and I will make you become fishers of men.”  And immediately they left their nets and followed him. And going on a little farther, he saw James the son of Zebedee and John his brother, who were in their boat mending the nets. And immediately he called them, and they left their father Zebedee in the boat with the hired servants and followed him. (ESV)

Mark is not the most verbose of the Gospel writers. His presentation sometimes reads as almost an outline or synopsis more than a narrative. It goes from even to event rapidly and often without connecting sequences. Here are the passages immediately before and after the calling to be fishers of men:


The Baptism of Jesus

9 In those days Jesus came from Nazareth of Galilee and was baptized by John in the Jordan. 10 And when he came up out of the water, immediately he saw the heavens being torn open and the Spirit descending on him like a dove. 11 And a voice came from heaven, “You are my beloved Son;[d] with you I am well pleased.”


The Temptation of Jesus

12 The Spirit immediately drove him out into the wilderness. 13 And he was in the wilderness forty days, being tempted bySatan. And he was with the wild animals, and the angels were ministering to him.

14 Now after John was arrested, Jesus came into Galilee, proclaiming the gospel of God, 15 and saying, “The time is fulfilled, and the kingdom of God is at hand; repent and believe in the gospel.”


Jesus Heals a Man with an Unclean Spirit

21 And they went into Capernaum, and immediately on the Sabbath he entered the synagogue and was teaching. 22 Andthey were astonished at his teaching, for he taught them as one who had authority, and not as the scribes. 23 And immediately there was in their synagogue a man with an unclean spirit. And he cried out, 24 “What have you to do with us, Jesus of Nazareth? Have you come to destroy us? I know who you are—the Holy One of God.” 25 But Jesus rebuked him, saying, “Be silent, and come out of him!” 26 And the unclean spirit, convulsing him and crying out with a loud voice, came out of him. 27 And they were all amazed, so that they questioned among themselves, saying, “What is this? A new teaching with authority! He commands even the unclean spirits, and they obey him.” 28 And at once his fame spread everywhere throughout all the surrounding region of Galilee.

This is the highlight reel: Jesus is Baptized, Tempted in the wilderness, John is arrested, Jesus calls his disciples and he casts out a demon, all quickly noted in Mark Chapter 1, and this isn't even the whole of that chapter. But a whole lot went on between those highlights. You need to read the other Gospels to fill in the gaps.

Yet, it seems, every film version of Jesus' life I saw presented this calling of the disciples as if Jesus just strolled by a bunch of strangers one day, said, "Follow me" and they impulsively went not knowing him from Adam.

Hollywood continues to depict it this way. They certainly did in The Bible Series on History. They show Jesus just strolling down a fairly empty beach, stop on the shore and stare at Peter fishing alone in a boat. Jesus wades out, gets in the boat, tells Peter where to fish and then tells him to follow. Peter asks what he is going to do and Jesus answers, "Change the world."

There is no sign of Peter and Jesus having met previously, no Andrew in the scene, whatever. But Andrew, James and John were involved and all these men had met Jesus previous to that moment and spent time with him. You have to go to the other Gospels, especially John, to get the whole picture. You have to go back to after Jesus came back from the wilderness being tempted by Satan. John the Baptist points him out and two of John's disciples approach Jesus. These were Andrew and John, the future Apostle. Andrew then immediately got Peter, his brother, and they spend the day with Jesus.

The next day they meet with Philip and Nathanael and then travel to Cana and a wedding. After the wedding they go to there home town, but later travel south to Jerusalem for Passover. They spend some time Baptizing in the wilderness after Passover before returning to Galilee via Samaria and home again. Then Jesus is rejected in Nazareth, moves to Capernaum and begins teaching about the area.  He has gathered a following and one day is being pressed by the crowd, so he waded out and got in Peter's boat. He told Peter to cast his net and so many fish were caught that Andrew came to help. It was now Jesus said, "Follow me and I'llk make you fishers of men."

As they were walking along the shore immediately after, Jesus called to James and John. But it wasn't some sudden impulse. Jesus had known these men for a period of time, talked with them, walked with them, taught them.

When I read this short cutting of the calling of the first Disciples on Day 2 of Unit 1 in Experiencing God I was concerned that the author would be cherry picking verses to serve his purpose, but as we have moved on through the lessons I can see this is not the case. In fact, I am more guilty of this by taking the author out of context and jumping to wrong conclusions.