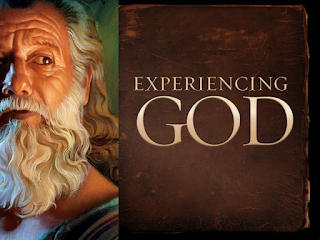 We have begun a new Bible Study at my church. It is "Experiencing God" by Henry Blackaby, Richard Blackaby and Claude King. It is a very challenging undertaking, to say the least.

Those who have known me long, or even perhaps through my Blogs, know I question everything. I think we should, especially people who profess to tell us about God. I believe this is Scriptural.


Beware of false prophets, who come to you in sheep's clothing but inwardly are ravenous wolves. Matthew 7:15 (ESV)

Beloved, do not believe every spirit, but test the spirits to see whether they are from God, for many false prophets have gone out into the world. 1 John 4:4 (ESV)

The brothers immediately sent Paul and Silas away by night to Berea, and when they arrived they went into the Jewish synagogue. 11 Now these Jews were more noble than those in Thessalonica; they received the word with all eagerness, examining the Scriptures daily to see if these things were so. Acts 17:10 (ESV)

In the opening portion of this journey there seemed heavy emphasis on a kind of immediate, almost blind faith following of God. I suppose I have a hair-trigger skepticism button and I never believed in blind faith. I believe in a knowing faith. I'm not sure how to define that, perhaps we can call it a trusting faith. Blind faith would be jumping off a bridge because somebody said, "Go jump off that bridge." Knowing faith would be because you knew jumping would serve a good purpose because you had trusting faith in who told you to jump.

When Peter stepped off the boat during the storm he did not impulsively jump overboard in blind faith just seeing Jesus walking on the water. He asked, "Lord, if it's you tell me to come to you on the water." When Jesus said, "Come," he went because he had a knowing faith of trusting Jesus. He had a little conflict then with what he knew he trusted and what he had been taught that he should know. What he had been taught was you can't walk on water and when he looked away from Jesus to the world he began to sink.  (Mathew 14: 25-30)

I think there is a lot of Peter in a lot of us Christians. We have a strong knowing faith in Christ most of the time, but there are still moments when we glance away and see the waves and think, "I better start swimming or I'm gonna drown," and we just begin to sink. Fortunately, Jesus always has us in his hand and isn't going to lose one whom God gave him.

So I guess I had my own little moment of looking at the waves and questioning what am I in the middle of. There was a lot of heavy emphasis in seemed on Abrams just up and going when God said go. The author asked, "How much detail was he (Abrams) given before God asked him to follow?

Now the Lord said to Abram, “Go from your country and your kindred and your father's house to the land that I will show you. And I will make of you a great nation, and I will bless you and make your name great, so that you will be a blessing. I will bless those who bless you, and him who dishonors you I will curse, and in you all the families of the earth shall be blessed.”


So Abram went, as the Lord had told him, and Lot went with him. Abram was seventy-five years old when he departed from Haran. And Abram took Sarai his wife, and Lot his brother's son, and all their possessions that they had gathered, and the people that they had acquired in Haran, and they set out to go to the land of Canaan. (Genesis 12:1-5)

And I though, if he didn't give a lot of detail, he did give a lot of incentive. It also said Abram "set out to go to the land of Canaan," which meant the journey ahead might not be a total unknown to Abram since we were told in Genesis 11:31-32 that Abram's father, Terah had initial set out to go to Canaan, but stopped far short and settled down. It appeared he was picking hop where his father left off. Verse 5 is a bit ambiguous saying, "They set out to go to the land of Canaan." The normal reading of that statement would be they knew from the start where they were going, which would imply God gave Abram more detail than we were given in the quotation. However, it is also possible the writer (Moses) knowledgable of where they ended up projected it back in this narrative while Abram didn't know his destination when he started.

None-the-less I was struggling with this and the author of the studies point of this kind of immediate blind following. My next thought went to Gideon and all his testing of God before he took action. (Judges 6:11-40)

But then as the early weeks of study conversed a thing called the Seven Realities was revealed and I could begin to place the events of Abram's journey (and Moses') into the context of this chart. I think it may be a bit more complex than the simple cycle of God working - God seeking a relationship - God inviting - God Speaking - Crisis of Belief - Major Life Adjustment and Obedience and Experience. Looking at these examples it would appear to me that me have a loop here, or at lease some smaller loops within the process (spoken as a former systems analyst). Abram-Abraham went through more than one crisis of belief, I think, with his most intense one involving the promise of a son when he didn't wait on God and had Ishmael by his own means. I think his true adjustment and peak of obeying and experiencing God came at the sacrifice of Isaac.

I will also admit I probably had my own little crisis of belief in this study's author on Day 2 when he hit upon a pet peeve of mine. I'll discuss that next entry. Meanwhile, I have made a big adjustment in my own mind about this study and I'm ready for that step of faith, not without a bit of inner trembling. Encountering God fully is not something to be taken lightly.