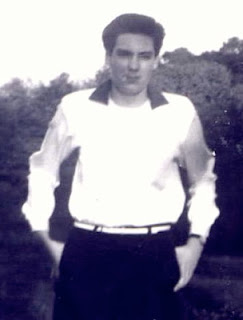 I think I was experiencing God very early on in my life. I wasn’t very receptive to him though. I didn’t like church and I didn’t like people waving their Gospel beliefs in my face. I couldn’t seem to escape either. I was forced to church, but I made deals with my parents once I was driving age. I’d go to MYF, but not Sunday morning church service. I even was elected President of MYF. Perhaps I’d not achieved this office if they knew what I was doing home alone while my folks attended Worship Services. Let’s just say I had my nose buried in some books full of pictures, very little text and certainly not depictions of Bible stories.
I remember one day walking out across a field with two friends. I heard a voice call my name plain as day. “Larry.” No one else heard it, even though it certainly seemed loud enough. It wasn’t in my head. It was a voice right there in the open air. “Larry,” it said again, but I kept walking. Three times the voice called my name.
I don’t explain it. I just tell you I heard this voice, a strong, clear voice. Was it God? I don’t know, but I know it scared me half to death. I was shook up by that voice for days and as you can see, I never forgot the instance (nor did I ever discuss it with anyone). I had a great imagination, I admit, but I wasn’t prone to imagining voices.
But it didn’t turn me away from my teenage desires and behavior. I still kept buying and hiding though magazines in my room. In fact, as I grew and married my path led further and further away from Godly pursuits. My wife and I were into pleasure and believe me in the artistic and Hippie life we lived there were pleasures to be had.
That’s when I had my second eerie experience. I was dying…well; I had certainly convinced myself death was eminent. Some sickness had laid me up in bed for days. I was pouring out sweat and had reached a point when I believed there was no hope. I even resorted to prayer, of all things.
It was then I saw the cross on the wall. It was just light formed into a cross, except there was no light. It was late night. Inside the room was dark and outside the windows was night. Yet there was a bright cross glowing on my wall. And at that moment I felt all the illness leave me. The next day I was back at work.
For days, every night, I looked for that cross, tried to figure out how light could gave played such a trick, but I never saw it again.
You’d probably say, “Hey, so that’s where you got religion?”
You’d be wrong. I went even further into darkness. I was getting into the occult. My Bible was now the Satanic Bible and my prophets were Edgar Cayce and Ruth Montgomery. If anyone ever searched out the pathway to Hell, it was I in the late sixties. I was reading to believe anything paranormal, except God. One night my friends and I drove all about Delaware County certain we were trailing flying saucers invading Pennsylvania.
Then a sudden, just as I had given up smoking cold turkey, I threw away Anton LaVey’s little black book and the Weegie Board. Had I seen the light? No, I had seen the darkness, the deep black of nothing. I became an Atheist. Not just an Atheist, an activist one. I was angry at those churches filling people’s heads with stuff and nonsense. I began arguing with ministers up close and personal.
Meanwhile, my wife and I were sinking further into depravity. What did it matter? We weren’t hurting anyone, just having a good time. What did it matter how many people were in bed together? It was just sex after all, no one need know and it wasn’t anyone’s business anyway, and we were harming no one.
It wasn’t always sex. Sometimes it was just heavy drinking, jokes and card playing. Yeah, sometimes I had to pull a friend out of a bar before the fight erupted or off the street before the cops came, but boy, ain’t we havin’ fun now?
Except we kept losing babies. Why my wife having a baby that lived beyond birth was about as possible as me believing in God.
Therefore God gave them up in the lusts of their hearts to impurity, to the dishonoring of their bodies among themselves, because they exchanged the truth about God for a lie and worshiped and served the creature rather than the Creator, who is blessed forever! Amen. Romans 1:24-25

Well now, wasn’t that me? Shouldn’t God have washed his hands of me? What was I to him; he certainly wasn’t anything to me. I was just this self-centered, pornography-loving, sex-crazed, writer of horror tales who had pushed God away all his life. If you don’t believe God is love, then why did what happened happen?
I am sitting in the waiting room of a hospital. I wasn’t alone. There were a couple of other men there, happy men, because in a few hours they would be fathers. I wouldn’t be among them. I’d be empty handed again, a man seeing another doomed child die, our seventh.
Then suddenly I was alone in that waiting room…or was I.
Just as mysterious as those times before, the voice in the field and the cross on the wall, I felt something, heard something. I had heart in the beat of that baby’s heart and now I felt confirmed in what I heard, that there was a God. I knew it this time. I didn’t yet know what to do with that knowledge that would come later.
Now we are beginning a Bible Study called, “Experiencing God” and it was suggested we keep a journal. This is the beginning of my journal. I began this study with some trepidation and some Day One questioning. That will be the subject of my next entry.
Posted by nitewrit at 4:48 PM