DO NOT REGARD LIGHTLY...: Part VII of Why Not? - a Perspective on Suffering 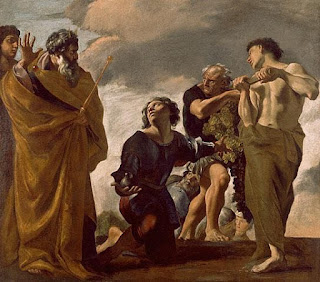 Sin brings its own immediate suffering of guilt, fear and shame, which we call conscience. But sin also causes suffering for others. Cain sinned by killing his brother. Abel suffered a short period of pain before he suffered death. Adam and Eve suffered the consequence of losing their sons, one to death and the other to banishment, plus the agony of one child harming another. Then man grew immune to conscience and built up defenses to justify sin. Conscience didn't constrain Cain nor did it make him regretful after the deed.

Then the LORD said to Cain, "Where is your brother Abel?"

Punishment was needed and punishment entails suffering. Cain was driven away from his home and family to become a wanderer (what the Land of Nod means) and he suffered a life of instability.

Sometimes the punishment was swift and fatal, such as it was for Ananias and Sapphira. Punishment may be a discouragement to others not to commit like sins. It may dissuade the sinner from repeating what they did. Or it may simply put an end to the person's ability to commit a sin through death or imprisonment. Punishment may be an end in itself, but sometimes something else may be in play.
I gave you this passage from Numbers 14:20-38 last time. I will tell you that it added around 38 years of additional suffering to the lives of the Israelites.

Then the Lord said, “I have pardoned, according to your word. But truly, as I live, and as all the earth shall be filled with the glory of the Lord, none of the men who have seen my glory and my signs that I did in Egypt and in the wilderness, and yet have put me to the test these ten times and have not obeyed my voice, shall see the land that I swore to give to their fathers. And none of those who despised me shall see it. But my servant Caleb, because he has a different spirit and has followed me fully, I will bring into the land into which he went, and his descendants shall possess it. Now, since the Amalekites and the Canaanites dwell in the valleys, turn tomorrow and set out for the wilderness by the way to the Red Sea.”

And the Lord spoke to Moses and to Aaron, saying, “How long shall this wicked congregation grumble against me? I have heard the grumblings of the people of Israel, which they grumble against me. Say to them, ‘As I live, declares the Lord, what you have said in my hearing I will do to you: your dead bodies shall fall in this wilderness, and of all your number, listed in the census from twenty years old and upward, who have grumbled against me, not one shall come into the land where I swore that I would make you dwell, except Caleb the son of Jephunneh and Joshua the son of Nun. But your little ones, who you said would become a prey, I will bring in, and they shall know the land that you have rejected. But as for you, your dead bodies shall fall in this wilderness. And your children shall be shepherds in the wilderness forty years and shall suffer for your faithlessness, until the last of your dead bodies lies in the wilderness. According to the number of the days in which you spied out the land, forty days, a year for each day, you shall bear your iniquity forty years, and you shall know my displeasure.’ I, the Lord, have spoken. Surely this will I do to all this wicked congregation who are gathered together against me: in this wilderness they shall come to a full end, and there they shall die.”


We hear about the Jews wandering through the wilderness for 40 years, but what is so often glossed over is they could have entered “The promised land” a lot sooner, 38 years sooner, if they hadn’t disobeyed God and brought punishment upon themselves.

Now, did you figure out what the companion to this punishment was; this other thing that also caused suffering over those 38 years?

When my three children were still very young, we began taking them out to restaurants. Most of the 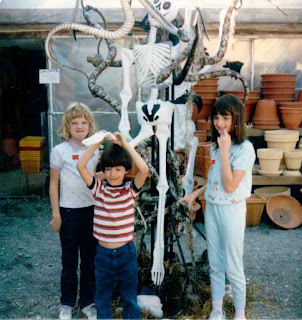 time we took them to a place just east of West Chester called The Ground Round. It doesn’t exist anymore. It was ‘kid friendly” and it was pretty friendly to my wallet as well because they charged a penny a pound for children under 12; so if my child weighted 50 pounds, they got a meal for fifty cents. Obviously this made it a place crowded with families with young children and it tended to be noisy. This was fine with us because if one of ours did act up with all the other distractions no one would be bothered. And there were distractions because in the back was an alcove of arcade games and there were kids wandering about or yelling or standing up in the booths and generally misbehaving.

But not our three, because even though others were allowed to behave in ways you were not supposed to in a restaurant, ours were not allowed to wander around or go play those games. We were employing something so that eventually we could take our children to nice eateries and they would know how to behave. I’m sure sometimes they suffered from our restrictions.

We also made them eat their vegetables, even though sometimes they had to sit at the table for a long time staring at green beans or some other dreaded vegetable. I’m certain that caused them some suffering. (It certainly did Lois and I waiting for them to finish.)

So what is this other reason for suffering we are addressing?

Sometimes we suffer discipline for our own good.

“And have you forgotten the exhortation that addresses you as sons?

“My son, do not regard lightly the discipline of the Lord, nor be weary when reproved by him. For the Lord disciplines the one he loves, and chastises every son whom he receives.”

"It is for discipline that you have to endure. God is treating you as sons. For what son is there whom his father does not discipline? If you are left without discipline, in which all have participated, then you are illegitimate children and not sons. Besides this, we have had earthly fathers who disciplined us and we respected them. Shall we not much more be subject to the Father of spirits and live? For they disciplined us for a short time as it seemed best to them, but he disciplines us for our good, that we may share his holiness. For the moment all discipline seems painful rather than pleasant, but later it yields the peaceful fruit of righteousness to those who have been trained by it." Hebrews 12:5-11

Suffering from discipline can be minor or great. It may be mild, such as being forced to eat your vegetables as a child, even if you sat at the table for a long time missing your favorite TV show.

It could be much more dramatic. 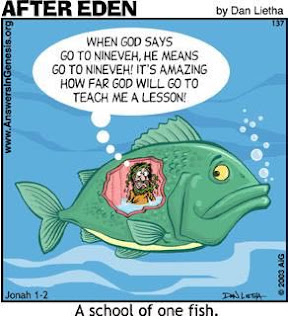 The word of the LORD came to Jonah son of Amittai: "Go to the great city of Nineveh and preach against it, because its wickedness has come up before me." But Jonah ran away from the LORD and headed for Tarshish. He went down to Joppa, where he found a ship bound for that port. After paying the fare, he went aboard and sailed for Tarshish to flee from the LORD. Then the LORD sent a great wind on the sea, and such a violent storm arose that the ship threatened to break up. All the sailors were afraid and each cried out to his own god. And they threw the cargo into the sea to lighten the ship. But Jonah had gone below deck, where he lay down and fell into a deep sleep. The captain went to him and said, "How can you sleep? Get up and call on your god! Maybe he will take notice of us, and we will not perish." Then the sailors said to each other, "Come, let us cast lots to find out who is responsible for this calamity." They cast lots and the lot fell on Jonah. So they asked him, "Tell us, who is responsible for making all this trouble for us? What do you do? Where do you come from? What is your country? From what people are you?"

He answered, "I am a Hebrew and I worship the LORD, the God of heaven, who made the sea and the land." This terrified them and they asked, "What have you done?" (They knew he was running away from the LORD, because he had already told them so.) The sea was getting rougher and rougher. So they asked him, "What should we do to you to make the sea calm down for us?" "Pick me up and throw me into the sea," he replied, "and it will become calm. I know that it is my fault that this great storm has come upon you." Jonah 1:1-12

Then it gets worse for Jonah. He is eventually tossed into the sea and swallowed by a fish (not a whale). Seems he needed a lot of discipline to get him to do what he should have done in the first place.

Discipline doesn't always entail suffering, but sometimes it does. Good parents guide their children. It may be by example. It might be by explanation. Sometimes it is by inflicting suffering. The child is denied a favorite desert for not eating the vegetables. The child is guided to eat a proper diet. There is mild suffering from a mild punishment, but maybe next time the child eats some of those beans.

Train up a child in the way he should go; even when he is old he will not depart from it. Proverbs 22:6

NEXT TIME: NOR BE WEARY

Email ThisBlogThis!Share to TwitterShare to FacebookShare to Pinterest
Labels: Discipline, Suffering, Why Not?