DEGREES: Part VI of Why Not? - a Perspective on Suffering 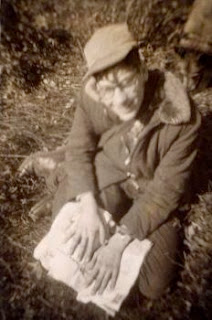 There are degrees of punishment. Some are mild, yet suffice to end bad behavior.
When I was around 13 or 14 I noticed there was something different between boys and girls. I really didn't know exactly what this was, but I knew when girls were around my body felt different and the feeling was both pleasurable and anxious. I was very curious about this and though it had something to do with the way girls’ bodies were changing. They didn’t look like just a boy with long hair anymore.
Down at the local newsstand they sold all kinds of magazines. One section of the magazine racks said no one under twenty-one could buy the items on display. These items were known as "girlie" magazines. I knew what was in them, the secrets I was curious about. I wanted to see these secrets, but was far from being 21. I really wanted to buy the things, but being barred from that opportunity, I began stuffing two or three inside my shirt. This is called stealing.
I shoplifted for quite a while and it was their fault I had to steal. I rationalized I was just trying to satisfy my natural curiosity and would gladly pay for the magazines, but they wouldn’t let me.
Actually, I wasn’t accomplishing anything except more frustration. Most of the women in these magazines were wearing bathing suits or some other brief costume (this was the early 'fifties remember and Playboy wasn't even around yet). Occasionally a model posed in the buff, but the "dirty bits" as Monty Python called them, were somehow always hidden behind a potted plant or fence post or vase or some other oddly placed object. Still I pursued the secret, stealing more, stuffing perhaps four magazines in my shirt at a time.
Then Mr. Charles, who owned the newsstand, caught me. Oh man, right there in public in front of everybody he told me where he was going to put those magazines if he ever caught me stealing again. It was not a place anyone would want a magazine put. I never stole anything after that. It was the end of my criminal career. It only took a punishment of public humiliation and a threat that certainly would not have been carried out literally, but still it was enough to stop my stealing. (I am not counting the cars my friend Richard and I "borrowed" for joyrides a couple years later That'll be our little secret for now.)
Of course, punishment doesn't always deter, (as I said, the cars we "borrowed...) and then a harsher punishment is needed to end such behavior.
Although Mr. Charles' actions stopped me from any future shoplifting, they did not end my lustful desires for those magazines. Not too many years later I found another source for that sin, but that’s a tale for another time.

We find this term throughout the Bible. “Remove this evil from among you.” ( Deuteronomy 13:5; 17:7; 17:12; 19:19; 21:21; 22:21-24; 23:9; 24:7) Often the removal involved the execution of the guilty party. Why? It is because “a little leaven leavens the whole lump” as Paul puts it in Galatians 5:9.
Other punishments are harsh, but not fatal. Adam and Eve were banished from the garden and Cain spend the rest of his life as an outcast and wanderer.
If the punishment is coming from God, then it is just and will fit the crime or the nature of the person being punished. If punishment is being doled out by our fellow man it is not always perfect. Sometimes it is very unfair and even cruel, even illegal. But we must remember sin begets sin. The blame for such injustice should not be aimed at God, because it is the result of the free will we have to reject the will of God. Unjust men reject the guidelines of God through their free will for their own gain and purpose.
Although we all recognize there is much injustice in our world, we also recognize that punishments are often deserved. When our child does something against our will, we punish them in some way, whether this is grounding them, spanking them or taking away a privilege. It is very hard to punish our children, but we would be wrong if we neglected to do it when they stray. It is truly for their own good. In the same way, God would be neglectful if he didn't punish us for our sins. And punishment must involve suffering. We would simply ignore punishment that caused us no pain. In fact, we all measure our committing a "crime" against the possible punishment. If we feel we can bear the suffering more than we can bear not doing what we wish, we will do what we wish.
Most sins cause suffering for others. We have plenty of people committing sins that we suffer for, but how much worse would be the suffering we would be subjected to if there were no punishment inflicting suffering on those who commit such sins? How many sins might we commit ourselves if not for the swords of punishment dangling over our heads? When I hear people say, “Well, they’ll do it anyway”, I cringe. Yes, some will do it anyway, but many will not because the consequences outweigh the desire.
We all need punishment now and again. It always comes as suffering, but if we take heed to its purpose it will work for our betterment.
However, like Ananias and Sapphira, sometimes punishment is harsher and very final. To our human mind some suffering can't be fully understood. It appears extreme and unfair to us, but we don't have the full picture that God sees. Someday we may learn the why of such punishment. In the meantime, we can only accept that punishment is a necessity resulting from our free will to choose sin over God. We must also recognize that all suffering isn't punishment.
There is another reason for suffering somewhat akin to punishment. In some Bible passages we can see it and punishment working side by side. Here is what you should read, Numbers 14:20-38, and decide what was punishment and what was this other thing.

Then the Lord said, “I have pardoned, according to your word. But truly, as I live, and as all the earth shall be filled with the glory of the Lord, none of the men who have seen my glory and my signs that I did in Egypt and in the wilderness, and yet have put me to the test these ten times and have not obeyed my voice, shall see the land that I swore to give to their fathers. And none of those who despised me shall see it. But my servant Caleb, because he has a different spirit and has followed me fully, I will bring into the land into which he went, and his descendants shall possess it. Now, since the Amalekites and the Canaanites dwell in the valleys, turn tomorrow and set out for the wilderness by the way to the Red Sea.”
And the Lord spoke to Moses and to Aaron, saying, “How long shall this wicked congregation grumble against me? I have heard the grumblings of the people of Israel, which they grumble against me. Say to them, ‘As I live, declares the Lord, what you have said in my hearing I will do to you: your dead bodies shall fall in this wilderness, and of all your number, listed in the census from twenty years old and upward, who have grumbled against me, not one shall come into the land where I swore that I would make you dwell, except Caleb the son of Jephunneh and Joshua the son of Nun. But your little ones, who you said would become a prey, I will bring in, and they shall know the land that you have rejected. But as for you, your dead bodies shall fall in this wilderness. And your children shall be shepherds in the wilderness forty years and shall suffer for your faithlessness, until the last of your dead bodies lies in the wilderness. According to the number of the days in which you spied out the land, forty days, a year for each day, you shall bear your iniquity forty years, and you shall know my displeasure.’ I, the Lord, have spoken. Surely this will I do to all this wicked congregation who are gathered together against me: in this wilderness they shall come to a full end, and there they shall die.”
And the men whom Moses sent to spy out the land, who returned and made all the congregation grumble against him by bringing up a bad report about the land— the men who brought up a bad report of the land—died by plague before the Lord. Of those men who went to spy out the land, only Joshua the son of Nun and Caleb the son of Jephunneh remained alive.

There is punishment in these verses, but something else. What?

NEXT TIME: DO NOT REGARD LIGHTLY

More what Scripture says about our suffering:

Beloved, do not be surprised at the fiery trial when it comes upon you to test you, as though something strange were happening to you. 1 Peter 4:12

It is good for me that I was afflicted, that I might learn your statutes. Psalm 119:71

As an example of suffering and patience, brothers, take the prophets who spoke in the name of the Lord. Behold, we consider those blessed who remained steadfast. You have heard of the steadfastness of Job, and you have seen the purpose of the Lord, how the Lord is compassionate and merciful. James 5:10-11

In the day of prosperity be joyful, and in the day of adversity consider: God has made the one as well as the other, so that man may not find out anything that will be after him. Ecclesiastes 7:14
Do not be anxious about anything, but in everything by prayer and supplication with thanksgiving let your requests be made known to God. And the peace of God, which surpasses all understanding, will guard your hearts and your minds in Christ Jesus. Philippians 4:6-7

Email ThisBlogThis!Share to TwitterShare to FacebookShare to Pinterest
Labels: Punishment, Suffering, Why Not?