YES, THAT IS THE PRICE: Part V of Why Not? - a Perspective on Suffering 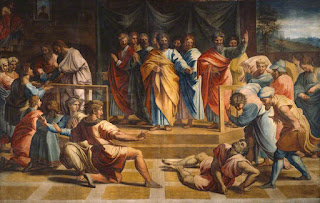 Did you ever try to squeeze the juice back into the orange? It is no easier doing that than finding a rhyme for the word orange. It is impossible. Once Adam and Eve let sin into this world, there was no getting it out through human effort. Humans just added to and compounded sin. There was suffering associated with sin itself, guilt, shame and fear.

And last time, when we wrote about how sin rippled out to cause suffering beyond just the 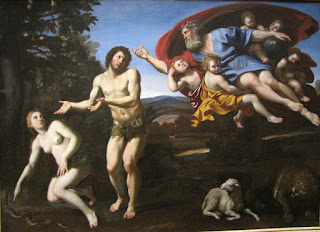 sinner, we didn’t even mention the animals. They suffered from Adam and Eve’s sin as well. When God sacrificed that first animal to provide covering for Adam and Eve how do you think they felt?

“Moral reasoning is a thinking process with the objective of determining whether an idea is right or wrong. To know whether something is "right" or "wrong" one must first know what that something is intended to accomplish.” When we have an infinite reference point, God and Scripture, we have an absolute standard that makes knowing right from wrong easier.

Most of the world today rejects God as the authority and so moral reasoning is not based on a standard of right and wrong, but on the subjective and the people’s desires and we end up with “situation ethics” – It is okay to have sex without marriage when all parties agree and the object is mutual pleasure. It does not matter if there are two, three, four or more parties involved; whether men and women or all the same gender, but it is okay because the desire is mutual pleasure. When you have no infinite reference point, then nothing is immoral.
But when the pregnancies result or the venereal diseases or the broken homes or the arrests because someone feels slighted and yells rape, then the suffering begins and whom do we blame then?

Do we blame God?

If people had accepted the infinite reference point they would have avoided such suffering.

Did you think about any suffering in your own life that was the result of sin? If it was your own sin, did you try and justify it in some way? Did you blame God or someone else for any consequences you suffered because of what you did?

Anyone come up with any Bible character that suffered consequences because of their sin?

Numbers 20:2-12 Now there was no water for the congregation. And they assembled 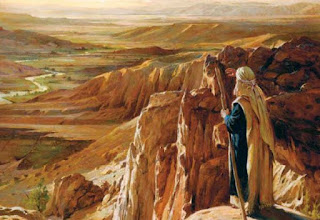 themselves together against Moses and against Aaron. And the people quarreled with Moses and said, “Would that we had perished when our brothers perished before the Lord! Why have you brought the assembly of the Lord into this wilderness, that we should die here, both we and our cattle? And why have you made us come up out of Egypt to bring us to this evil place? It is no place for grain or figs or vines or pomegranates, and there is no water to drink.” Then Moses and Aaron went from the presence of the assembly to the entrance of the tent of meeting and fell on their faces. And the glory of the Lord appeared to them, and the Lord spoke to Moses, saying, “Take the staff, and assemble the congregation, you and Aaron your brother, and tell the rock before their eyes to yield its water. So you shall bring water out of the rock for them and give drink to the congregation and their cattle.” And Moses took the staff from before the Lord, as he commanded him.

Then Moses and Aaron gathered the assembly together before the rock, and he said to them, “Hear now, you rebels: shall we bring water for you out of this rock?” And Moses lifted up his hand and struck the rock with his staff twice, and water came out abundantly, and the congregation drank, and their livestock. And the Lord said to Moses and Aaron, “Because you did not believe in me, to uphold me as holy in the eyes of the people of Israel, therefore you shall not bring this assembly into the land that I have given them.”

2 Samuel 11:1-15 In the spring of the year, the time when kings go out to battle, David sent Joab, and his servants with him, and all Israel. And they ravaged the Ammonites and besieged Rabbah. But David remained at Jerusalem.

It happened, late one afternoon, when David arose from his couch and was walking on the roof of the king's house, that he saw from the roof a woman bathing; and the woman was very beautiful. And David sent and inquired about the woman. And one said, “Is not this Bathsheba, the daughter of Eliam, the wife of Uriah the Hittite?” So David sent messengers and took her, and she came to him, and he lay with her. (Now she had been purifying herself from her uncleanness.) Then she returned to her house. And the woman conceived, and she sent and told David, “I am pregnant.”

So David sent word to Joab, “Send me Uriah the Hittite.” And Joab sent Uriah to David. When Uriah came to him, David asked how Joab was doing and how the people were doing and how the war was going. Then David said to Uriah, “Go down to your house and wash your feet.” And Uriah went out of the king's house, and there followed him a present from the king. But Uriah slept at the door of the king's house with all the servants of his lord, and did not go down to his house. When they told David, “Uriah did not go down to his house,” David said to Uriah, “Have you not come from a journey? Why did you not go down to your house?” Uriah said to David, “The ark and Israel and Judah dwell in booths, and my lord Joab and the servants of my lord are camping in the open field. Shall I then go to my house, to eat and to drink and to lie with my wife? As you live, and as your soul lives, I will not do this thing.” Then David said to Uriah, “Remain here today also, and tomorrow I will send you back.” So Uriah remained in Jerusalem that day and the next. And David invited him, and he ate in his presence and drank, so that he made him drunk. And in the evening he went out to lie on his couch with the servants of his lord, but he did not go down to his house.

In the morning David wrote a letter to Joab and sent it by the hand of Uriah. In the letter he wrote, “Set Uriah in the forefront of the hardest fighting, and then draw back from him, that he may be struck down, and die.”

David certainly knew right from wrong, but still choose wrong. Conscience wasn't going to do the trick after a while. Jump ahead a few centuries and look at a married couple named Ananias and Sapphira. These were two early disciples of The Way. In those early days after the crucifixion, Christians depended on each other for survival. They often lived in communes and they did a lot of sharing of what they had. Members often sold property they owned and gave the cash to the community for support. It wasn't a forced thing, but a voluntary sacrifice for the common good. Ananias had some means and owned property. He sold some lots for the stated purpose of giving the proceeds to the church, but his wife and he decided to keep some of this money for themselves and only give a portion to the church.

When Ananias handed over the donation, Peter confronted him about it being only a portion of the proceeds, and Ananias immediately dropped dead. Three hours later Sapphira, his wife shows up and Peter asks, "Tell me, is this the price you and Ananias got for the land?"

Peter said to her, "How could you agree to test the Spirit of the Lord? Look! The feet of the men who buried your husband are at the door, and they will carry you out also."

Considering these, as well as what happened to Adam and Eve and to Cain, can you figure out another reason we sometimes suffer?

Was this punishment because Ananias and Sapphira didn't give money to the church? No, it was their land and they could have sold it for the full value and that would have been fine. They could have sold it and given a portion to the church and kept the rest as well, except they had vowed to God to give all the proceeds to the church and when they held back a portion they were in essence stealing from God. They probably rationalized no one would ever know and everyone would think they gave the full amount. In other words, they expected to be credited by the others for their generosity. It is obvious they didn't suffer purely from their sin; they showed no shame, no guilt. Apparently no fear either. Ananias boldly went to Peter and handed over the funds and Sapphira came later with no apparent qualms and lied.

Yes, the punishment was pretty final. Sometimes punishments are abrupt and extreme, but these serve as warnings to others who might consider repeating such offences. It is also a reason why some Christians suffer, because they become not an honor to God, but a determent.

The warning given in 1 Corinthians 11:27-32 should be considered in all our behavior as Christians, not just Communion.

Whoever, therefore, eats the bread or drinks the cup of the Lord in an unworthy manner will be guilty concerning the body and blood of the Lord. Let a person examine himself, then, and so eat of the bread and drink of the cup. For anyone who eats and drinks without discerning the body eats and drinks judgment on himself. That is why many of you are weak and ill, and some have died. But if we judged ourselves truly, we would not be judged. But when we are judged by the Lord, we are disciplined so that we may not be condemned along with the world.

"The Death of Ananias" by Raphael (Raffaello Sanzio da Urbino), 1519

"The Rebuke of Adam and Eve" by Domenichino Zamvieri, 1626
“Moses Beholding the Promised Land” by Walter Rane, 1949

Once again, my disclaimer:


Keep in mine, this is my study, thus my interpretation and opinion of what Scripture says. You should study and confirm it for yourselves and not just take my word for anything. This is how you should approach the teachings of any man or woman, pray for guidance and enlightenment, read their references, study the text, confirm they are being true to The Word, ask questions and pray again.
Posted by nitewrit at 10:07 AM

Email ThisBlogThis!Share to TwitterShare to FacebookShare to Pinterest
Labels: Punishment, Suffering, Why Not?