JESUS, MOSES AND PETER, TOO: Part IX of Why Not? - a Perspective on Suffering 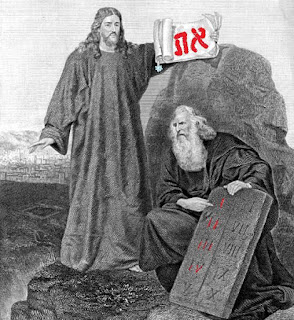 There is one infinite reference point and this is God.

If we have that vertical relationship with God, then we not only have our conscience whispering in our ear, we have a standard, God’s Word, to guide our morality. In this world, even when we follow that standard, we still have suffering we must endure, but we are upheld by our hope in God’s promises.

However, if we turn from God, disbelieve in Him, then we still have sufferings to endure, but no hope.

When we choose to ignore God’s will in our life we sin and sin can bring suffering by the mere act or can bring punishment for our actions. We may also suffer from discipline, used by a loving God to direct us back to the proper path or to strengthen us for the endurance we will need in this life. So reasons we suffer include sin, punishment and discipline.

Before we look at another reason, let’s think about the Israelites wandering for all those years in the wilderness and what their journey might tell us about our own journey in these times.

What is similar between our own plight before we were Christians and that of the Hebrews before they left Egypt?

How might we compare the Israelites to ourselves once they have crossed the Red Sea that may indicate how our lives will be?

We still want more. We get what we need and are quickly complaining it isn’t enough. Manna, meat, water, law.

What could we face that might be fearful to us if we aren’t strong in our faith?

Like the Israelites, although we probably hate to admit it, we sometimes forget what God has promised and we try to take matters in our own hands, or complain about conditions or fear others because they are bigger or smarter, or so we think. Other times we jump in with both feet without fully thinking things through. Often we fail.

Last time I suggested finding a specific Bible character of import in the Bible who failed more than once, was disciplined more than once as well, and yet we certainly look toward him today as a rock of our faith.  Anyone come up with the fellow?

Name some things where he kind of failed.

Luke 5:1-9 Reaction to the great catch of fish.
Matthew 14:22-31  Jesus walks on water and Peter tries, but loses faith.
Matthew 16:13-23 Peter’s recognition of Jesus as Son of God, followed by his rebuking Jesus claim that he would die.
John 13:3-9 Peter refusing to have his feet washed by Jesus at first.
John 18: 1-11 Jesus draws a sword at the arrest of Jesus.

We have a man who swore his allegiance to his leader, insisted he will never betray or desert him. His leader tells him he certainly will do just those things and that very day. The man dismisses such a thought; he is a strong man and a man of his word. But then his leader is arrested and come morning the man denies he even knew his leader. He tries to hide who he is, but then he sees his leader, who gives him a knowing look. The man is shattered inside

Then they seized him and led him away, bringing him into the high priest's house, and Peter was 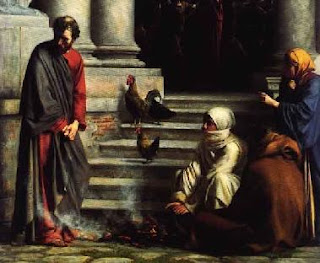 following at a distance.  And when they had kindled a fire in the middle of the courtyard and sat down together, Peter sat down among them.  Then a servant girl, seeing him as he sat in the light and looking closely at him, said, “This man also was with him.”  But he denied it, saying, “Woman, I do not know him.”  And a little later someone else saw him and said, “You also are one of them.” But Peter said, “Man, I am not.”  And after an interval of about an hour still another insisted, saying, “Certainly this man also was with him, for he too is a Galilean.”  But Peter said, “Man, I do not know what you are talking about.” And immediately, while he was still speaking, the rooster crowed.  And the Lord turned and looked at Peter. And Peter remembered the saying of the Lord, how he had said to him, “Before the rooster crows today, you will deny me three times.”  And he went out and wept bitterly. (Luke 22:54-62)

This wasn't the first time Simon Peter failed and was rebuked. He needed a lot of guidance in his discipleship. This was probably the time he finally accepted what he was, a weak and vacillating man, often impulsive, but more bluster than conviction.

Was he perfect after that or were there other miscues?

The Apostles who followed Jesus were not perfect, were they? I think we can find some comfort in knowing the vacillations of Peter, because we are also often vacillators in our walk with Jesus, too, but this tells us we can learn and overcome our weaknesses of faith, if we just keep our eyes on the Lord. We also have to remember we can be prone toward denying we know him or we can be hypocritical if we let the world prevail too often in our lives.

This is why we sometimes need and suffer from discipline.

So, we have talked about three reasons we suffer so far. We sin and suffer mentally and emotionally because of conscience or fear, even if we escape detection. We sin, are detected and suffer some form of punishment inflicted upon us either as retribution or discouragement to repeat our deed. We suffer in some way that guides us toward being a better person or to protect us from a worse harm and worse suffering.

The first comes directly from sin, the second is the result of sin if it is not a result of an injustice against the one punished, but in that case it is the result of the sin of another. The third may or may not involve sin, but most likely does protect us from committing one. There is a riddle, for you.

NEXT TIME: RIDDLE ME THIS

SOME COMPARISONS OF MOSES TO JESUS

1.  Could not identify the artist or date.

Email ThisBlogThis!Share to TwitterShare to FacebookShare to Pinterest
Labels: Suffering, Why Not?