RIDDLE ME THIS: Part X of Why Not? - a Perspective on Suffering 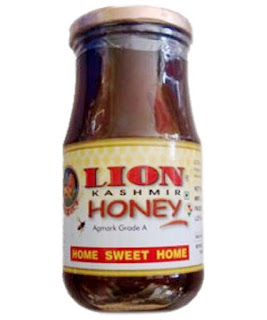 Let’s move on to another reason we may gain suffering.

"(January 2008, Pennsylvania) A 23-year-old man with various body piercings wondered what it would feel like to connect his workplace test equipment to his chest piercings. Several co-workers tried to convince him that it was a bad idea to wire himself up to the electronic control tester, but he ignored their pleas.

"He proceeded to connect two alligator clips to his piercings and hit the test button... When the police and rescue personnel arrived, his co-workers were still trying to revive him with CPR and rescue breathing. They were not successful."

Why does God allow such suffering?

God gave us a brain, now you want God to think for you?

God has given us common sense. Believe it or not if we use it we avoid a lot of suffering, but the videos on “World’s Dumbest…” and “20 Most Shocking” and others all over YouTube show us how often we skip right over common sense to folly.

Yes, we can suffer because of folly.

Folly can be tied to a sin, but just as often may not be. It may be nothing more than plain stupidity. We have a lot of labels on products that state the obvious, such as "remove baby from stroller before folding", because someone did something stupid and suffered for it.

So let's look at another famous Bible character, this one in the Old Testament and he is pretty famous, especially his romance, but boy he could have used more discipline to avoid folly. Unfortunately he didn’t act very prudently at times and his suffering was very harsh indeed.

Do you all get this was Samson?

Samson is one of the heroes of the Bible. He is probably the best known of the Judges of Israel. He was given the gift of supernatural strength. He may have had big biceps, but his brain wasn't the biggest bulge of his body. He actually liked to play mind games, but he couldn't keep his mouth shut about his cleverness and he couldn't keep secrets if a pretty woman was involved. He was strong physically, but he was weak in his morals.

One day Samson killed a lion. A bit later he saw the carcass of the beast with bees and honey in it and he ate some of the honey. (I'm not big on eating something out of a dead animal, which strikes me as a bit of folly in itself, but maybe people were less fussy back then.) He came up with a riddle from this, "Out of the eater, something to eat; out of the strong, something sweet." He made a big bet with some fellows they couldn't guess the riddle's answer. And they couldn't and they wouldn't. Samson's wife, however, begged him for a week to tell her the answer and when he told her, she told them, and he lost his bet, and eventually lost his wife. (See Judges 14 – 15:1-6).

Samson didn’t seem to learn any lessons from this; he just couldn’t seem to resist women. 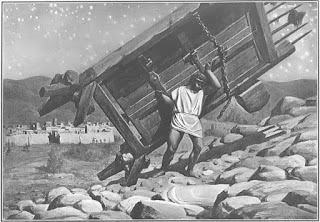 In Judges 16:1-3, he follows a prostitute in Gaza and became surrounded by Philistines. His strength saved him from this situation his lust had placed him in, but he still didn’t learn that he was relying on his God given power wrongly in the folly of his behavior.

This folly was a pattern that repeated itself and led to great suffering for Samson. He later met another pretty woman, not his wife by the way, named Delilah (Judges 16 4-22) and she asked him to tell her why he was so strong. Now to show you how dimwitted Samson was and why this was folly, she didn't stop there. She added to her question: "Tell me the secret of your great strength and how you can be tied up and subdued."

Do you think he might have thought that last part through?

He decided to have some fun with her and told her a lie about seven thongs that haven't been dried. So she tied him with seven such thongs as he slept, then let in a bunch of thugs who tried to subdue him.

You'd think he had the picture by now, but then she asked again and he lied again about rope and she tied him with rope as he slept and thugs came again and they got dispatched again. And of course then he woke up to just what Delilah was doing. 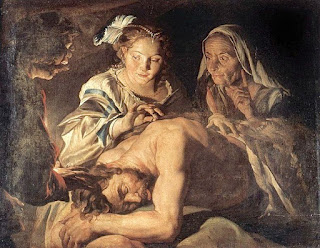 She asked again and he lied again about braiding his hair on a loom and she braided his hair as he
slept and thugs came again and they got dispatched again. Well, three times is the charm it is said, so naturally this time the light bulb went on in Samson's head, right?

Then she said to him, "How can you say, 'I love you,' when you won't confide in me? This is the third time you have made a fool of me and haven't told me the secret of your great strength."

With such nagging she prodded him day after day until he was tired to death. So he told her everything.

"No razor has ever been used on my head," he said, "because I have been a Nazirite set apart to God since birth. If my head were shaved, my strength would leave me, and I would become as weak as any other man."

When Delilah saw that he had told her everything, she sent word to the rulers of the Philistines, "Come back once more; he has told me everything."

So the rulers of the Philistines returned with silver in their hands. Having put him to sleep on her lap, she called a man to shave off the seven braids of his hair, and so began to subdue him. And his strength left him. Then she called, "Samson, the Philistines are upon you!" He awoke from his sleep and thought, "I'll go out as before and shake myself free." But he did not know that the LORD had left him. Then the Philistines seized him, gouged out his eyes and took him down to Gaza. Binding him with bronze shackles, they set him to grinding in the prison. (Judges 16: 15-21)

Samson was often a fool for pretty women. Delilah wasn't his first dalliance, but it was his last. His commitments of adultery were sins, but he suffered his fate through folly.

Folly may not be so obviously a sin as Samson committed. Folly can be simply ignoring what is best for us in pursuing our pleasures. It may not be a sin to go Base Jumping off a high building or a cliff, but if the jumper one day goes splat they will list the cause of death as  “death by misadventure” or folly.

If one does a wheelie on a motorcycle, flips over and breaks their back, they will suffer from an act of folly and do we blame God?

When I go walking up in Brandywine Creek State Park, on narrow high paths, sometimes on mud or 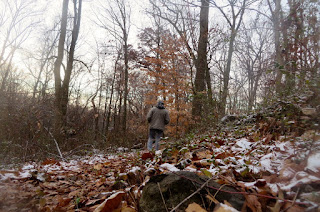 snow, with no cell phone and having not told anyone where I was going to walk that day, I am indulging in folly. Should it be God’s responsibility to see that I don’t fall down a ravine?

Okay, for next time I am suggesting a couple more Bible Characters, but you don’t have to guess.

One is named Saul, not the Saul who became Paul, but the Old Testament King Saul and the other is the Paul, who was once called Saul, the New Testament Apostle Paul. Take a look at something in these men’s lives that points to another reason we may suffer.


More what Scripture says about our suffering:
For I know the plans I have for you, declares the Lord, plans for welfare and not for evil, to give you a future and a hope. Jeremiah 29:11

Blessed is the man who remains steadfast under trial, for when he has stood the test he will receive the crown of life, which God has promised to those who love him. James 1:12

I know how to be brought low, and I know how to abound. In any and every circumstance, I have learned the secret of facing plenty and hunger, abundance and need. I can do all things through him who strengthens me. Yet it was kind of you to share my trouble. Philippians 4:12-14

Who shall separate us from the love of Christ? Shall tribulation, or distress, or persecution, or famine, or nakedness, or danger, or sword? As it is written, “For your sake we are being killed all the day long; we are regarded as sheep to be slaughtered.” No, in all these things we are more than conquerors through him who loved us. For I am sure that neither death nor life, nor angels nor rulers, nor things present nor things to come, nor powers, nor height nor depth, nor anything else in all creation, will be able to separate us from the love of God in Christ Jesus our Lord. Romans 8:35-39

For you have need of endurance, so that when you have done the will of God you may receive what is promised. Hebrews 10:36

Picture of a jar of Lion Kashmir Honey

"Samson Carries the gates of Gaza " by Henri Paul Motte, 1908

The author walking the trails, 2014

Email ThisBlogThis!Share to TwitterShare to FacebookShare to Pinterest
Labels: Folly, Samson, Suffering, Why Not?