TORN IN THE FLESH: Part XII of Why Not? - a Perspective on Suffering 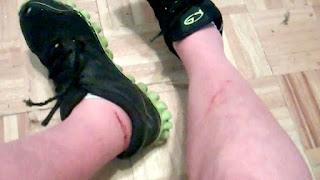 We wrote in our previous  chapter about King Saul and how his pride brought him down; he needed to be humbled.

Pride goes before destruction,
a haughty spirit before a fall. Proverbs 16:18

But what about David? Did David also get a bit full of himself, too? Remember in an early part we looked at David and how he seduced Bathsheba and murdered Uriah the Hittite. David was severely punished for what he did as well, but God did not reject David from being King of Israel as He did Saul. What was the difference?

When we become full of our selves, we lead our selves into trouble and we may also decide we are better than others. We may even begin to abuse others. God may allow some suffering to remind us we are but humans and to keep us humble. We may suffer even greater outcomes if we refuse to be humbled.

The people we looked at so far were humbled because of some sin on their part or because they turned away from God and put themselves up on a pedicel. But what if someone has been forgiven by God, been saved, is putting God first and serving Him faithfully? We have said we all suffer in this world, God pours rain on all and the sun shines on all, the good and the bad. But can even the faithful Christian suffer for the reason of humbling?

Is there Scripture to support this? Did you ever consider the Apostle Paul? Look at Second Corinthians 12:7-10.

To keep me from becoming conceited because of these surpassingly great revelations, there was given me a thorn in my flesh, a messenger of Satan, to torment me. Three times I pleaded with the Lord to take it away from me. But he said to me, "My grace is sufficient for you, for my power is made perfect in weakness." Therefore I will boast all the more gladly about my weaknesses, so that Christ's power may rest on me. That is why, for Christ's sake, I delight in weaknesses, in insults, in hardships, in persecutions, in difficulties. For when I am weak, then I am strong.

Who is saying this?

Paul, who had many reasons to brag. If Paul had to be given a thorn of suffering to keep him humble and focused, then how much more someone like me. I am far weaker than Paul. I dread to think of the monster I would have been if not for certain afflictions I have, weak eyes, psoriasis that mars my skin and many other failings of mind and body.

In 2012, I became caretaker to both my mom and dad over the last six months of their lives and there was a lot of suffering involved by a number of people, my parents, of course, and me and my wife, and a number of others. It was the Grace of God how things worked out through that ordeal that often seemed hopeless and impossible. It was also a very humbling experience for me and it brought home the passage about the farmer who stocked his barns to overflowing. It also directs us back to that Rich Young Ruler who couldn’t pass up his riches to follow Jesus and what his future really held, plus it made another bit of scripture very clear, real and meaningful to me. It is from the Sermon on the Mount: Matthew 6:19-21.

My mother was 92 and my father 94 when they died. Their house was full of all they had accumulated over the 72 years they had been married and individually over more than 90 years; I mean the rooms were full, the attic and the basement. But in the last days of their lives, as my mother died and then less than three weeks later, my dad, all of it was gone. Their car sold, their house sold, all the furnishing, knick knacks, pots and pans, old paint, tools, stored away mementos, everything hauled away. Only the clothes taken to the nursing home remained and after they died even these were gone, given to charity.

I saved only all the photographs and some important papers, and two of my father’s hat, one he wore often in age and his Sailor hat from World War II. Those things were of little value in the end, but what was of value is knowing they both knew the Lord and they were not gone like their possessions, but lived on in Heaven, where their real treasure is.

We begin this journey of life
Down a road we do not yet know.
We see the blossoms of the moment,
Costumed in dancing colors
That entices us like the bees,
To their perfumed petal traps
And we lust to gain their beauty,
To glisten like the rose after a rain.

We watch the sun rise upon the distance city,
Turning the towers of glass to gold,
Shimmering like a river of riches
And our eyes serve us our breakfast of wants
Sprinkled with the sweet sugar of excess.
We glutton for the fat of the land.
Our stressed hearts beat faster
As the grasp of our hands
Fills our veins with the empty
Calories of success.

We ignore the storms of warning
That dare darken our skies and the path
To our ever bigger car and grander house.
We fill our rooms with non-necessities
To gorge our obese egos
And we ignore the dust specks of reality
That swirl about the air to settle
Lightly upon our treasures
As if in echo of some ancient tome.
Not Home Sweet Home,
But ashes to ashes and
Dust to dust.

We do not see the light for the shimmer.
Our eyes are always to the rainbow,
An illusion of sun and water,
A trick of diffusion
And a lure to delusion.
We cannot own the colors,
But can we the Pot of Gold at its end?
But where the rainbow ends
Lies the mire of despair and truth.
When we reach the distance touchdown point
The rainbow fades away
With all we ever gathered
And we are left naked before the eyes of God.


We have looked at suffering for various reasons, because of sin and thus punishment, sometimes as a means of discipline and now to keep us humble. But can we suffer for other reasons? Can we suffer when we haven’t committed a sin, are not really in need of punishment, have been well disciplined and are humbly serving God? And if so, can such suffering serve a purpose or be fair? Or is such suffering a reason to disbelieve in God?

There was something else noted here that is a clue for the next post , but for homework discipline, read Psalm 19, Luke 13 and also find out what happened at Dunkirk and what Churchill said about it as more clues to another reason we suffer, which will be the next posts' lesson. 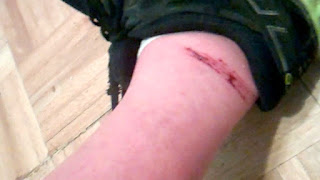 August of 2013. During my daily morning as I circled the Kitchen Garden at Rockwood Museum Park a rose bush branch snagged my bare legs. I could not shake the branch. It dug in and slice up doth my lower extremities.  It really hurt, too.


Even More what Scripture says about our suffering:
For as the heavens are higher than the earth, so are my ways higher than your ways and my thoughts than your thoughts. Isaiah 55:9

In this you rejoice, though now for a little while, if necessary, you have been grieved by various trials, so that the tested genuineness of your faith—more precious than gold that perishes though it is tested by fire—may be found to result in praise and glory and honor at the revelation of Jesus Christ. 1 Peter 1:6-7

And we know that for those who love God all things work together for good, for those who are called according to his purpose. Romans 8:28
I will return again to my place, until they acknowledge their guilt and seek my face, and in their distress earnestly seek me. “Come, let us return to the Lord; for he has torn us, that he may heal us; he has struck us down, and he will bind us up. After two days he will revive us; on the third day he will raise us up, that we may live before him. Let us know; let us press on to know the Lord; his going out is sure as the dawn; he will come to us as the showers, as the spring rains that water the earth.” Hosea 5:15-6:3

The steadfast love of the Lord never ceases; his mercies never come to an end. Lamentations 3:22

Email ThisBlogThis!Share to TwitterShare to FacebookShare to Pinterest
Labels: Pride, Suffering, Why Not?