Look at These Little Things 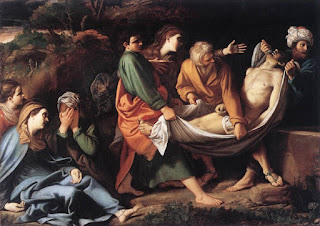 I put this on a status in Facebook yesterday.
"As Christmas approaches we will hear the story of the birth of Christ again. We will hear that he was born to a Virgin, Mary, who had never known any man.
But have you noticed that in death Jesus' body was returned to a virgin, a virgin grave, that is? Yes, Jesus was placed in a new grave, which had never known any body.
A little fact seemingly mentioned in passing in Luke 23, generally skimmed over. But have you stopped to consider what importance this little factoid has in the Resurrection story? Give it some though and go ahead, make a comment of what you think."

Here is the passage in Luke that I am referencing:
Now there was a man named Joseph, from the Jewish town of Arimathea. He was a member of the council, a good and righteous man, who had not consented to their decision and action; and he was looking for the kingdom of God. This man went to Pilate and asked for the body of Jesus. Then he took it down and wrapped it in a linen shroud and laid him in a tomb cut in stone, where no one had ever yet been laid.  It was the day of Preparation, and the Sabbath was beginning. The women who had come with him from Galilee followed and saw the tomb and how his body was laid. Then they returned and prepared spices and ointments.
On the Sabbath they rested according to the commandment. (Luke 23:50-56)

We here these passages over and over during the Easter season, but most of the attention goes to either the brutal beatings and cruel crucifixion or to the Sunday when the women discover the empty tomb. Not much, if any, time is given to Verse 53. I mean, really, they took the body, wrapped it up and laid it in a tomb where no one was ever placed before; so what's the big deal?

It is certainly something of a big deal that Jesus was placed in this tomb since it was a final resting placed newly cut out to eventually hold the corpse of Joseph, a wealthy and influential Jewish Sanhedrin member from the town of Arimathea. It fulfilled a 700 year old prophesy concerning the Messiah that was given by Isaiah.
9 And they made his grave with the wicked    and with a rich man in his death,although he had done no violence,
and there was no deceit in his mouth. Isaiah 53:9 (ESV)

That Jesus' body was taken down by Joseph, with help from Nicodemus, and placed in this tomb is not what the people seeing him crucified would have expected. First of all, Romans were not just satisfied with the agony of a criminal's death on the cross; they wanted to inflict humiliation even after the demise. The body normally would have been left hanging there to rot and after it had it would be carried to a place outside of town and cast into a criminal grave.

So, one important thing in Joseph using his prestige and standing to obtain permission to remove the body and bury it (a very brave act on his part, by the way) is important because otherwise it is possible no one would have known exactly where he was buried. The women might not have been able to see where he was let alone return to anoint him later.

This preparation of the body is essential to know, too. Jesus was dead and the Jewish preparation was neither an embalming as we do today or a mummification as practiced by Egyptians. Jesus body would not be mutilated any more after his death, but simply wrapped in the grave rags and anointed with oils and perfumes to keep the smell down during decomposition. (Remember those gifts of the Wise Men, Frankincense and Myrrh? These are aromatic herbs often used in anointing oils.) Jesus was wrapped by Joseph and Nicodemus with some speed because Sundown was approaching, which would start a Sabbath. See how the woman hurried to buy the herbs to prepare the body, but had to wait to actually do it because of the Sabbath; thus they went to the tomb on a later day to discover the empty tomb.

This empty tomb remark brings us back to the end of Luke 9:53, "where no one had ever yet been laid". This little statement that is almost a throwaway line. But nothing in Scripture can ever be taken as a throwaway line. When you see something seemingly unimportant to the story or something a bit out of place you need stop and consider why is it there?

We can say it makes a neat little circle to say Jesus was delivered to earthy life out of a virgin and then removed in earthly death into a virgin, but that isn't the important thing here. Just as having it known exactly where Jesus' body was buried (and it was further clear because it was officially marked by Roman seals); it was also important to know whose body was missing from there three days later.

In those times in that place among these people a private grave was very uncommon. Think of the complications if the tomb had contained other bodies, some perhaps very recently placed there. No, there was no one else laying inside that tomb but Jesus. There was no miscounting, no mistaken identity possible when the ladies discovered the seals broken and the stone rolled away. It was clear that the tomb was once again as empty as before the men carried Jesus inside and the entrance closed.

Illustration: "The Entombment of Christ" by Sisto Badalocchio, 1610.
Posted by nitewrit at 2:44 PM