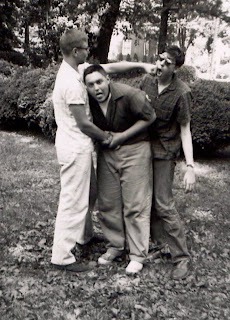 I don't know about you, but it seems I hear the word "confrontation" in the news more and more. Usually it is followed by descriptions or pictures of shouting people waving signs and sometimes fists. Anymore, it appears to go beyond just slogans, chants and threats. Everywhere about we have wars and rumors of wars.

In our daily working world there are individuals spoken of as being very confrontational and this implies a person always spoiling for a fight, argumentative to the extreme and generally unpleasant to deal with.

If you turn on the TV "news," any discussion of issues isn't a discussion at all, but a confrontation between two unbending opposites. This also tends to lead to name-calling and not much substance.  Many go here and there to increase knowledge, ever learning, and never able to come to the knowledge of the truth. "Everyone is senseless and without knowledge;  every goldsmith is shamed by his idols.  The images he makes are a fraud;  they have no breath in them.  They are worthless, the objects of mockery; when their judgment comes, they will perish." Jeremiah 10:14-15

All in all, confrontation is described as a negative thing, somewhat akin to bullying, but very popular as entertainment. Confrontation appears to be the heart and soul of most so-called reality shows, which consist of getting a group of people together where they shout at each other a lot.

Now I am going to come here and tell you to look beyond the pop culture image of Jesus as a gentle, smiling understanding uncle, hugging a child or clutching a lamb tenderly to his breast, and softly intoning "Peace" and say see Jesus the Confrontationist.

Was Jesus the soft-focus flower child poster presented by Hollywood or is that simply what many wish him to be? Is it not easier to invent a savior who will always say, "Don't worry, be happy, I will accept you just as you are," a benevolent Mr. Rogers rather than a Savior who confronts us with ourselves and demands we, just maybe, need to rethink our lives?

What did Jesus say?  “Do not suppose that I have come to bring peace to the earth. I did not come to bring peace, but a sword. For I have come to turn -- ‘a man against his father,  a daughter against her mother,  a daughter-in-law against her mother-in-law— a man’s enemies will be the members of his own household.’ [Refer to Micah 7] Anyone who loves their father or mother more than me is not worthy of me; anyone who loves their son or daughter more than me is not worthy of me. Whoever does not take up their cross and follow me is not worthy of me. Whoever finds their life will lose it, and whoever loses their life for my sake will find it.” Matthew 10:34-39


I think Jesus was a confrontationist right from the beginning.


Being confrontational is not necessary negative and doesn't have to imply that name-calling and fist waving are involved (although we might be surprised to find Jesus engaging in a bit of this). Here is the definition of confront:

Every year Jesus’ parents went to Jerusalem for the Festival of the Passover. When he was twelve years old, they went up to the festival, according to the custom. After the festival was over, while his parents were returning home, the boy Jesus stayed behind in Jerusalem, but they were unaware of it. Thinking he was in their company, they traveled on for a day. Then they began looking for him among their relatives and friends. When they did not find him, they went back to Jerusalem to look for him. After three days they found him in the temple courts, sitting among the teachers, listening to them and asking them questions. Everyone who heard him was amazed at his understanding and his answers. When his parents saw him, they were astonished. His mother said to him, “Son, why have you treated us like this? Your father and I have been anxiously searching for you.”
“Why were you searching for me?” he asked. “Didn’t you know I had to be in my Father’s house?” But they did not understand what he was saying to them. Then he went down to Nazareth with them and was obedient to them. Luke 2:41-51 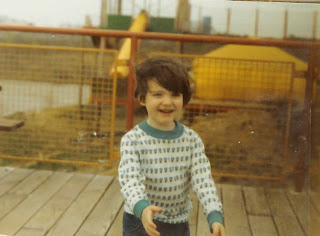 I am a parent. I am certain most parents understand Joseph and Mary's panic. Back when my children were children we went to Sesame Place in New Jersey. Laurel, my eldest was four and my youngest hadn't been born yet. The middle child was about six months old and in a stroller. At one point we separated for some reason; that is, my wife went one way and I another. We met up again perhaps fifteen minutes later and the first words out of my wife's mouth were, "Where's Laurel?"


My reply was, "I thought she was with you."


We rushed about, flitting along the paths we had taken, surrounded by hundreds of small children, searching, searching. We found her pretty much standing where we had parted and what a relief.


But imagine having traveled a great distance to a far city and on the return trip discovering you left your child behind? Joseph and Mary hadn't just walked fifteen minutes away within a confined park either; they had traveled for a day and were probably camping down for the night. They may have covered 20 or 30 miles by then. Just like us, they thought the boy was with other members of the family, now they discover he isn't there. They had to travel back to Jerusalem, now a day away, and try and find him in the big city. It is not altogether clear exactly how long they were separated. It says, "...they went back to Jerusalem to look for him. After three days they found him..." Did the three days include travel time or just the time they actively searched? It could have been five days or three; but whichever, it was a long time not knowing where the child was.


His mother said to him, “Son, why have you treated us like this? Your father and I have been anxiously searching for you.”
“Why were you searching for me?” he asked. “Didn’t you know I had to be in my Father’s house?”


This is not a rebellious child sassing his parents. This was a serious question to parents who knew his origins. I think he was forcing them to confront exactly who he was.


But they did not understand what he was saying to them. Then he went down to Nazareth with them and was obedient to them.


They did not understand, but I bet they pondered it many times afterward.


But before Joseph and Mary located Jesus, what was going on in those three or so days?


After three days they found him in the temple courts, sitting among the teachers, listening to them and asking them questions. Everyone who heard him was amazed at his understanding and his answers.


He was in the temple court with the teachers, Pharisees perhaps, or Scribes, questioning them and giving answers. The teachers were amazed when confronted with his understanding. It had begun.


We don't know anything about Jesus over the next approximate 18 years. Given that we know he never sinned, his very living must have confronted and confounded his neighbors. There must have been questions about someone so perfect, who probably didn't follow the expected course of tradition. When was this nice Jewish boy going to get a wife, have children and settle down like every other boy in town?  Then when most sons had long settled into just that lifestyle, at about age 30, he takes off to confront Jerusalem.


Next: On the Road and In Your face.

Illustration: This photo taken in 1954 most likely by Ronald Tipton show three bots horsing around.
I am not certain of the identity of the boy on the left anymore.
The boy in the middle is my longtime friend, Stuart and I am on the right.
Posted by nitewrit at 7:13 AM

Email ThisBlogThis!Share to TwitterShare to FacebookShare to Pinterest
Labels: A BOOK: Work in Progress 2011, Beyond Common Statements