Confronting Some More About the Question at the Temple 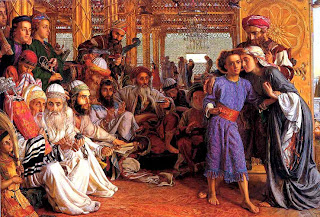 I am going to spend a little more time discussing the question Mary asked Jesus. Here is the situation.

The family of Jesus had traveled to Jerusalem for Passover. Males were supposed to go there for certain Holy Days, although probably many skipped this requirement or sometimes went to some and not others. Passover was the one to which the majority went. We are told Joseph and Mary went every year.

It was an arduous trip. First, they lived in Nazareth and had to travel the 90 miles on foot; perhaps they had a donkey or an ox cart. Whatever, you couldn't hop in the family car and be up the freeway in a couple hours. It could be a dangerous journey as well, so people would usually travel in a caravan of family or friends and neighbors. It is obvious from the text that this was the case here, "Thinking he was in their company, they traveled on for a day. Then they began looking for him among their relatives and friends."

Such a journey was tiring and it had to be repeated going home after the festival. And the event itself was quite wearying. This was not like an outing to Church for an hour or so on Easter or Christmas. This went on for several days in a city that was turned into a constant carnival. The population doubled, tripled and people were everywhere, as were the compliment of vendors and entertainers and pickpockets. There were lines at the Temple for sacrifices, seders to attend, all kinds of hustle and bustle.

As many of us know, we often need a vacation from our vacation. This is especially true if we are attending some grand event, like Mardi Gras. I can completely understand how Joseph and Mary could have left their son behind. I mean, when packing up to leave people were tired and eager to be on the way. There was probably confusion and traffic jams of crowds as all the pilgrims departed. They were traveling with a trusted group, other family members. They set off thinking Jesus was somewhere in line with his cousins and aunts and uncles. They went a day before finding arrangements to spend a night and then discovered no one had seen the boy. These things happen.

So now they return and search for three days. Finally they find the lad in the temple with the teachers.

His mother said to him, “Son, why have you treated us like this? Your father and I have been anxiously searching for you.”
“Why were you searching for me?” he asked. “Didn’t you know I had to be in my Father’s house?” Luke 2:48-49 (NIV)


In my last post, "Confrontationist", I only briefly passed this over as his parents having to confront who he was. I still think that was part of it, but not all, so what did he mean?


A problem arises for us because of the nature of translation. Different languages do not just substitute different words for the same thing. There may be words spelled the same with alternate meanings, such as, "The wind rustled the leaves" and "Did you wind the clock." There are words where they're spelled different, but while their pronunciation is the same, the meaning isn't. Add to this grammatical rules, slang, idiom and voice infection and you end up with signs like this in non-English speaking countries:

"English well talking. Here speeching American", signs on a Majorca shop entrance.
Couldn't have said it better myself.
Sometimes one language has words that other language don't. Chinese does not have gender-distinct pronouns. In my last years at The Bank I had a Chinese supervisor (who has since returned to China). She and I worked well together as a team, but sometimes she would really confuse me about who she was talking about. "He say we need go to meeting and he say me should bring such and such." I would be lost because I had no idea who this "he" was. "Who said this?" "Him." "Him who?" "Mary say."
Okay, then I would understand. Mary was our manager and to me was a she, but to Sherry was a he.
Translation can be tricky and I don't know Hebrew or Greek, which is why I use several Bibles. Here is a case in point where a translator's decision can make a difference in how we interpret a passage.
I quoted the passage from the New International Version (NIV) above, which is:
“Why were you searching for me?” he asked. “Didn’t you know I had to be in my Father’s house?”
The King James translators went with:
And he said unto them, How is it that ye sought me? wist ye not that I must be about my Father's business?
The Wycliffe New Testament goes with:
And he said to them, What is it that ye sought me? knew ye not that in those things that be of my Father, it behooves me to be?
The word "not" ("didn't" in the NIV) is a Hebrew word that always means "not" or "no", but it is a word used only in questions where an affirmative answer is expected. It makes this sentence somewhat like a rhetorical question, except in a rhetorical question no answer is expected. Here, Jesus expects Mary and Joseph to answer, "Yes".
Most of the other words are fine, although some alternate substitutions are available, such as "about" "must" and "behooves", which the NIV basically makes "had", the KIV uses "must" and Wycliffe went with "behooves". Or words translated I or me, which can be "I", "Me", "My".  The word translated "in" by both Wycliffe and the NIV is left out of the KJV. The word's only meaning is "in", but it is only used to denote in a fixed position (space, time, place). The final word means "father".
Here translators have added to that word for father something not there. The NIV adds "house" and the KJV adds "business" I think the Wycliffe comes closest in translation. It leaves "father" as just "Father".
That "business" business in the King James is what confuses us. Some take that question as implying Jesus should have been starting his ministry, but looking at the original and doing a straight up translation, I think we can look at it this way: "Perceive not that I it behooves to be in my Father?"
Where would he be in a fixed position at that time to be in the Father? Why in the Father's house, the Temple. What I think he is saying to Mary and Joseph, expecting them to agree, is, "Why did you spend so much time searching for me? You know me well enough, so why didn't you come to the temple first?"
We could also say, "Why are you searching for God in all the wrong places?"


There is quite a bit to be said about what came after this and someday we will come back to the last few sentences at the end of Luke 2, but for now we'll end here and next time pick up with "On the Road and In Your Face".

Email ThisBlogThis!Share to TwitterShare to FacebookShare to Pinterest
Labels: A BOOK: Work in Progress 2011, Beyond Common Statements