On the Road and In Your Face 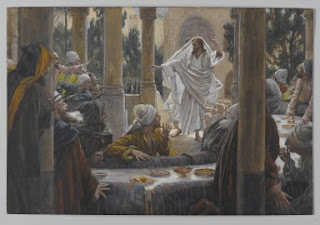 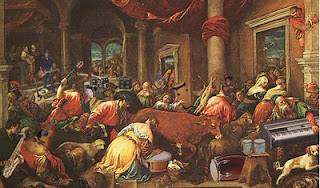 And the Jews' Passover was at hand, and Jesus went up to Jerusalem and found in the temple those that sold oxen and sheep and doves, and the changers of money sitting. And when he had made a scourge of small cords, he drove them all out of the temple, and the sheep, and the oxen; and poured out the changers' money, and overthrew the tables. And said unto them that sold doves, “Take these things hence; make not my Father's house an house of merchandise.”
Was this the Flower-Child so many paint Jesus as being? Or was this not the same sometimes angry God of the Old Testament? Jesus began his mission with a loud confrontation, a violent one, with a whip and tables crashing over; with people shouting and running and with the ones in authority watching.
Then he had a confrontation with those people in which he referred to what would occur three years or so hence. “Destroy this temple, and in three days I will raise it up.” Jesus began the confrontation with the ingrained holders of the Law and religion of the time and place. He would have many such confrontations with the Sadducees and Pharisees from then on. They would dog his footsteps and the thoughts of killing him began early on.
But while here, Jesus did some preaching to the people and performed some miracles and he attracted the attention of one of these Jewish Rulers, one Nichodemus.
And he had a face-to-face confrontation with Nichodemus challenging the man's true understanding of the Scriptures that the man had spent a lifetime studying.
After the Passover, Jesus sets up camp in Judea and begins Baptizing too. This causes, if not directly,  another confrontation between the Jews and the followers of John the Baptist about Jesus' activity.
Not long after, John the Baptist is arrested. Jesus now pulls up stakes and heads into Samaria, where Jews generally would not go. Jesus has caused a ruckus in Jerusalem. He certainly made enemies by what he did. They have kept their distance. But now John has been arrested and if it has come to a point in which authorities, whether Herod or otherwise, feel comfortable doing that to John, they quite well could feel it was safe to come after this guy Jesus.  He's gained some followers, but certainly hasn't yet become as popular as John was. Samaria is not where they would think to look for a Jew.
And in Samaria he has a confrontation with a woman at a well. I mean, she being a Samaritan and he being a Jew, it is even a confrontation to even speak to her and then he challenges her religious beliefs. Read the conversation he has with her. It is full of confrontation.
After Jesus has been through Samaria, he cures a Nobleman's child in Cana. The Nobleman is from Capernaum, I suggest you keep that in mind for future reference.
Now, Jesus goes to his home town of Nazareth, walks into the Synagog and confronts those there by reading Isaiah's prophesy of the Messiah and indicates he is the fulfillment. They don't like this. They try to kill him.
People don't like being confronted with the truth and Jesus was and is a great confrontationist.
Next: Band on the Run

Illustrations:  Jesus Curses the Pharisees by James Tissot, 1886-96
The Purification of the Temple by Jacopo Bassano, 1570

Email ThisBlogThis!Share to TwitterShare to FacebookShare to Pinterest
Labels: A BOOK: Work in Progress 2011, beginnings, Beyond Common Statements, John the Baptist, Traditions