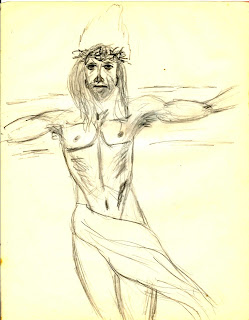 There were together Simon Peter, and Thomas called Didymus, and Nathanael of Cana in Galilee, and the sons of Zebedee, and two other of his disciples.
Simon Peter saith unto them, I go a fishing. They say unto him, We also go with thee. They went forth, and entered into a ship immediately; and that night they caught nothing. John 21:2-3

Well, they had thought so. They had been there, somewhere, peeking out from the corner of windows maybe, watching the procession. A couple of them, like John, had dared to be up close at the end.

When those soldiers had shown up at the Garden, what had they expected then? Not this, certainly, no, this was not what they had signed on for back then. This was the Messiah, they thought, he wasn't going to die and go away and nothing change.

But he didn't exactly go away, did he? He rose from the dead. They had visited the empty tomb and more importantly, they had all seen him, twice, in the last couple of weeks. He came briefly and went. He was gone again. Where?

Where ever it still wasn't what they expected.

Some of them who were there on that first Passover journey thought it would be then. When he threw over those tables, chased out the desecraters, that would begin it. It didn't. Over the next few years, trudging back and forth through the dust they waited for his command for Heaven to strike down their oppressors, but no great lightening bolts ever did. And in the end they dragged him away like any ordinary man and killed him - shamefully.

Yeah, somehow he had come back to life, but he still didn't do what they expected. You would think someone dead yesterday and alive today could rouse up the forces to overthrow even Rome. Instead he quietly said, "I am sending you."

Sending us? What are we going to do? Who will listen to us? It's a scary world out there, a dangerous world. Those people who hung you on that cross might crucify us if we so much as talk too loudly. Where do we go? Who will follow? We followed him and lost our place even within our own religion. We are viewed by the priests, by the Pharisees, by even some in our families as blasphemers. Many of those who once listened to you, when you stood on the hills and preached, now see us as fools who they want nothing to do with.

And you tell us you are sending us that whom we forgive will be forgiven. Well, who in this world will forgive us? Frankly, it would be better to shut our mouths and keep a low profile. We saw you alive again. We believe that, but maybe it is a personal thing nobody else wants to hear.

So I'm going fishing. I'm going to do something I like to do that will occupy my mind with something other than all that is confusing me and filling me with fear. I'm not good at this Assistant Messiah stuff. What I'm good at is catching fish.

Except me and my fellow fishermen have been at it all night and haven't caught so much as a cold. He came along one day back in the beginning and told us, "Follow me and I'll make you fishers of men." Now we can't even catch a fish.


It wasn't very different for Peter and those other Apostles on that day 2,000 years ago then for we Christians today. Jesus had a fling being a rock star for a time, but now the whole area knew he'd been brutally killed. He was a nice fellow, he said some wise things now and again, but you saw what happened. The State certainly didn't want anything to do with him. You got a little cult that thinks some itinerant preacher came back to life, fine. Just keep it to yourself. There is no room for religion in government, except for Caesar as God. And as for the rest of the people, well, believe in fairy tales if you wish, but don't bother me with your fantasies.

If I tell you Jesus is going to return -- soon -- will I not face the same disbelief, skepticism, rejection and possible danger that Peter and the Apostles faced on the day they decided to go fishing? I understand exactly how they felt. But what happened?

When the morning was now come, Jesus stood on the shore...


What we must not lose sight of is that when morning comes Jesus will be standing there. We know that. So why fear? No one can stop that morning from coming and we will be there on that Sonrise even if those of this world kill us. And we have the Holy Spirit within us. Look what that small cult did once they had the Spirit in them.


Today is Easter. To much of the world this is furry bunnies and colored eggs. To we Christians it is everything.


Illustration was drawn by the author when he was 16.
Posted by nitewrit at 6:34 AM