Within These Next Few Waning Hours 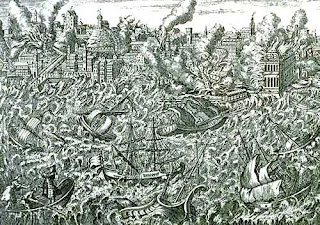 I suppose it is possible this could be the last post, a time I should be saying goodbye, so long, been nice to know you, my friends, what with Judgment Day coming by the weekend. And if I believed that this would be so, then this would be such a piece.
But I don’t believe it.
Still I am disturbed by some of the mocking comments being made about those who do.
It especially bothers me to hear a Sunday sermon opened this way: “Just so you know just in case the crazies are right and we don’t get to see each other next Sunday … listen today like this is the last day [here]”
The objection is not to simply say, “In case this thing happens, and we are not here another Sunday,  listen as if it’s true.” My objection is referring to these people as “crazies”.
As a Christian I will tell you what I believe. I believe in a God who created the world and universe. I believe in Jesus Christ. I believe in the Virgin Birth. I believe in the Bible. I believe in the Resurrection. I believe in salvation and a Judgment Day. I believe Jesus will return as He said He would, and following the daily news and seeing how events are occurring and the world is lining up; I believe that the Second Coming is not far off.
I presume this is what many Christian preachers also believe. So are we the “crazies”?
I would never call someone of faith a crazy or a nut case or a wing nut because they believe something different than I.  If someone professed to being Jewish or Muslim or Buddhist or Hindu or Atheist (and yes Atheism is a matter of faith), would you dare to call them “crazies”? Obviously I believe they have placed their faith in the wrong beliefs. If I did not, then I would be a Jew or a Muslim or a Buddhist or a Hindu or an Atheist.
Obviously I believe Christianity it true. Otherwise, why would I be a Christian? 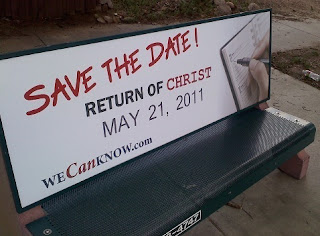 But because I disagree in where someone else has placed their faith, does not mean I think they are “crazies”.
I do not think Howard Camping or all these many people who have accepted his claims that May 21, 2011 is Judgment Day are nuts, nor do I think they are stupid. I just think they are wrong. If you have read the material put out by Camping you would not find some rambling mad utterances. It is very structured and intellectually presented. It is even convincingly logical, given Mr. Camping’s interpretation of Scripture. It is very understandable why many people would be willing to embrace it as the truth. 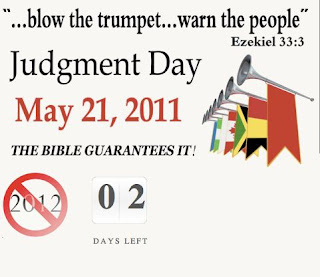 On the Family radio site there is a countdown clock. Today it reads “2 days to go”. But given Mr. Camping’s forecast of how it will begin, it is in reality just a bit more than one day away at the time I am writing this. It is his stance that a great rolling earthquake will begin at 6:00 PM on Saturday, May 21. It will begin in the South Pacific and will follow the time zones around the world, quaking in each area at their hour of 6:00 PM.
If this part of his prediction is true, then we here in my part of the country will know if it is happening sometime between 10:00 and 11:00 PM Friday evening. Why? Because it will already be 6:00 PM Saturday in the South Pacific just over the International Date Line. Of course if nothing happens at that time, it will not necessarily mean Judgment Day will not come on Saturday, only that this part of his calculation is wrong.
Of course, I expect nothing to happen, no worldwide earthquake, no Rapture, no Judgment Day…not yet.
If I am wrong and they are right, then nothing I have wrote matters. If they are right and I am wrong, then I will be among those facing condemnation by God, for that is what they believe. They believe if you cannot accept that Saturday is Judgment Day it is because you are not truly saved even if you think you are.
However if they are wrong and I am right, then on May 22 we are going to have a mass of disappointed and disillusioned people around this world, not the least of which will be Mr. Camping. This will not be something to gloat about. These will be people on the verge of losing faith in anything and some may be facing a very uncertain future. Some of these people have spent their finances and now will face difficult times. Some have split their families and will need healing. These will be people we should not mock, but instead show compassion for, reach out to with love and understanding. We should be prepared to help them back to faith in something and lift them up from their folly back into a life of true hope.
These people are not “crazies”, but like many, many others, they are just folks who lost their way for a while.
Posted by nitewrit at 5:23 PM

Email ThisBlogThis!Share to TwitterShare to FacebookShare to Pinterest
Labels: A BOOK: Work in Progress 2011, credibility, Folly, Tolerance, Written 2011 in Delaware