Is It a Thousand or What? 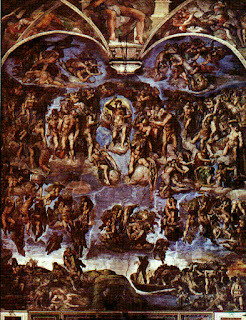 This is a follow-up to what I posted yesterday.
But, beloved, be not ignorant of this one thing, that one day is with the Lord as a thousand years, and a thousand years as one day. 2 Peter 3:8 (KJV)


And I saw an angel come down from heaven, having the key of the bottomless pit and a great chain in his hand. And he laid hold on the dragon, that old serpent, which is the Devil, and Satan, and bound him a thousand years, And cast him into the bottomless pit, and shut him up, and set a seal upon him, that he should deceive the nations no more, till the thousand years should be fulfilled: and after that he must be loosed a little season. Revelation 20:1-3 (KJV)
As perhaps many of you are aware, or have seen many of the placards and billboards, this year has been proclaimed the last.  According to Howard Camping Judgment Day will occur on May 21, 2011, a date that has all ready begun somewhere in the South Pacific this very day. In fact, as I begin to write this, it is 12:45 AM, Saturday, May 21 appropriately enough in the Christmas Islands. Thus, if Camping is correct, in less than 12 hours the great earthquake will begin.


I do not believe any such thing will happen, but many do. Camping has said if you dispute him, you must do it from Scripture. There is not enough space here to take on that challenge  and I am not such an expert on the Bible to feel equipped to do so. However, there is a statement he has made that popped out at me as making no sense.


In his explanation of the timeline, he has said there is no 1,000-year millennium as traditional Christian prophesy often teaches. It is stated in Revelation that Satan is seized after Armageddon and bound for a 1,000 years after which he is let loose a little bit. He contends the 1,000 is not physical time, but is symbolic. In his scenario, Satan was bound at the time of Christ's crucifixion and resurrection. Satan was thus chained up for 1,955 years, until 1988 and then released. In 1988 upon release, Satan then took over all the churches in the world and so everyone who is truly saved should get out of the churches.


He has also stated that during this 1,955 years that Satan was bound, he was still able to roam about seeing whom he could devour like a roaring and sowing "tares" in the churches. I do not quite understand how he could be bound while also roaming free. Perhaps somewhere Mr. Camping explained that.


Note that I said Mr. Camping. I have seen and heard him called in the news media a Preacher or Minister. He is not a minister. He is a civil engineer, turned founder of a Christian radio network called Family Radio. Up until 1988 he was a member in good standing in a Reformed Christian Church, but never more than an Elder. I would call him a Bible scholar.


As long as we are correcting the media, many have gotten great glee in reporting Mr. Camping called for Judgment Day in 1994 and it didn't happen, so he wrote another book. This is technically true, but the original book was 1994?, with a question mark, and he did say in it there was a possibility that 2011 might be the actual year if 1994 wasn't. He has not left himself any wiggle room this time. He has unequivocally and absolutely guaranteed May 21, 2011 is it.


Mr. Camping has explained the Devil being bound at the Resurrection for 1,955 year as the fulfillment of the 1,000 year bondage spoke of in Revelation. So how does he explain adding 955 more years on?


He references the passages quoted at the beginning of this post. With 2 Peter 3, He interprets "one day is with the Lord as a thousand years, and a thousand years as one day" as simply symbolic.
Explaining that numbers are used both figuratively and symbolically in Scripture, he goes on to note we must determine how a number is used, a fact I have no argument with. It is his view that Peter as well as John in Revelation are using it symbolically here. It is his opinion that Peter did not mean a day was literally a thousand years or vice-versa to God, but simply meant "a long period of time". This is also how he viewed the 1,000 years mentioned in Revelation.


This is possible, and certainly in the case of Peter could be exactly right. Peter was calming people impatience about Christ not yet having returned. He began this way: Knowing this first, that there shall come in the last days scoffers, walking after their own lusts, And saying, Where is the promise of his coming? for since the fathers fell asleep, all things continue as they were from the beginning of the creation.


Obviously he is telling the believers that what seems a long time to them is nothing to God. I don't see that as the case in Revelation. I feel where it says a 1,000 years there it means a 1,000 years.


Even so, Mr. Campings stretching 1,000 years to 1,955 for the convenience of his timeline is...well...it is a stretch. (I'm not even going to get into his placement of this event where he did.)


A problem with his argument is he is fine with using the 1,000 equals a day concerning other events, for instance, the 7,000 years between when the Great Flood came and this coming Saturday. Here he uses such things as the seven days of Creation, Daniel's Week and the seven days between when God told Noah to get in the Ark and when the rain began as indicating there would be 1,000 years from then to Judgment Day.


In these situations as described by Mr. Camping I don't think you can have it both ways.


There is an irony that Mr. Camping should rely so heavily on Second Peter. In that Book, Peter spends much time warning against false prophets and those who interpret Scripture to their own devices.


A second thing I would like to touch upon is knowing or not knowing the date of the Second Coming. Mr. Camping is emphatic that true saved Christians will know the date and the hour. One reference he uses to support this is from 1 Thessalonians 5:1-10:
But of the times and the seasons, brethren, ye have no need that I write unto you.
For yourselves know perfectly that the day of the Lord so cometh as a thief in the night. For when they shall say, Peace and safety; then sudden destruction cometh upon them, as travail upon a woman with child; and they shall not escape. But ye, brethren, are not in darkness, that that day should overtake you as a thief.
Ye are all the children of light, and the children of the day: we are not of the night, nor of darkness. Therefore let us not sleep, as do others; but let us watch and be sober. For they that sleep sleep in the night; and they that be drunken are drunken in the night. But let us, who are of the day, be sober, putting on the breastplate of faith and love; and for an helmet, the hope of salvation. For God hath not appointed us to wrath, but to obtain salvation by our Lord Jesus Christ,Who died for us, that, whether we wake or sleep, we should live together with him.
But I see this differently than he. If a thief is going to come to rob your house, you will not know the day or time. However, if there have been a number of burglaries in your neighborhood, then there are signs that such a criminal attempt could be imminent. You would then take protective measures and you would be sober and aware, so when such a crook came you were not caught by total surprise and are ready.


The people who feel safe, who get drunk or go to sleep without care are those who do not believe Christ will come again or dismiss the signs around them. They are taken by surprise.


We Christians need to believe in what Jesus told us and be ever ready for his appearance, not in fear, but in hope. But we shouldn't not so focused on the specific day or hour we lose sight of everything else. That would be counterproductive.


As to going as far as naming the hour, 6:00 PM, that is even more problematic, but this piece is already very long, so we will leave that go for now.


It is now 10:30 here. Less than seven hours to the earthquake begins in the South Pacific, so we shall see, shan't we?

The illustration is "Judgment Day" by Michelangelo.
The full 2 Peter passage:
Knowing this first, that there shall come in the last days scoffers, walking after their own lusts, And saying, Where is the promise of his coming? for since the fathers fell asleep, all things continue as they were from the beginning of the creation.
For this they willingly are ignorant of, that by the word of God the heavens were of old, and the earth standing out of the water and in the water: Whereby the world that then was, being overflowed with water, perished: But the heavens and the earth, which are now, by the same word are kept in store, reserved unto fire against the day of judgment and perdition of ungodly men.
But, beloved, be not ignorant of this one thing, that one day is with the Lord as a thousand years, and a thousand years as one day.
The Lord is not slack concerning his promise, as some men count slackness; but is longsuffering to us-ward, not willing that any should perish, but that all should come to repentance. But the day of the Lord will come as a thief in the night; in the which the heavens shall pass away with a great noise, and the elements shall melt with fervent heat, the earth also and the works that are therein shall be burned up.
Seeing then that all these things shall be dissolved, what manner of persons ought ye to be in all holy conversation and godliness, Looking for and hasting unto the coming of the day of God, wherein the heavens being on fire shall be dissolved, and the elements shall melt with fervent heat? Nevertheless we, according to his promise, look for new heavens and a new earth, wherein dwelleth righteousness. Wherefore, beloved, seeing that ye look for such things, be diligent that ye may be found of him in peace, without spot, and blameless. And account that the longsuffering of our Lord is salvation; even as our beloved brother Paul also according to the wisdom given unto him hath written unto you; As also in all his epistles, speaking in them of these things; in which are some things hard to be understood, which they that are unlearned and unstable wrest, as they do also the other scriptures, unto their own destruction.
Ye therefore, beloved, seeing ye know these things before, beware lest ye also, being led away with the error of the wicked, fall from your own steadfastness. 2 Peter 3:3-17 (KJV)
Posted by nitewrit at 10:32 AM

Email ThisBlogThis!Share to TwitterShare to FacebookShare to Pinterest
Labels: A BOOK: Work in Progress 2011, credibility, Folly