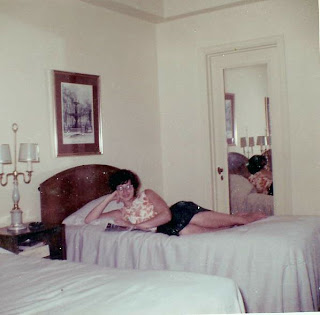 The first few years of our life together went rather smoothly. Both of us were doing well on our jobs. There were promotions and raises. Outside of work we were enjoying something of the good life. Besides eating out regularly, going to dances at Sunnybrook Ballroom in Pottstown and plays at the Valley Forge Music Fair we traveled. We went to Gettysburg, toured Virginia and spend several days in New York staying at the Waldorf-Astoria (that is Lois pictured there on the left in 1962).

Also in the year we got married I won runner-up in the Writer's Digest Writing Contest. My desire was to become a self-sustaining author. I spent as much time writing as I could. Typically we would get home from work, have dinner and I would disappear into the den to write for the evening. I would come back down around ten and we would talk (or other things) until the wee hours of the morning. We were young, sleep didn't seem high on our list of things to do.

We could always talk. We talked most of the time on our dates. The other thing we could always do was sex. I was a virgin when we got engaged, but I admit I wasn't when we married. There was no way either of us could restrain ourselves for that whole year. We took any opportunity alone to go at each other. This sometimes had funny results. One time we were at my home and my mother and grandmother left for some church function. My dad was on the road somewhere. We waited until mom's car went down the road and then we began undressing. We just reached the state of au natural when we heard the kitchen door open and my mother coming through the house calling my name. We quickly began pulling on clothes. My mom knocked on my bedroom door and I had to let her in. She said they had forgotten something and then they left again.  At the time Lois wore a pair of leopard spotted pedal-pushers. I turned around with a sign of relief and saw her pants were on inside out.

So when Lois became pregnant two years after we married it was sooner than we wished, but hardly surprising. We were concerned about the financial implications, but these were outweighed by the prospect of parenthood.

In August 1963 Lois was home from work. I am not certain why she didn't go in that day. She was in her fifth month of term. I got a call from her later that morning. She said she was losing the baby and asked me to come home.  I asked if she had called the doctor.

"Yes, " she said, " I told him I was going into labor. He said that was impossible. He would send something from the drugstore for my pain and not to bother him again."

I said it, but knew right away was not going to happen. I left work immediately, but I still had to walk to the train station, catch the next train, which might mean up to a half hour wait and ride it for an hour, then drive the last few miles. When I finally walked in she was in our bedroom. I entered and she was shivering on the bed. There was blood.

It was in the bathroom in a basin. It was a boy. We would have named him Sean.

I called the doctor and he came. He wasn't happy about coming. He went into the bedroom, was there a few minutes and came out.

"What should we do with the baby?" I asked.

He brushed by me. "You can throw in the garbage for all I care," he said and left.

I was stunned. Lois went back to work in a few days, but she came home upset and depressed. Despite her own ordeal no one gave her much sympathy. They were too busy talking about and feeling sorry for Jackie Kennedy, who had just lost a premature baby two days after its birth.

Her depression was understandable, but it was a harboring of something that would increase as the years went by that had no relationship to this loss. It is still not clear if this physical loss was a factor in those that would be loss in the future.

Meanwhile, my life had also changed. A fellow my age had started working in my unit and we became friends. He had been going to Temple University on a football scholarship, but gotten injured and loss his grant. He couldn't afford the tuition, but he was now working during the day and going to college at night. I didn't know such a thing as evening college existed. I thought you had to go to a campus and live in a dorm and spend big bucks to attend university. He suggested I try it.

That summer I enrolled at Temple as a non-matriculating student. I took Introduction to Sociology with plans to major in that field if I though I could handle college. I got straight A's in the course and the professor told me I should definitely enroll that fall. I did, taking as many credit hours as allowed to a part-time student. By September I was working full time, often with overtime, and going to school three nights a week. I still tried to squeeze in writing everyday and keep up my time with Lois.

During this same year Ronald finished his term of service with the Army and moved back to the area. He took an apartment in a nearby town and invited Lois and me to dinner. We had a great evening talking about old times. Toward the end of the evening Ronald told us something which at first we didn't quite understand.  He said he had gone to a club in Philadelphia. The address had been given him by a friend. He didn't think he would go, but he did. There were only men in the club and during the night they danced with each other. He danced, too, and he enjoyed it and thought he would go back. He left it at that. It wasn't until Lo and I discussed this that we grasped what he was telling us.

I refused to believe it at first. When we were double-dating during high school I always thought Ron was the most awkward guy I had seen around girls, but I never thought it more than a deep shyness. Homosexuality was not talked about much in the period I grew up. I knew it existed. Guys at school would call someone they didn't like "queer" as the ultimate insult. The only other information I had was from sleazy magazines were homosexuals were either blackmailed or beaten up. I became concerned for Ronald, fearing these things would happen to him. I wrote him a letter. We had an exchange of letters and I in my naiveté and he in a period of sensitivity mistook what we said to each other and as a result stopped speaking.

At this time I discovered an odd thing. When I would get into a conversation with people at work I would begin to shake. I was all right when discussing business, but if the conversation turned to other things and became serious I felt my body was quivering and that I couldn't control my speech. I decided to do something about it and went to a clinic and met with a psychologist. I didn't tell my parents because they would have had a fit. Psychologists and psychiatrists were people only insane people visited. Anyone who went to one for therapy was stigmatized in their world. But I didn't feel this way. I knew I had to do something before this shaking I felt interfered with my job. 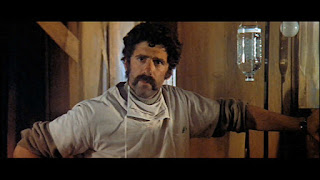 The Psychologist was almost a caricature. He resembled Elliott Gould in M*A*S*H (pictured right), the bushy hair and mustache. He wore jeans with one of those corded sports coats with the leather patches on the elbows. Invariably he would enter, sit down and plop his feet up on his desk. He wore these causal shoes with thick crepe soles. I did most of the talking. He asked if I had any recurring dreams. I said I often dreamt I was being chased by a bull or a gorilla. He said these dreams meant I hated my father. O-o-o-k-a-a-ay? My father and I didn't have the best relationship, but I didn't think I hated him. He really took interest when I mentioned buying several books on homosexuality. I explained about Ronald, my fears of what might happen to him and that I wanted to understand it. He decided my concerns about my long-time best friend indicated I was homosexual. If there was one thing  I knew for sure, I was not a homosexual. I stopped going to the clinic.

Oddly, my feelings of shaking during conversations stopped at that point.

These years, though, continued to be a yo-yo of ups and downs. Lois seemed to revive from her loss of Sean all right, but she was beginning to have some paranoia about the neighbors and an occasional bout of depression or migraine that laid her up. Then one day she came home and said she had been fired.

She said there was office politics going on and some manager were trying to "get her boss" and somehow that resulted in her being terminated. Whatever the reason, we now had a financial problem. Our income was more than cut in half because she was actually making more than I was. We went from having luxuries to not being able to meet our monthly bills. After several months we decided we had to sell the house.

We put the house up. There was a real estate slump at the time. Worse, we came under physical threat. A neighbor saw an African-American couple visit the house and the next thing we had a delagation of our "friendly" neighbors threatening to break all the windows in our house if we dared consider selling to a black person. I told our realtor we would sell to anyone who wanted to buy the place. This did not exactly ease the tension, but maybe it sped up the sale. The realtor suddenly found a white couple who purchased the house almost immediately after this confrontation. We sold at a slight loss.

We moved in with my father-in-law, possibly one of the biggest mistakes of my life, but we were naive and didn't know what else to do at the time. It was to be one more address on our journey down Desolation Row.