Getting Here Part VI: Change is Blowin' in the Wind 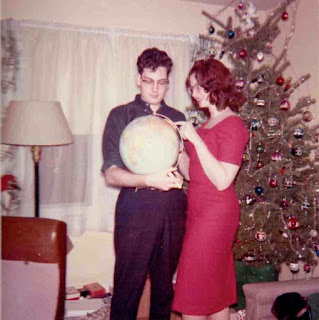 1965 was a pivotal year. Time fired change our way with the rapidity of a machine gun. Rat-a-tat-tat, we were hit by another blast. We had lost our house, been threaten and moved in with my father-in-law, an uncomfortable situation. Within the course of those months I was to be drafted, have four separate jobs, something of a nervous breakdown, give up totally on religion and have a dust-up with the powers that ran Upper Darby. Change wasn't just blowin' in the wind, it was a bloomin' hurricane. No wonder we were wondering where in the world we were.

It wasn't long after we moved that President Johnson, near the end of August 1965, ordered the drafting of married men. (I wonder how many marriages that broke up? A number of men had rushed into marriage during the early years of the Vietnam War because marriage gave them a deferment.) Funny how the letter started off with "Greetings" as if it was a Christmas Card. I had to report to 401 North Broad Street for a pre-induction physical. I wasn't thrilled about this. I knew exactly where I would end up and it wasn't a safe place. However, to make a long story short, I suffered from psoriasis. It had appeared in childhood. At this time it was pretty light, but there was one patch on my shoulder and that was enough to get me classified as 1-Y. [Registrant available for military service, but qualified only in case of war or national emergency. Usually given to registrants with medical conditions that were limiting but not disabling (examples: high blood pressure, mild muscular or skeletal injuries or disorders, skin disorders, severe allergies, etc.).] I would have been the rare bird thanking God for a skin disease, except back then I didn't thank God for anything. In fact, around that time I pretty much dismissed God altogether from my life.

Lois and I began looking for a church. Things had obviously went a little south in our lives and suddenly we got interested in religion. But we weren't so much seeking God as a sanctuary from reality. We were looking for a warm and fuzzy place, not a Savior. After all, we were very nice people a bit down on our luck and in need of some commiseration.

We didn't find it. We didn't find anything. We started by visiting a number of "mainstream" churches in the area (Presbyterian, Baptist, Episcopalian) and one big Methodist Church, even though we were trying to avoid the denominations of our parents, which were Methodist and Lutheran. These churches were not very welcoming. They were actually rather intimidating. No one spoke to us. Some people even glared at us. Was it my long hair? I don't know, but we distinctly felt unwelcome.

There was a large Roman Catholic Church a few blocks from where we lived then. I began to go there in the morning before work and attend Mass. I bought a book on Catholic beliefs, a Rosary, a miraculous metal. This was what religion should be, I thought, all this ritual and objects to handle. I felt since I was doing something I was earning my way to Heaven. We ( I talked her into it) decided to join the Catholic Church. I knew this would give both our families fits, but by this time I was doing a lot of stuff for just that reason, to gave my family fits.

But the night the Priest was supposed to meet with us to start the process he didn't show up. He stood us up without so much as a phone call.  So that was it for Catholicism. If the Priest doesn't care, why should we?

Our search didn't end here. We just moved a bit further from the religious center. The Unitarians were our next stop. I had no idea what that name meant, but a church was a church to me as long as it claimed to be Christian,  but that requirement ceased with the Unitarians. This was a church in downtown Philadelphia. We attended their service, but this was really a big pep rally for the next protest to be held. We sat on the floor in a big room and talked strategy for our march for civil rights or against the war or to save the earth or to save a rare flea endangered by a highway project, whatever was that particular weeks reason for anger. Now Lois and I were already getting involved in protests we didn't need more. This wasn't what we wanted from a church.

Having believed we had exhausted Christianity at this point, we turned to the Ethical Society. We went to their Sunday morning service. We entered and some music was played as in my old church, a kind of prelude. Some songs were sung at times as well, but none of this music was a hymn. They were Classical pieces. Someone said something corresponding to a prayer, but it was a poem. A text was read, but it was a piece by one of the great philosophers. A sermon was given focused on the greatness of mankind, saying that the problems of the world would eventually be solved by the technological advances made by man. Everything was on the unique quality of humans to do good and save the world, like humans had did such a wonderful job of that so far.

It was all I could do not to laugh. When we left I said it was a joke. If you don't believe in God and think mankind is the end-all and be-all, why are you parodying what could easily be a Methodist service, simply replacing anything that smacks of God with some human produced babble?

There were sudden changes in my work situation during the remainder of 1965 as well. I had been doing quite well and become the supervisor of my unit, but I had grown restless. I had also learned when I first took a job in this unit I had made a tactical error. It was a service division, not a clerical one. I learned from others this was a dead end. There was a stigma against people working in the service divisions and once there it was very difficult to get a position in the clerical areas, but those were the areas where advancement was possible. Of course, I was just eager to make some more money and was getting bored with what I was doing because it had become routine to me. I applied for and got a job as Traffic Control Clerk.

It was a grade level improvement and more money, but it was located in the back of a warehouse at the refining yards. My job was basically handling the paperwork and dispatching the various trucks in and out of the refinery. I was on the job two weeks and I had a breakdown. I am not certain why. Maybe the isolation and dreariness of my office, but more likely I was dealing with men much like my father. At any rate, I came to work one morning and I began to cry and I couldn't stop. Totally embarrassing, especially around the type of men I worked with there. But they didn't make fun of me. They were concerned and the boss sent me home.

I was sure my career at ARCo was done. I was depressed and worried and thought I would be fired. Personnel, (you know, what they call Human Resources today) called me back in after a week. They gave me a job as a Parcel Post Clerk back in the mailroom and told me I would be offered the next Level 6 job that opened. That was the Level of the Traffic Control job, so not only wasn't I fired, I wasn't even going to be demoted.

About a month later I was offered a position in Accounts Receivable. So in the course of less than two months I had been Supervisor of Addressograph, Traffic Control Clerk, Partial Post Clerk and Ledger Clerk.

Then that winter Lois announced she was pregnant again. The Doctor warned her to be careful. Given her history with the first baby and his examination, she had a number of problems that could put the pregnancy at risk.

Near Christmas there was a bad snowstorm. Two blocks away a stop sign was knocked down when a car skidded into it a couple weeks earlier during another storm. Despite the snow my parents came down to visit on Christmas. My father was a professional driver, snow didn't deter him. However, they almost had an accident because of the downed stop sign had still not been replaced. They had no way of knowing the traffic on the cross street didn't have to stop, because it looked like the street they were on was the right of way. 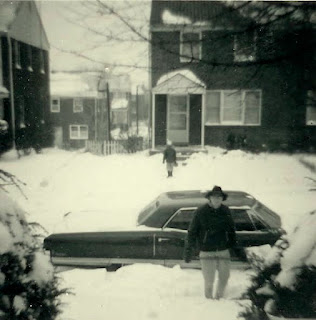 Then a few days later, Lois fell on a sidewalk nearby because it had never been shoveled and the snow had packed to ice. What angered me was this sidewalk was at the home of the Local Committeeman for the Republican Party, which at that time had a stranglehold on the government in the borough. It was the law that sidewalks be cleared of snow within 24 hours of the end of a snow storm. I had shoveled (picture on right is me in that 1965 snow doing just that). Everyone on our street had shoveled, except this politician.

My wife's family (she had several living on the street) were upset. They knew my wife's condition, plus they were also already angry because snowplows had plowed out the streets of the upper-income sections of the township, but not our streets, resulting in the trash trucks being unable to come thought and the garbage was piling up. They said we should all write letters to the Mayor complaining about this Committeeman and the lack of plowing. Well, you know how it goes, I wrote a letter and no one else did. I wrote about the stop sign and the trash and especially about my pregnant wife's fall.

Next thing I know the Committeeman is knocking on the door. He accused me of lying. Then he said I didn't even know where he lived. I said, "Come on" and led him outside and up the street to his house, which still hadn't been shoveled. He was furious. He called me a name and I though he was going to hit me, but he turned and stomped into his home.

Not long after my wife gets a tearful phone call from her aunt. Her uncle had a patronage job with Upper Darby, now someone in government called and said if her niece's husband didn't stop writing letters they were going to fire her husband. She begged Lois to tell me to shut up. I tried to get her family to band together, but in the end I stopped for their sake. This was not to be my last confrontation with bad politicians. (Probably why I don't like them much even today.)

My wife did end up losing that baby, too. It wouldn't be the last.

These winds of 1965 were to blow us in an entirely different direction in our lives and eventually to a very dark place.